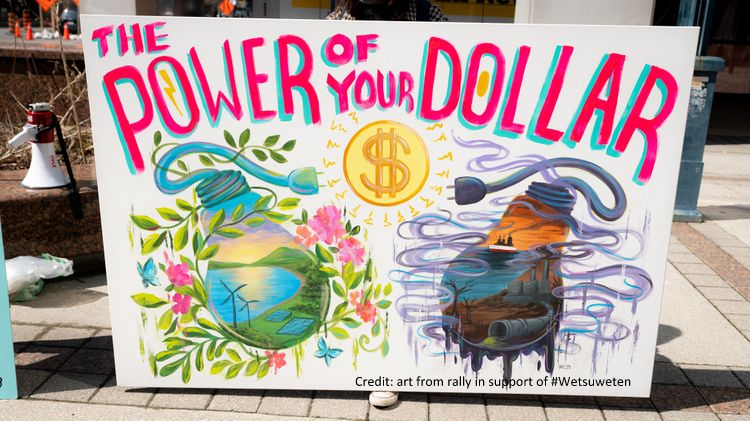 The Royal Bank of Canada (RBC) abruptly cancelled the in-person portion of its AGM as Wet’suwet’en chiefs were set to confront the bank about financing the @CoastalGasLink fracked gas pipeline. That was not a coincidence? Carole Holmes of GASP says “we will not be bystanders as Canada’s big banks accelerate the climate crisis. Delay is death.”

“Delay is death.” When UN Secretary General Antonio Guterres spoke those words in late February, my blood ran cold and my temper hot. He was referring to the UN’s grimmest climate change report ever, calling it “an atlas of human suffering and a damning indictment of failed climate leadership.”

I am the proud grandmother of a beautiful and spirited 16-year-old granddaughter. But for many years I have been deeply worried for her—and for all children everywhere—given the growing chaos of climate change.

Delay is death. Those words fired me up. Along with my partners at GASP (Grandmothers Act to Save the Planet) they boosted my resolve to stand up and speak up and do everything in my power to give my granddaughter and her generation a fighting chance to inherit a livable world. I owe it to her. We all do, for all our children and grandkids.

My generation – the Baby Boomers – and all adults living in wealthy, Western countries like Canada can no longer act like innocent bystanders as the ravages of the climate crisis take their growing toll. Our addiction to fossil fuels and our endless need to consume – gas guzzling vehicles, second homes, jet vacations – make us all complicit in causing these climate disasters and, yes, responsible for the mounting casualties caused by delayed action.

We are all culpable, but there are key gatekeepers controlling the fate of our grandkids. It helps to name them so we can act to stop them, or push and prod them to change course fast.

First are the fossil fuel companies and their CEOs. As far back as the late 1970s, Exxon learned from its own chief scientist that carbon dioxide from burning fossil fuels could warm the planet to catastrophic levels. Like the tobacco companies before them, the fossil giants chose to bury the truth, buying time as they continued to rake in colossal profits.

Then come governments. For 30 years, federal Canadian governments of all stripes have dragged their heels, failing to take the bold action necessary to phase out coal, oil and natural gas, while ushering in the new green economy. Per capita, we still have one of the world’s largest carbon footprints.

Fossil fuel gatekeepers also include the world’s largest private banks. Without their enormous investments – USD $4.6 trillion in the six years since the Paris Climate Agreement was signed – most of the world’s coal, oil and natural gas corporations would shrivel and die on the vine.

Canada’s Big Five banks – RBC, TD, Scotia, CIBC and BMO – all rank in the top 20 of these investors. They vowed last year to become ‘net-zero’ good guys by 2050, pledging to reduce their financed greenhouse gas emissions to zero. But according to the just released Banking on Climate Chaos 2022 report, all five increased fossil fuel financing by nearly USD $70 billion in 2021 compared to 2020. 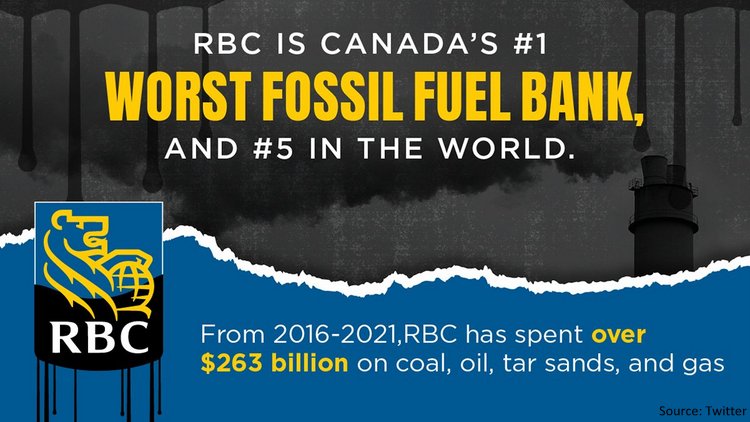 RBC’s overall record is especially troubling; it ranks #5 on the ‘Dirty Dozen’ list of all private banks financing fossil fuels.

Here’s the thing: so much of this money is our money. As Big Five bank customers, mutual fund investors, and pensioners, we’re adding fuel to the climate crisis with our cash, thus allowing banks to keep playing Russian roulette with our grandkids’ lives.

All five have Annual General Meetings in April. Will any of them, like La Banque Postale in France, have the courage to stop funding fossil fuel expansions immediately (as the International Energy Association says must happen to achieve net zero emissions by 2050), and get out of all oil and gas financing by 2030?

All banks everywhere need to do this to avoid driving global temperatures above the Paris climate target of 1.5º Celsius. As gatekeepers for the world’s children, they have a choice.

We at Grandmothers Act to Save the Planet will not stand by while our grandchildren’s future is sold out from under them.

(Carole’s article was previously published as an opinion piece in the National Observer.)