Below 2C
Home Environment Extinction Spending $1.8 Trillion A Year To Finance Our Own Extinction 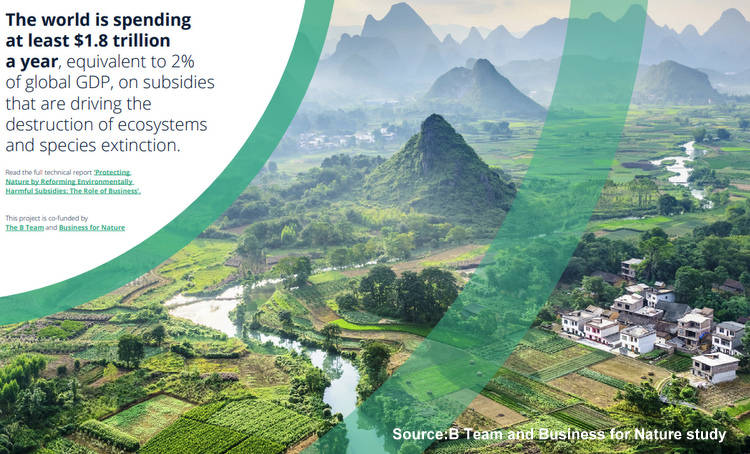 “The world is spending over $1.8 trillion a year, equivalent to 2% of global GDP, on subsidies that are driving the destruction of ecosystems and species extinction,” finds a recent study commissioned by Business for Nature and The B Team. The authors of the study are Doug Koplow and Ronald Steenblik.

(This article is sourced from the Financing Our Survival report, the media release and the Business for Nature website.)

Financing Our Own Extinction

The study provides an estimate of the total value of environmentally harmful subsidies (EHS) across key sectors. It finds the fossil fuel, agriculture and water industries receive more than 80% of all environmentally harmful subsidies per year, depleting natural resources, degrading global ecosystems, and perpetuating unsustainable levels of production and consumption, in addition to exacerbating global inequalities said the media release.

“Environmentally harmful subsidies (EHS) are government programs that encourage unsustainable production or consumption, and in doing so harm nature by exhausting natural resources, degrading global ecosystems, and damaging planetary health. These subsidies were established with good intent: to promote economic access and solve social issues such as food security, or improve access to energy and clean drinking water. However, often the intended social goal of subsidies has been pursued without consideration of their environmental impacts. This siloed approach has contributed to the many crises afflicting the natural world, placing livelihoods and economies at risk.”

Impact of these subsidies

“The World Economic Forum ranks climate action failure, extreme weather and biodiversity loss as the top three threats facing humanity, fuelled in part by the large scale of public money flowing to harmful industries and practices.” The result is that:

Breakdown of EHS across the economy

The study provides an estimate of the total value of environmentally harmful subsidies (EHS) across key sectors.

The benefits of eliminating and redirecting harmful subsidies are many:

“This report is critically important. Transformative action on incentives and subsidies harmful for biodiversity will be decisive this decade to bend the curve of biodiversity loss. I strongly believe this timely report will help generate the requisite political momentum and contribute to the global biodiversity framework.” — Elizabeth Mrema, Executive Secretary, Convention on Biological Diversity

Harmful subsidies must be redirected towards protecting the climate and nature, rather than financing our own extinction. — Christiana Figueres, Former Executive Secretary of the UNFCCC; Member, The B Team

ICYMI:
Why Are Canadian Banks and Insurance Companies Still Financing Russian Oil
Unless We End Financing of Coal, It Will End Us
Frankie the Dinosaur Says Listen Up People: Don’t Choose Extinction