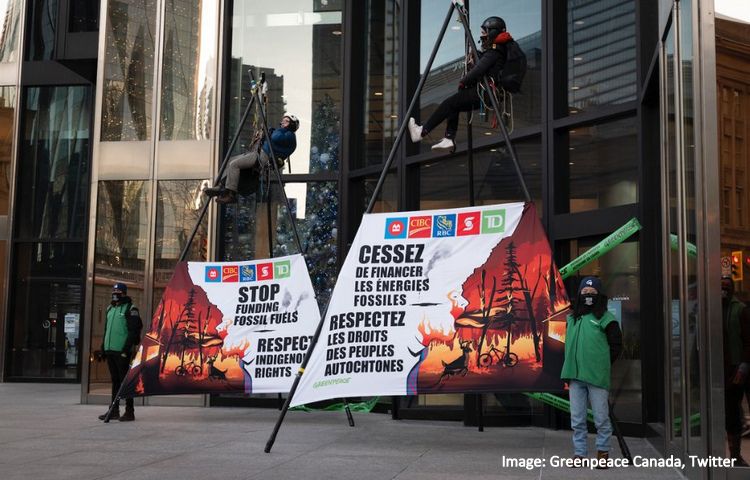 The movement to pressure Canadian banks to stop funding climate chaos and abusing Indigenous rights came to life in 2021. And it’s heating up as we head into 2022. Climate activists will be relentless in their pursuit to drive banks away from fuelling the climate crisis. The following article was previously published in Common Dreams.

According to Greenpeace Canada’s latest report on fossil fuel financing, Canada’s five largest banks are among the world’s top 25 funders of coal, oil, and gas. Collectively, Canadian banks have provided more than $820 billion to fossil fuel corporations since the 2015 signing of the Paris agreement, which seeks to curb greenhouse gas pollution in order to avert catastrophic global warming. That sum is over 13 times more than the $60 billion the federal government has invested in climate action during the same period.

“I’m a middle-aged dad with a mild fear of heights who has been politely asking Canadian banks to stop funding fossil fuels for decades,” Keith Stewart, a senior energy strategist at Greenpeace Canada and one of the climbers, said in a statement. “I’m dangling from a tripod today because the banks’ response has been to continue providing over a hundred billion dollars a year to fossil fuel companies.”

UPDATE: We asked @RBC CEO David McKay to come down from his tower today to hear stories of climate impacted communities.

He didn’t show up. #FossilBanks care more about profits than people.

But we won’t quit until they hear us. Keep the pressure on >> https://t.co/lftADffXKY pic.twitter.com/gvCZBgUyTF

“That money pipeline is fueling the climate crisis,” said Stewart. “After what has happened in B.C. this year we are not going to let bank CEOs ignore the deadly consequences of their actions.”

Since the signing of the Paris Climate Agreement in 2015, Canada’s top 5 fossil banks have dumped over $800 BILLION into fossil fuel projects – the exact opposite of what the climate science says needs to be done to ensure a de-escalation of extreme weather events and a livable planet. — Greenpeace Canada

Stewart was referring to last summer’s record-shattering heatwave in British Columbia—which killed hundreds and sparked multiple wildfires, including one that incinerated the entire town of Lytton—and last month’s devastating floods in the same province.

During his address at last month’s COP26 climate summit in Glasgow, Canadian Prime Minister Justin Trudeau alluded to the destruction of Lytton, a disaster of the sort that scientists say will become increasingly common in the absence of ambitious policy changes. Such warnings haven’t stopped Canada from forging ahead with its plan to expand the production of fossil fuels—the key driver of the climate crisis—over the course of this decade.

According to Greenpeace Canada, demonstrators at Tuesday’s action urged bank CEOs to “come down from their towers and accept charred wood fragments from Lytton homes, with the hope that the fragments would remain on the bankers’ desks to remind them of the life-and-death consequences of all of their investment decisions.”

Juan Ortiz, a spokesperson at Greenpeace Canada who joined others in handing out flyers at the protest site, said that “we are in the heart of Canada’s banking district today to interrupt bankers’ business-as-usual because it is destabilizing the climate, destroying biodiversity, and violating Indigenous rights.”

Activists also encouraged passersby to watch video testimonials from Lytton, Shackan, and Kamloops residents whose lives have been turned upside down by extreme weather.

“We call on CEOs like RBC’s Dave McKay to meet face-to-face with communities devastated by climate change and fossil fuel projects, listen to their lived experience, and take corrective actions,” said Ortiz.

Ortiz, Stewart, and the other activists pointed to RBC’s financing of the Coastal GasLink pipeline as an example of a project whose funding should be stopped immediately due to the violation of Indigenous rights and failure to obtain free, prior and informed consent from the Wet’suwet’en hereditary chiefs.

More broadly, Greenpeace is imploring Canadian banks to immediately halt all financing of new fossil fuel projects, develop a plan to slash financed emissions in half by 2030, and ensure that any funded projects obtain the free, prior, and informed consent of Indigenous communities.

More than 9,400 of the group’s supporters have demanded in writing that the nation’s most powerful bank CEOs—Daryl White of BMO, Victor Dodig of CIBC, Dave McKay of RBC, Brian Porter of Scotiabank, and Bharat Masrani of TD—stop funding fossil fuels.