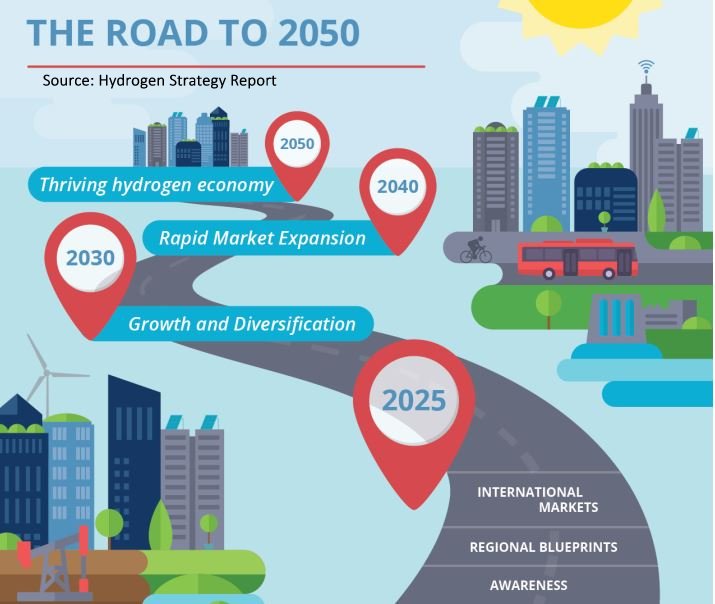 The colour of hydrogen matters. Canada’s hydrogen future as outlined in its December 2020 Hydrogen Strategy Report will be predominantly based on blue hydrogen — that is hydrogen  produced using “natural gas,” which is fossil gas. To reduce the process’s carbon footprint, the blue hydrogen has to  be combined with  carbon capture utilization and storage (CCUS), which is the plan. However, if green hydrogen were to be used instead, it is produced using electricity created using renewable energy. No extra process is needed.

Blue Hydrogen Is Not Clean

There are multiple challenges with blue hydrogen. To date, CCUS technology has failed to live up to its promise. Furthermore, most of the fossil gas is likely to be obtained through fracking with its associated climate and other environmental risks.  As well, industrial-scale solar and wind is competitive with fossil gas for making electricity. Finally, adding the cost of carbon capture (if it ever proves effective) will reduce competitiveness  — making blue hydrogen, quite frankly, a pre-stranded asset in the making.

The National Observer reports that “for Canada to secure its place in the future hydrogen market, it is maintaining fossil fuels as the centrepiece of its strategy today. Its hydrogen strategy, published in late 2020, makes clear that while there is potential to produce hydrogen from renewable energy sources with zero greenhouse gas emissions, the short-term focus is to produce it from natural gas in concert with the fossil fuel sector.”

The talk in Canada is to use the euphemism of ‘clean hydrogen’  — Paul Martin, Hydrogen Science Coalition

Prime Minister Justin Trudeau and Minister of Natural Resources Jonathan Wilkinson like to refer to this fossil-fuel-produced hydrogen as ‘clean’ because its production will include the capture of most of the carbon emissions resulting from this process. But only their magical thinking can make blue hydrogen clean.

Why the Colour of Hydrogen Matters

Jonathan Wilkinson’s flippant attitude towards Canada’s hydrogen strategy is highlighted in a recent Energy Mix piece. Wilkinson would like to “…change the nature of the conversation to one that focuses on the carbon intensity of the hydrogen. And it may well be that some countries have a preference for hydrogen that’s derived from one pathway or another but at the end of the day, if you can produce hydrogen that has zero or virtually zero carbon emissions, I mean, from my perspective, who cares where it comes from?”

The Energy Mix article however points out who might care even if Wilkinson himself doesn’t:

The National Observer article goes on to point out Canada’s refusal to sign the Beyond Oil and Gas Alliance (BOGA) at COP26 in Glasgow in 2021. “This initiative is not in Canada’s interest, as its aim to phase out the oil and gas sector conflicts with Canadian policy ensuring the sector has a sustainable role in a net-zero world,” read a staff briefing note.

Full Speed Ahead for Fossils

The reality in Canada, unless there is intervention, is full speed ahead with the expansion of fossil fuels.The Trudeau government climate narrative conceals an alarming vision in which the oil and gas sector will continue to play a vital role in Canada’s net-zero plans in spite of his statements about the need to phase out fossil fuels. Climate delay—the new climate denial—is on full display in Canada. And Prime Minister Trudeau is its strongest advocate.

“While we are encouraged to see the new Canada-Germany agreement for production and export of green hydrogen, we are concerned that the door is being left open to blue hydrogen fuel. Blue hydrogen, produced from fossil fuels, is not a clean fuel, and in fact may contribute just as much greenhouse gas emissions as burning gas, or even more. The world needs truly clean, renewable energy sources now.” — Keith Brooks, programs director at Environmental Defence Canada

“We welcome the race toward a zero-emissions economy. We need to run that race with fair rules of engagement for communities and companies…liquefied natural gas is not a legitimate contestant in this race. It won’t cross the finishing line in time to help Germany or the planet.” — Louise Comeau, director of climate change and energy solutions at the Conservation Council of New Brunswick.

ICYMI:
Capping Oil and Gas Emissions: Production Cuts Are Essential
Senator Rosa Galvez Pushing For Climate-Aligned Financial Sector
Inspiration Is Not Enough: Are We Ready For The Talk?