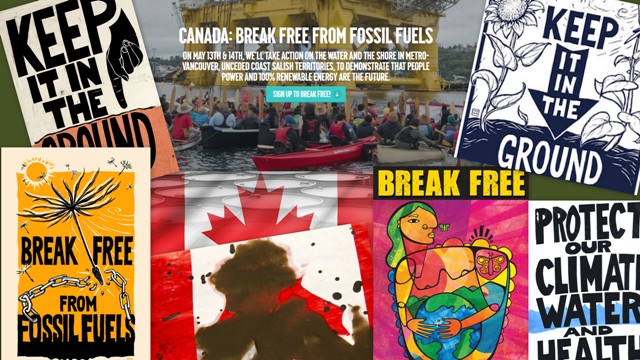 Break Free is a movement and a call for action. The planet is heating up faster than anyone expected. February 2016 was the most abnormally hot month in history, by a heart-stopping margin. Scientists didn’t expect this kind of temperature increase for decades. Parts of the Arctic were 16 degrees Celsius warmer than they should be.

Break Free – a Call for Action

Following the COP21 summit in Paris we are still left with these urgent needs: more action to keep fossil fuels in the ground and an acceleration in the just transition to 100% renewable energy. Large-scale Break Free mobilizations will shine a light on those needs. They will spread information about crucial new and existing local campaigns to fight fossil fuels and continue to shift political power away from the fossil fuel industry and towards grassroots groups who are at the frontlines of a great energy and economic transformation. Break Free will open the doorway to more and more people willing to increase their own commitment and to demonstrate the moral urgency of ending the use of fossil fuels and choosing renewables.

May is Our Moment

The fossil fuel industry is relentless, pushing our climate to the brink at an accelerated pace. That’s why people on every continent have been making plans for a wave of action from May 4 to 15. May was picked as a moment that worked to mobilize across a dozen or more countries across the globe.

By the thousands, we will show the world that now is the time we need to Break Free from fossil fuels. We need a rapid transition from the fossil fuel economy of the past to a 100% renewable and clean energy future.

Break Free is targeting some of the most iconic and dangerous fossil fuel projects all over the world. In Canada, on May 13-14, 350.org and Greenpeace Canada are working with community organizations, and in consultation with Indigenous frontline communities, to challenge tar sands pipelines and the fossil fuel industry leading us down the path to climate catastrophe.

In May, the National Energy Board will make its recommendations on the Kinder Morgan pipeline and the federal government will start its final review for the project. We know that dangerous tar sands infrastructure will only lock us into the fossil fuel economy and make the shift to 100% renewable energy all the more difficult. We know that Kinder Morgan doesn’t have the consent of communities and Indigenous Peoples. And, we know that with projects like this, a devastating spill isn’t a matter of if, but when.

Canadians are ready for an end to the fossil fuel era but our political leaders are not. Just last month, the Prime Minister publicly announced that we need tar sands pipelines to make the transition to renewable energy. That seems pretty counter intuitive! New fossil fuel infrastructure would lock us into decades of oil-dependence — having catastrophic impacts on the climate. Not to mention, more pipelines would mean expanding Canada’s tar sands which have had devastating downstream impacts on Indigenous communities.

Let’s send a clear message to the Prime Minister: we need a commitment to supporting clean technology and Indigenous rights. What better time to send that message than right as the National Energy Board announces its recommendation for the Kinder Morgan pipeline?

Other posts on Canada’s political denialism: