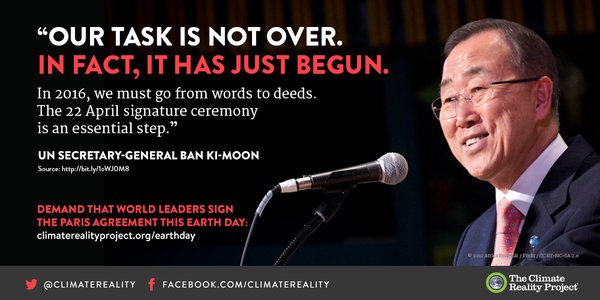 As we move beyond the Paris Agreement, the climate credibility of the 195 countries which are signatories to the agreement will soon be tested. In December countries submitted their emissions reduction targets known as NDCs — Nationally Determined Contributions. Now it’s up to world leaders to live up to them.

As many nations make calls for the swift ratification of the Paris Agreement, the profound impacts of climate change is hitting home — 2016 is expected to be the hottest on record and more extreme weather events hit across the globe. Fifty five countries – representing 55 per cent of global emissions – need to ratify the agreement for it to formally take effect, and early support is in countries’ interest according to a UN aid.

Failing to ratify could leave countries out in the cold when it comes to deciding just how the new agreement will work, potentially putting them at a diplomatic and economic disadvantage. As world leaders prepare to head to New York for the biggest ever UN signing ceremony – a symbolic first step towards fully implementing the agreement – calls are growing for countries to urgently adopt the deal and enact national laws and policies in support of the rapid global decarbonisation and the 2C temperature threshold agreed to in Paris.

Momentum for climate action continues to grow at all levels. On Earth Day (April 22), 130 countries are expected to officially sign the agreement — another collective acknowledgement of the climate threat and an important first step towards implementing the Paris Agreement. Meanwhile the business sector, investors and citizens continue to up the stakes in the global transition to a 100 percent renewable future.

Delivering on Paris means turning promises into action. Four small island states have already passed laws in support of the Agreement and countries from China to Germany and the UK are examining new legislation to take them closer to their Paris pledges. The sooner all governments move towards implementation and action, the sooner they will embark on their collective abandonment of dirty energy.

Countries getting ahead of the curve are reaping the benefits. Renewables are booming. Clean energy investment outstripped that in fossil fuels two to one in 2015, and doubling capacity by 2030 could boost GDP by $1.3 trillion, create 24.4 million new jobs and save 4 million lives a year. Taking swift action now will see countries reap the climate, economic and health benefits of the transition, while falling behind will see them lacking clout on the international stage and stuck on volatile dirty energy sources.

Forward-thinking governments and economies should be racing to New York, pen in hand. But signing is just the first step. If countries were serious about the collective vision that drove the Paris Agreement, every single Party should already be setting a date to enshrine its Nationally Determined Contribution into national law. This and only this will give us a fighting chance of keeping temperature increase to 1.5C.” ~ ClientEarth CEO, James Thornton