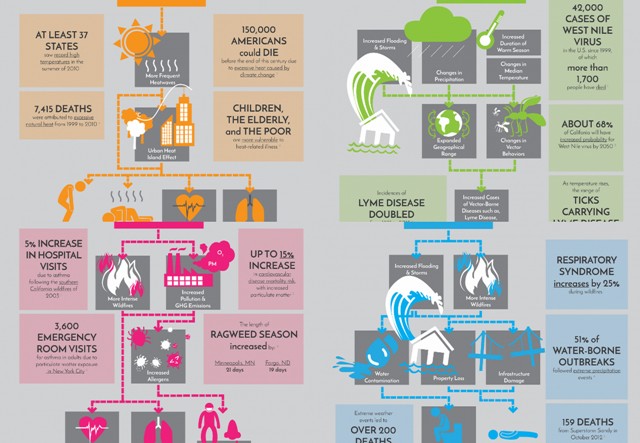 A just released groundbreaking scientific assessment shows how climate change will impact health. US Surgeon General Dr. Vivek Murphy says, “The Changes are happening right now…Climate change is going to impact health, and it’s not a pretty picture.” I’m a Climate Reality leader (Chicago2013). I’m pleased to reproduce this post which is a Climate Reality resource. (Rolly Montpellier~Editor for BoomerWarrior).

This might seem like old news. But the Climate and Health Assessment connects the dots between climate change and its consequences for American public health more clearly than ever before. The new report emphasizes that climate change will continue to exacerbate existing threats to health as well as give rise to new ones.

But like many scientific reports, it can get a little dense. So with some help from our friends at Climate Nexus and the American Public Health Association, here are four key findings illustrated in infographics.

Extreme weather events – like floods, wildfires, and drought – can be terrifying, but what do they have to do with public health? These events can have fatal consequences, but they can also lead to food and waterborne illnesses after the fact. Furthermore, if public infrastructure – like communication systems or emergency response services – is damaged during an extreme event, access to lifesaving care is jeopardized.

The report is also one of the first of its kind to study how climate change impacts mental health, noting that people “exposed to climate weather-related natural disasters experience stress reactions and serious mental health consequences, including symptoms of post-traumatic stress disorder (PTSD), depressions, and general anxiety.”

It’s also important to note that lower-income communities, children, the elderly, and some communities of color [as well as Indigenous groups] are disproportionately affected by extreme weather. Just as Pope Francis has said, “The deterioration of the environment and society affect the most vulnerable people on the planet.”

Greenhouse gas emissions from fossil fuels not only pollute our air directly; they also drive climate change, which can indirectly affect the quality of our air. In 2015, the continental US experienced its second-warmest year on record, with the average temperature 2.4F or 1.5C above the twentieth century average. Things are heating up!

As the climate has become warmer, weather patterns change, contributing to higher levels of air pollution like ground-level ozone that can “cause premature deaths, hospital visits, lost school days, and acute respiratory symptoms.”

And that’s not all. The report also predicts wildfires will flare up more and more often, releasing more and more particles into the air and raising the threat of respiratory and cardiovascular diseases. Plus, warming temperatures and rising levels of carbon pollution are expected to lead to higher levels of the allergens that contribute to asthma and other illnesses.

So, what’s a vector-borne disease? Vector-borne diseases are illnesses spread by insects or arachnids (the vectors) like mosquitoes, fleas, mites, or ticks. And as our climate changes, it’s likely that so too will how far they travel – and how the diseases they carry spread.

For example, the Climate and Health Assessment found that “rising temperatures, changing precipitation patterns, and a higher frequency of some extreme weather events associated with climate change will influence the distribution, abundance, and prevalence” of some vectors like the mosquitos that carry the West Nile virus. In plain terms, they’re expected to range further north and have a longer breeding season. That means a higher probability of Americans contracting this and other illnesses.

As temperatures rise with climate change, scientists expect intense heat waves to happen more frequently, leading to more and more premature deaths. As with other types of extreme weather, increasing heat hits children, the elderly, and low-income communities the hardest through related illnesses including cardiovascular and respiratory diseases as well as diabetes and mental-health issues.

The White House notes that “even small differences from seasonal average temperatures result in illness and death.  An increased risk for respiratory and cardiovascular death is observed in older adults during temperature extremes.”

Climate change poses an immediate and serious threat to human health, not just in the US, but also in Canada and around the world. The focus of the study is the United States but the health impact of climate change and global warming is global.

EPA Administrator Gina McCarthy said it best: “This isn’t just about glaciers and polar bears. It’s about the health of our family and our kids. To protect ourselves and future generations, we need to understand [that climate change will impact health] — health impacts that are already happening, and those that we expect to see down the road.”