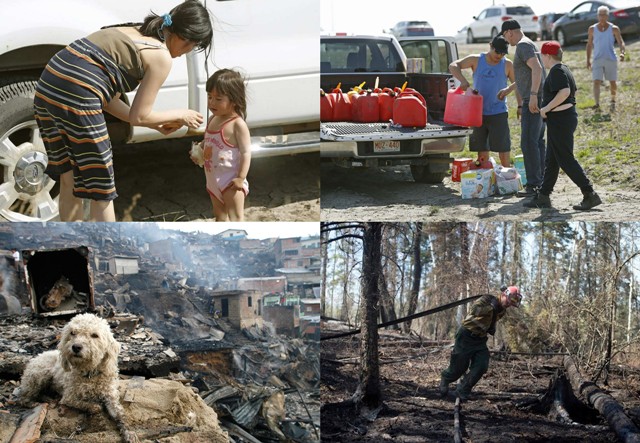 “The human family is in a difficult situation,” says Desmond Berghofer. Desmond is the grandfather of 12 grandchildren, a contributor on BoomerWarrior and a long-distance friend. We have corresponded by email and spoken by phone but regrettably we have never met face-to-face.

Following my recent somewhat controversial article — The Climate Irony is Inescapable in Fort McMurray — Desmond shared his thoughts and observations on the tragedy of this “city built in the boreal forest.”

Human Family in a Difficult Situation

In his email message to me, Desmond uses the term “human family” to describe humanity. As members of a global community, most of us care about the same things — family, food and water, shelter, kindness, love, respect and compassion. The following collage shows residents of Fort McMurray caring for their children and helping one another during the ongoing crisis. A family pet has survived and now waits for help while a fireman continues his work to bring the blaze under control. These scenes can be found anywhere where the “human family” struggles to adapt to extreme weather occurrences.

I have just read your latest newsletter and want to offer a few thoughts about the tragedy of Fort McMurray.

I think climate activists have to be careful in linking what happened in Fort McMurray to climate change and oil production.

Fort McMurray is a city built in the boreal forest.  True, it is there because of Alberta’s decision to exploit the deposits of oil sands in that area, but its burning is more related to the danger of putting human habitation in a forest, irrespective of whether there is any oil around or whether the climate is changing.

In recent years there have been similar instances of destruction of human settlements in forests in Alberta and BC.  It should also be noted that fires have ravaged human settlements in the boreal forest many times over the past century. It is not a new phenomenon, but the scale of the Fort McMurray evacuation is what makes this latest fire memorable.

Forests need to burn on a regular basis, but when people get involved we try to stop the burning and this causes a buildup of fuel so that when a fire inevitably comes, it is going to burn fiercely.  In the Fort McMurray instance the conflagration was intensified by strong winds, and the whole thing overwhelmed whatever systems authorities had in place to cope with such an event.

The fact that this event occurred in May, very early for a fire season, is disturbing and is almost certainly related to a warming trend in northern Canada.  We already have more than 80 fires burning in northern British Columbia.  That is a point worth making, but remembering that people generally feel helpless in the face of such a global change.

Clearly, we are on a trajectory for huge and increasing costs to human economies related to severe weather events.  Alberta is likely to become a test case for much of the developed world.  Its economy is built largely on oil extraction, and so is depressed, as the world tries to cut back on the use of fossil-based energy. But at the same time Alberta is faced with massive costs from extreme weather events.  If we remember Alberta’s contribution to the Canadian economy during the years before we became aware of climate change, we should recognize the need to help Albertans get through the tough times ahead.

This does not mean that we do not continue to argue for a shift to clean energy.  Alberta, too, has a lot to contribute to that change.  However, it seems more important to raise the mantra that everything is connected to everything else and that we are all in this together, and not to draw apocalyptic conclusions or any thought of karma about the burning of a city at the centre of oil sands extraction.

No matter where we live, human beings are going to be struggling far into the future with the consequences of over building on the landscape, because we have made a lot of mistakes out of ignorance of the consequences.  We are going to need massive amounts of empathy and kindness as a global human family.  I think that is the message we should be putting out as forcefully as we can.

The most powerful image out of Fort McMurray is that of the folk on the highway who were bringing jerry cans of gasoline to fleeing families stranded because their cars had run out of fuel.

I think the gist of what I am trying to say is that the human family is in a difficult situation and the most important thing we can do is pull together in the face of the struggle.  The people of Fort McMurray provided a good example of that.  This goes way beyond the climate issue to our overwhelming predisposition to engage in conflictual, wasteful activities, such as the military conflict now going on in the Middle East, and the continuing posturing of national leaders for dominance in trade and the development of armaments.

This is not a time for blame. It is time to stand together and make sure the people are safe and well cared for… Eventually the rebuilding will begin. That includes rebuilding Fort McMurray and ensuring we take the necessary steps to prevent this from happening to any other communities. We need to figure out how can we adapt our communities to deal with the risk of fires and we need to take action to reduce the risk of climate change. This is part of the rebuilding process and this is the responsibility of all Canadians. (Source: Executive Directors at Environmental Groups).