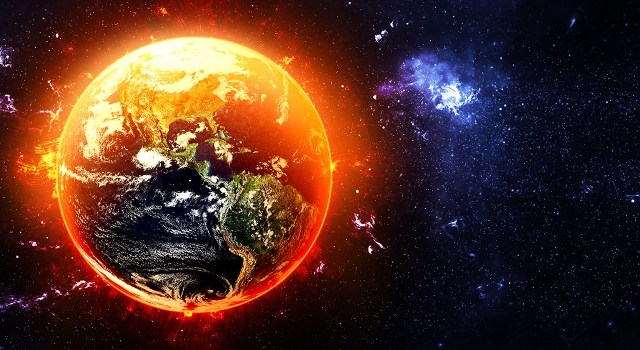 Climate alarm bells should be going off in every country, every city, every household. We are losing ground as we struggle to fight climate change and global warming. The climate action trends witnessed in 2016 are both unsettling and ominous.

Without heroic — but improbable — efforts, the 2 °C world is but magical thinking.

But the real climate alarm bells are even more unsettling, more foreboding, more frightening than any one single climate-related disaster can ever be. New research suggests that the Earth’s climate could be more sensitive to greenhouse gases than thought. Some scientists now believe that it could be “game over” for planet earth as we know it.

The Gap Is Growing

The UN Environment Program warns that the world is nowhere near on track to achieve the ambitious temperature goals promised in the Paris Agreement. The operative target is 2 degrees of warming considered to be the threshold to avoid catastrophic climate change. The challenge is enormous because global temperatures have already gone up by almost 1 degree Celsius.

Bridging the gap will be an impossibility based on the casual response of the world community since the signing of the Paris Agreement. In spite of all the apparent progress happening around the globe, the gap between what needs to happen and what is happening is actually growing. Under the Paris INDC (Intended Nationally Determined Contributions) framework, emissions will keep increasing sharply through at least 2030. And even if fully implemented, the INDCs are only consistent with staying below a temperature increase of 3.2C. The UN Environment Program points out that much more needs to be done:

The UN Environment Program said the world needs to slash its annual greenhouse gas emissions by an additional 12-14 billion metric tons by 2030 to have a chance of limiting global warming to 2 degrees Celsius….the temperature goal that countries agreed to in the Paris pact.

The False Promise of the Paris Agreement

In a recent Guardian article, George Monbiot identified the Paris Agreement as one of 13 impossible crises that humanity now faces. According to Monbiot, “national change programs bear no connection to the commitments made at Paris. Even if these programmes are fully implemented (they won’t be), they set us on a climate-change trajectory way beyond that envisaged by the agreement.” Canada’s national climate framework is a case in point. Yes it’s historic but it’s also flawed and insufficient. Canada and other governments around the world keep making promises they cannot keep.

The statistics on global warming tell the story of a climate emergency. The World Meteorological Organisation (WMO) claims that 2016 will be the hottest year ever recorded, setting a new high for the third consecutive year. WMO figures show a global temperature of 1.2C warmer than the late 19th century. And 16 out the 17 hottest years are in this century.

According to director Gavin Schmidt of NASA’s Goddard Institute for Space Studies, “the current trend is unprecedented in 1,000 years…the accelerating rate of warming is a chronic problem for society for the next 100 years.” And nowhere is this unparalleled warming more noticeable than in the Arctic.

The astonishing pace of change in the Arctic is puzzling to researchers and climate scientists alike. NOAA’s Arctic Report Card shows that the Arctic continues to warm at twice the rate of the planet as a whole with some parts reaching a stunning 8C above average. The Arctic has now warmed by 3.5C since 1900 and is now 2C above the 1981-2010 average.

Added to the runaway warming is the unprecedented decline in sea ice — both a delay in fall freeze-up and a thinning of ice levels. Sea ice levels have dropped to the lowest levels ever recorded indicating the warmest Arctic weather in tens of thousands of years.

By the end of 2016, the annual rate of increase in CO2 levels will reach a new record of 3.2 to 3.55ppm. This rate of growth will surpass the record rate of atmospheric CO2 increase of 3.05ppm for 2015. This emerging trend is troublesome when compared to the eighties and nineties which saw increases of 1.5ppm annually on average. Carbon dioxide levels in the atmosphere are at their highest in the last 650,000 years, now sitting at 404.93ppm according to NASA.

Trump’s election as President sounds the loudest climate alarm yet. Climate scientists, environmentalists and activists are close to hitting the panic button.

Trump has called climate change a Chinese hoax but later accepted that it could be real. “I’m still open-minded. Nobody really knows,” says Trump. But his actions speak louder than words.

After giving lip service to climate change by meeting with Al Gore and Leonardo DiCaprio, Trump then proceeded to name three staunch climate deniers to key positions, leaving little doubt about climate policy during his term of office. It should be crystal clear that Trump will take a wrecking ball to Obama’s climate legacy.

Trump cannot stop the clean energy revolution now made irreversible because of breakthroughs in energy storage, electric vehicles, global market trends, etc. But he can and will certainly slow down the global drive to reduce emissions and implement climate policy to stop global warming.

“He could slow it enough to destroy the modest chance we have to keep total warming ‘well below 2°C’ as the world committed to in Paris,” says Joe Romm in ThinkProgress. Trump is visibly not the kind of leader the world needs at this crucial time in human history.

But while the world needs the climate change equivalent of Winston Churchill, we just elected Neville Chamberlain. And that may well be exactly how future generations will remember him if he leaves behind a world of ever-worsening climate impacts. (Joe Romm)