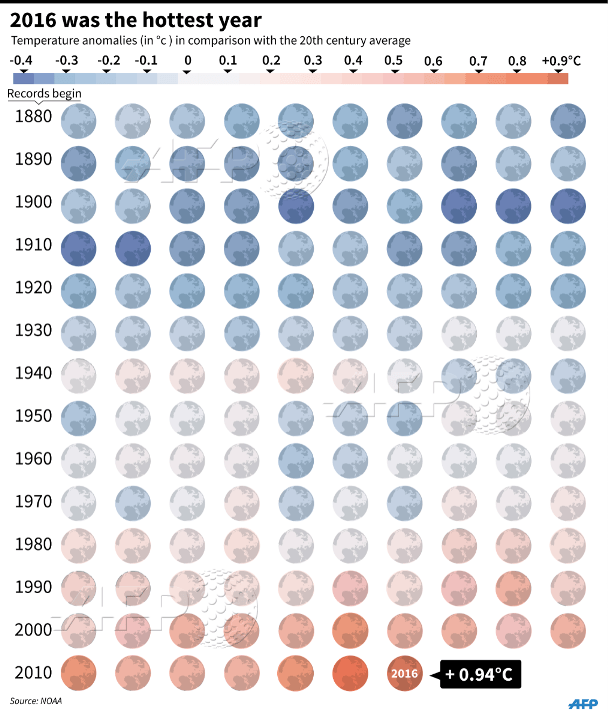 Writing in theguardian, George Monbiot begins his January 19th article with the phrase “make America wait again”. While he’s actually referring to Donald Trump’s energy policy, the phrase easily applies to climate policy as well. Energy and climate are inextricably interwoven. The burning of fossil fuels is the major cause of spiraling carbon emissions which are causing the accelerated pace of planetary warming and of course climate change.

Trump has assembled a team of “fossil fuel men” who are staunch climate deniers. His appointments — Secretary of State, the Environmental Protection Agency (EPA), Energy Secretary and Interior Secretary — are people who have spent their entire career as champions of the fossil fuel industry while simultaneously challenging measures designed to deal with climate change. Monbiot calls Trump “the president that corporate luddites have dreamed of:”

the man who will let them squeeze every last cent from their oil and coal reserves before they become worthless. They need him because science, technology and people’s demands for a safe and stable world have left them stranded. There is no fair fight that they can win, so their last hope lies with a government that will rig the competition.

But Climate Change Will Not Wait

We’re no longer fighting against climate change. It’s beyond that. We are now in the struggle of our lives battling to stop a runaway climate catastrophe.

In January, NASA, NOAA, the World Meteorological Organisation and the MET Office announced that 2016 was the hottest year ever recorded underlining the real and present danger posed by man-made climate change to prosperity and security. Top scientists from around the world have reminded leaders that last year’s extreme weather, sea-level rise and coral bleaching caused major disruption and that the economic damages incurred by global warming have already reached into the billions of dollars.

Global warming is relentless, unmoved by fake news, alternative facts and climate mistruths. The Earth has not been this warm in over 115,000 years. Just as Trump has taken office, freak heatwaves have hit South Africa, Thailand, Kuwait and India, while warming oceans caused massive coral bleaching of the Great Barrier reef. In the US, the cost of the 15 most destructive extreme weather events of 2016 totaled $46 billion and caused 138 deaths.

Progress on fighting climate change has been snail-like and painfully slow but the signing of the Paris Agreement in 2015 was a positive sign that the world is finally beginning to face the grim reality of global warming.

There was hope before Trump. US climate advocates were celebrating small but important victories: new carbon regulations of power plants, the defeat of Keystone XL and a halt to Atlantic drilling. But with one election, the climate movement may be back to the proverbial drawing board.

“I think that the very bad news is that it comes at just the wrong moment,” said Bill McKibben, founder of the climate activist group 350.org. “There was finally a little bit of momentum underway on clean energy, fossil fuel infrastructure, and so on, and that’s going to stop for a while. There’ll be more than a pothole. More like a ditch in the road.”

There’s a misconception that the world has started to address climate change but this is just an illusion. Recent information indicates that the globe is perilously close to reaching the aspirational upper limit of 1.5C of warming set in the Paris Agreement in December 2015. In fact, scientists are warning that at the current pace of climate actions undertaken by world leaders, we are in danger of falling far short of the 2030 emissions-reduction targets agreed to.

This misapprehension is based on the Paris climate deal where governments clapped themselves on the back but when you look at the science it doesn’t compute, it’s not true…Even with optimistic assumptions (future emissions reduction) will cost hundreds of trillions of dollars. It’s potentially putting young people in charge of a situation that is beyond their control. It’s not clear they will be able to take such actions. (Source: James Hanson, Young People’s Burden: Requirement of Negative CO2 Emissions)

“The later it gets, the more we have to distract ourselves from the fact, that soon it will be too late.” (Source: Helmut Seethaler, 1200 Wein)