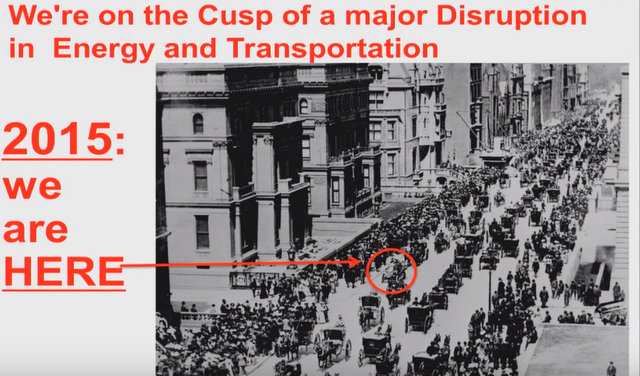 The largest boost to our ability to confront climate change will come from the clean disruption of energy and transportation. So says Tony Seba. That is because when technological disruption occurs, the economic and technical advantages of the disruptive technology are so compelling that the rate of adoption becomes exponential.

Tony Seba, who teaches at Stanford University, is a guru of the clean disruption phenomenon. From his many years as an entrepreneur in Silicon Valley, he developed his understanding of technological change.

Below is a synopsis of his key ideas from his recent lectures (available on YouTube) which grew out of ideas in his 2014 book Clean Disruption.

He predicted the solar energy explosion when prices for solar were 10 times higher than they are today. His latest predictions are equally bold. Seba believes that electric vehicles (EVs) will transform the transportation industry and create huge problems for the oil industry by 2030.

“Disruptions are not new. Disruptions have been happening for hundreds of years,” says Tony Seba. “The last major disruption of transportation happened very quickly. New York City basically went from all horse to all car in 13 years”. Disruptions bring exponential change as well as unexpected opportunities.

Two recent examples of technological disruptions and the associated exponential changes that occur are the digital camera and the smart phone.  In the year 2002 Kodak had sales of 14 billion and a profit of 1.4 billion. Ten years later it applied for bankruptcy protection. It had failed to anticipate the disruption the digital camera would cause.  The Smart phone was a $700 novelty item when introduced by Apple in 2007 — a decade later, essentially everyone owns one

In spite of the frequency of disruptions, why then do we consistently fail to anticipate their magnitude and their socio-economic, political and market impacts? “Our brain is not built to think exponentially,” says Seba. “This is an acquired skill.” The linear-thinking human fails to anticipate — does not see a disruption coming.

But computing power in itself does not drive disruptions. There needs to be a convergence of several technologies for a full disruption to erupt. In his work on clean disruption, Seba focuses on a framework of 4 key technologies which are working together to reshape energy and transportation over a very short period of a few years. These are: Energy Storage, Electric Vehicles, Self-driving Cars and Solar. Each of these is disruptive individually but in convergence, he argues, these will disrupt energy and transportation in remarkable ways. 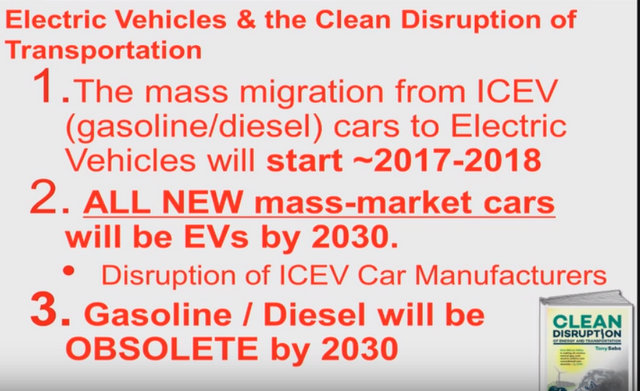 Led by Tesla, dozens of companies are getting into the Lithium battery market, dramatically driving down the cost for energy storage by 16 percent per year. Additionally, storage technology is improving by 5 percent per year. And both of these trends are expected to continue well into the future.

Using the Tesla model as an example, Seba arugues that the electric vehicle will be hugely disruptive for several reasons. The internal combustion vehicle is only 17-21 percent efficient in converting fuel to power — the rest of the energy is released as heat. By comparison, the electric drivetrain is 90-95 percent efficient — 5 times greater efficiency. Furthermore, today’s basic car has 2,000 moving parts; the Tesla has 18, one percent of the modern automobile, resulting in substantially lower maintenance costs

Tony Seba projects that by 2020, the auto industry will produce EVs with a 320 kilometre driving range for around $30,000 US (unsubsidized) – a price point comparable to the median conventional automobile. So in only a few years, the EV will be cheaper to buy than the average American vehicle and five to ten times cheaper to operate and maintain. He predicts that by 2030 every new mass-produced vehicle will be electric.

Self-driving is being made possible by the development of low-cost laser vehicle technology called LiDAR. LiDAR sensing technology, involving a robust suite of automotive detection and ranging sensors, will be the central element of autonomous driving as automobiles evolve from active safety to full autonomous self-driving. Seba says this is becoming a reality because of two factors: a dramatic cost curve drop of LiDAR technology and the increase in supercomputer power.

This is A Disruption Waiting to Happen (Tony Seba)

In addition to LiDARs and highly efficient teraflop computing power, we can expect to see the strong emergence of car-sharing and car-pooling claims Seba. This will lead to 15 times fewer cars in circulation. Uber books about $10 billion dollars per year and has introduced car pooling to its fleet of vehicles. It will also be producing its own electric vehicles in the not too distant future. The company is now valued higher than many automotive companies.

Seba tells us to watch for car ownership to go away. The travel cost per kilometre will drop ten times (from $1 per mile to 0.10 cents) by not owning a car. We will need 80 percent fewer cars which means fewer roads, parking lots, auto dealers, repair services. By 2030, every car will be electric, self-driving and shared, costing 10 times less to own on per kilometre basis.

According to Seba, since the 1970s, conventional energy sources — oil, gas, coal and nuclear — have gone up in cost by 6 to 16 times. During that same period, solar has come down by a factor of 200. Solar has improved around 1300-3000 times on a per unit cost basis relative to conventional energy. And another 50% drop is expected by 2020. Seba suggests that what he calls “God Parity” will occur by 2022 – that’s when unsubsidized roof solar falls below the cost of just the transmission component of power from the grid.

In conclusion, Seba argues we’re on the cusp of a major disruption in energy and transportation, the two giants of the industrial age. The transition to a new technological platform will be quick. The four key technologies are all improving exponentially and we’re just on the edge of the next major disruption. This disruption is happening right now.

Right now, a cold breeze is beginning to blow through many boardrooms around the world. Political pressure to do the right thing for the environment may have only limited success, but economics could destroy both the automotive and fossil fuel industries in a relatively short period of time. (Cleantechnica, Steve Harvey)

Watching a Tony Seba video is both inspirational and a source of optimism — highly recommended for anyone concerned about climate change.