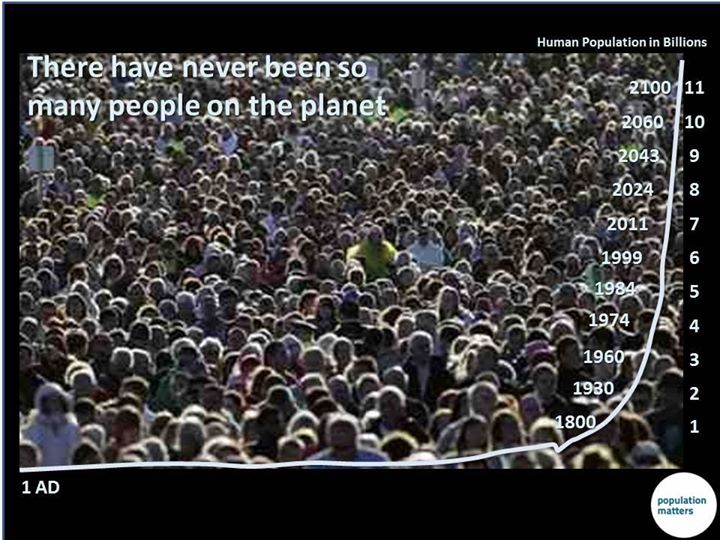 The problems of overpopulation, overdevelopment and overshoot continue to be largely ignored by the climate movement. As a ‘book champion’, ‘campaign activist’ and ‘campaign friend’ of the Global Population Speakout network,  I’m pleased to share the following excerpts from the afterword of the book (written by Eileen Crist) showing that a world with ten billion people will not end well. (Rolly Montpellier, Editor for Below2°C)

One of the commonplaces of environmental writing these days is a population forecast of 10 billion (or more) people by century’s end.

Environmental analysts have divergent responses to this particular figure (which is the latest United Nations estimate). Some are incredulous that such a number can be approached—let alone sustained—and contend that the consequences of moving in that direction will be disastrous. But other environmental observers, describing themselves as more optimistic, are endeavoring to figure out strategies that might sustain the expected billions.

Thus where some see disaster on the immediate horizon, others submit that with another techno-managerial turn of the screw humanity might avert grim penalties to population growth. Yet despite considerable divergence in outlook, all environmental analysts agree that (even as our global numbers continue to climb) we face grueling challenges, each immense in its own right but dizzying in their unpredictable synergies: biodiversity destruction, climate change, freshwater depletion, ceilings on agricultural productivity, all manner of pollution, topsoil loss, and ocean acidification to mention some prominent examples.

The point to focus on instead is that a world of so many billions does not, in any case, turn out well: Because such a world is only possible by taking a spellbindingly life-abundant planet and turning it into a human food plantation, gridded with industrial infrastructures, webbed densely by networks of high-traffic global trade and travel, in which remnants of natural areas—simulacra or residues of wilderness—are zoned for ecological services and ecotourism.

What’s more, a sustainable geopolitical status quo of [ten] 10 billion consumers will require comprehensive mega-technological support: offshore dike projects; more dams (already, according to a 2009 Yale Environment 360 report, being constructed at “a furious pace”); desalinization plant construction with accompanying transport infrastructures; scaling-up of industrial aquaculture; genetic modification of crops and animals to adapt to climatic and consumer demands; cultivating so-called marginal lands to grow grasses and other plants for biofuels; the spread of the fracking scourge (globalizing “the oil and shale-gas boom”); climate engineering at global and regional scales; and the spread and normalization of factory farms.

In such a world corporations are likely to continue reigning supreme, for the coming technological gigantism (not to mention the escalation of mass consumption) will make them indispensable. Corporate expertise and products will be required to keep the biosphere on permanent “dialysis,” to borrow a fitting metaphor from James Lovelock.

In such a world—whatever it augurs for humanity, which seems bleak to say the least—the exuberance of Life will suffer a tremendous blow. This Life is barely hanging on in the present world; it will not survive a world that is a magnified version of the one we live in.

In the meantime, even as the available option of limitations is bypassed as ostensibly unrealistic, the prevailing question voiced with increasingly shrill urgency is: Can the Earth feed 10 billion people? By most expert accounts, because of population growth along with the rise of meat and animal product consumption, food production will have to double by 2050 to meet demand—and the big question is: Can it be done?

Despite all these things happening already today (in a global economy of 7.3 billion), those at work to figure out if food production can be doubled and eventually tripled (to serve a world of 9, 10, or more billion in an intensified global economy) always add that it must be done without additional ecological damage.

Those endeavoring to figure out how to increase food production without more harms to nature may well be sincere; but they appear to be in the throes of wishful thinking.

Hands down, however, food production is the most ecologically devastating enterprise on Earth. Yet mainstream discourses do not tend to flag the food system’s earth-shattering demands on the biosphere. Instead, the current ability to produce ample amounts of food appears to merit a different cluster of conclusions: that humanity’s food-producing capacity is not constrained by natural limits; that we may be able to stretch that productivity even further via managerial and technological innovations; and that Homo sapiens is unlike all other species, who are checked by nature whenever their numbers exceed the capacity of the environment to sustain them. Indeed, the belief that humans are exempt from any natural “carrying capacity” is a cornerstone of the mission to continue expanding food production to support the coming billions.

The demographic idea of carrying capacity refers to the maximal population of a species that its environment can support, without that environment becoming too degraded to support the species in the future. If a species, for some reason or other, does exceed its carrying capacity—with numbers mounting beyond what the natural setting can sustain—the consequences are implacable: starvation, disease, and death follow, until the population is brought back within a supportable range. While this natural law of the relationship between population size and sustenance appears broadly applicable in the animal kingdom, here’s the key point regarding human exemption: It is widely believed that history has shown that it does not apply to us.

The question of whether ultimately there are (or not) natural limits to our food-producing ability, which will (or not) check human demographic growth, is not so interesting; the experiment required for the final verdict is an ugly one either way. Instead, I along with other deep ecologists invite consideration of something far more enticing: that by choosing the wisdom of limitations and humility, humanity can reject life on a planet converted into a human food factory and allow for the rewilding of vast expanses of the biosphere’s landscapes and seascapes.

Cropland uses a portion of the planet the size of South America, while land for grazing farm animals eats up an even larger share—an area the size of Africa.  Regarding the seas, the human food factory has demanded that 98 percent of them be fishable.  As a consequence, only about 10 percent of the big fish are left and there is no end in sight to the demand on everything from krill to sharks.

Furthermore, food production contributes at least 30 percent of anthropogenic greenhouse gases; the latter are driving a climate change episode that—barring the energy transition everyone is still waiting for—could egg the planet to an average temperature increase in the ballpark of the Paleocene-Eocene Thermal Maximum.

The food factory—the one often touted as a miracle of ingenuity bestowing the badge of exemptionalism on Homo sapiens—consumes at least 70 percent of the freshwater taken from ecological watersheds, thus depriving the nonhumans who called that water home, and killing or driving them to extinction (in many cases even before we could meet them). Food production drives soil erosion and desertification, giving rise to ocean-spanning dust storms. It also depends on constant applications of pesticides, herbicides, and other biocides.

I have digressed into the ecological discontents of humanity’s current food production in order to submit the following: that the social mission to double or triple it is madness. But the proposal to move deliberately in the direction of more than halving our global population, and simultaneously radically changing our food system, is not.

If women (and their partners) today were voluntarily to choose having an average of one child (meaning many would choose none, many one, and others no more than two), then the world’s population—instead of climbing toward 10 billion—would stabilize and then begin descending toward 2.

One of the most effective and tangible ways to address climate disruption, as well as to curb the excessive consumption of everything (including food), is to move toward the substantial reduction of the number of consumers worldwide, meaning both the populations of the developed world and of “emerging economies” in Asia, Southeast Asia, and Latin America.

The combination of heightened public awareness, the empowerment of women, and the availability and affordability of up-to-date reproductive information and services yields swift declines in birthrates.

The following measures are recommended by Eileen Crist to reduce current birthrates:

You can read the full article by Eileen Crist in Overdevelopment, Overpopulation, Overshoot.