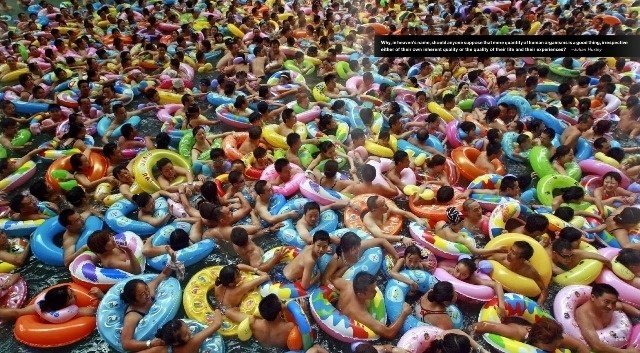 The problems of overpopulation, overdevelopment and overshoot continue to be largely ignored in discussions about global climate action.  As a ‘book champion’, ‘campaign activist’ and ‘campaign friend’ of the Global Population Speakout network,  I’m pleased to share the following excerpts and resources showing that we are literally standing shoulder to shoulder in many areas of our world. (Rolly Montpellier ~ Managing Editor, BoomerWarrior).

In the last 200 years the population has grown exponentially, at a rate of 1.9 percent per year. If it continued at this rate, with the population doubling every 40 years, by 2600 we would all be standing shoulder to shoulder. –Stephen Hawking

Can you think of any problem in any area of human endeavor on any scale, from microscopic to global, whose long-term solution is in any demonstrable way aided, assisted, or advanced by further increases in population, locally, nationally, or globally. —Albert Bartlett

(Excerpts from the Introduction of Overdevelopment, Overpopulation, Overshoot, by William Ryerson)

Most conversations about population begin with statistics—demographic data, fertility rates…the latest reports on malnutrition, deforestation, biodiversity loss, climate change, and so on. Such data, while useful, fails to generate mass concern about the fundamental issue affecting the future of the Earth.

In reality, every discussion about population involves people, the world that our children and grandchildren will live to see and the health of the planet that supports life.

The population debate is not about the maximum number of people that could be packed onto the planet. The crucial question is how many people can the Earth sustain, at a reasonable standard of living, while leaving room for the diversity of life to flourish? There is no precise answer to this question, but the facts overwhelmingly support one conclusion: We cannot go on the way we are going. We are already doing severe and irreparable harm to the planet. Something has to give.

If we cannot live sustainably with 7.2 billion people, how are we going to support billions more by the end of this century? The United Nations’ latest “multi-variant” projection indicates that we could have 10,9 billion people by 2100, but that may be an underestimation.  In 2014 the global fertility rate—the number of children born to each woman during her lifetime—was 2.5. If this rate were to remain unchanged, demographers suggest that we could have 27 billion people on the planet by the end of the century. Given our limited inheritance of soil, water and arable land, sustaining a global population that size is not even remotely possible.

The Global Footprint Network estimates that humans already use 150 percent of the Earth’s renewable capacity annually…that by 2030 we will need “two planets” to sustain us. Further growth simply deepens the crisis of ecological “overshoot” as we draw down Earth’s carrying capacity, and it comes at the direct expense of our own children and grandchildren.

Because of population growth and changing diets, the world’s demand for food is expected to rise by 70-100 percent over the next forty years. Water scarcity in many parts of the world has already reached crisis proportions. Demand for water is expected to outstrip supply by 40 percent within the next twenty years. By 2030, an estimated 3.9 billion people, nearly half of the world’s population, will be living in areas of high water stress.

In his review of Overdevelopment, Overpopulation, Overshoot, Alan Weisman writes “that the reasons why we became so many seemed at first like such an obviously good idea:”

The universal cultural imperative to be fruitful and multiply protected our ancestors from being usurped by more powerful competitors. Medical advances that, beginning in the 19th century, dramatically lowered infant mortality and nearly doubled average human life expectancy – who could object to those?

But by far the most powerful detonator of Homo sapiens’ volcanic explosion was our 20th-century discovery of how to grow more food on this planet than nature ever could.

At the present rate of a million more of us every 4¼ days, we’ll hit 11 billion by the end of this century, which is probably impossible. For one, it means that in just the next 50 years we’d need to produce more food than has been consumed in humanity’s entire history. Unfortunately, for every 1º C. increase in average global temperature, grain yields are expected to drop 10%. And, since we’re currently on track for a 4º C. increase by 2100, rising seas will swamp our most fertile lands – river deltas – and everywhere else that agriculture occurs near sea level (such as for much of the world’s most important foodstuff, rice).

Viewed from almost any angle, addressing population is a win-win proposition. Given the central role that population dynamics will play in determining the welfare of future generations, what the world needs today is a wake-up call. Time, however, is beginning to run out.

The size of population now, with the scale of the problems it creates, leads to an increasingly chaotic situation. More population exacerbates any efforts to solve humanity’s problems, anywhere, be they immediate or long term. –Walter Youngquist