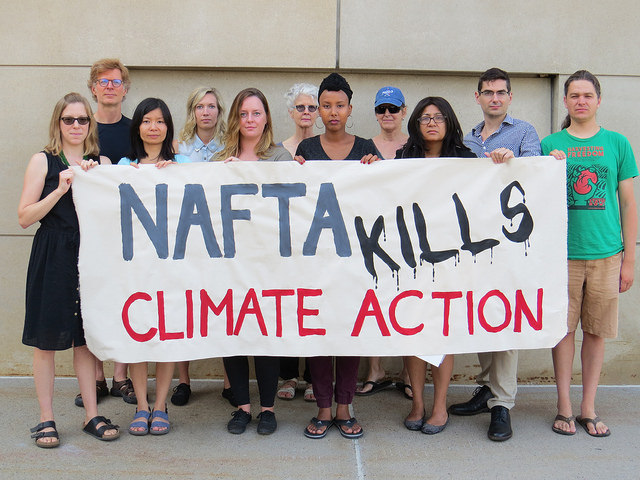 Andrea Harden-Donahue is the Energy and Climate Justice campaigner for The Council of Canadians. She’s also a blogger for the Council. In her recent article centering on climate activism and trade agreements, (reproduced in Below2C with permission) she lists 5 reasons why climate activists need to join the fight for trade justice. (Rolly Montpellier, Editor for Below2°C).

With NAFTA negotiations [well on their way], my mind is on the interconnections between climate, social and trade justice.

Here are 5 reasons why we need to build relationships between climate, social and trade justice movements:

NAFTA’s Investor-State Dispute Settlement (ISDS) has allowed corporations to sue the government of another country if it introduces new laws, regulations or practices that impact their investments. Canada has faced 38 NAFTA Chapter 11 suits, two-thirds of them over environmental protection laws. This includes a moratorium on fracking in Quebec (ongoing dispute) and Nova Scotia’s denial of a dangerous quarry mine. Canada currently faces suits where corporations are seeking over $6 billion in damages. Chapter 11 has also been used to undermine labour and human rights.

NAFTA’s energy chapter deregulated Canada’s energy sector leading to a free-for-all corporate rush to own resources. It has locked Canada in as a major exporter of primarily raw, unrefined resources. The chapter, written before broad awareness on climate change, limits our capacity to influence our energy production and consumption. The proportional sharing clause requires Canada to export a locked-in percentage of energy production to the U.S. This again limits government ability to restrict the production of climate polluting fossil fuels. The corporate free for all combined with a limiting of regulatory options has had cascading human and Indigenous rights impacts in limiting our ability to directly regulate sectors such as Canada’s tar sands. Other NAFTA rules also undermine climate solutions such as low carbon fuel standards and renewable portfolio standards. NAFTA’s procurement rules can limit the ability of public policy to ensure government contracts support renewable energy, energy efficiency and sustainable goods.

Soon after NAFTA was signed, the Canadian government adopted a policy whereby all new laws and any changes to existing laws have to be vetted by trade experts to ensure they could not be challenged under ISDS rules. So how many good public policies have we lost due to threats of a chapter 11 suit? Hard to know, but I bet existing cases are the tip of the iceberg.

4. We can’t rely on the Liberal government to protect labour, social and environmental rights

While Trudeau’s speeches for a so-called progressive NAFTA sound good, the Liberals’ actions suggest we should expect more of the same. Rather than support the removal of chapter 11, media reports suggest the Canadian government says it is not negotiable, arguing instead for changing the chapter to reflect the CETA ISDS system. As Maude Barlow recently stated, “Modeling NAFTA 2.0 on CETA’s ISDS system wouldn’t change much: All the egregious suits that Canada has faced would continue,” says Barlow. “It would still be a system built on the primacy of investors’ rights over our democracies.” Council of Canadians Trade Campaigner Sujata Dey adds, “You cannot protect climate and labour rights, and still give corporations this powerful right to undermine public legislation. Trudeau’s negotiating position makes it clearer than ever that his government’s claims that it wants a ‘progressive’ NAFTA with ‘environment’ and ‘labour’ standards is nothing more than pretty words.

Then there is Canada’s new NAFTA advisory council on the environment. While this certainly sounds like a good idea, there are actually no labour or environmental organizations participating in it. Instead it is dominated by corporate and pro-business interests. NUPGE (National Union of Public and General Employees) has a useful breakdown of the committee here.

The global trade regime is a vehicle protecting the same drive for unrestrained profit that undermines labour laws, violates Indigenous and human rights, threatens frontline communities, widens the gap between rich and poor and drives climate change. If we want to enact the type of change we need to see, change that will lead to healthy, safe communities and a stabilized environment, we need to break out of our organizing silos and embrace these connections in our collective work. The NAFTA talks happening in Ottawa are an occasion to do just this, and so are the climate talks in Bonn this December.

This post was first published on Andrea Harden-Donahue’s blog for Council of Canadians.