We are pleased to welcome Kirsten Stade as a contributor to Below2C. She is an environmental activist, writer and organizer for a US-based nonprofit. In this first article, Kirsten makes the assertion that population control is one of the low-hanging fruits of climate solutions. (Below2C Editor).

Scientists, and non-scientists who listen to them, have known for some time that life on this planet is in imminent jeopardy due to climate change. Recently, however, like the steadily spreading thaw of the Arctic permafrost, that awareness has begun to creep into the mainstream. 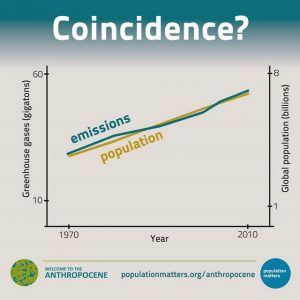 Now there is some acknowledgement that we have but ­­­a scant few years to dramatically reduce our emissions before large parts of our planet become uninhabitable to humans and to all but the most resilient of species, before changes are set in motion that put Bangladesh underwater in the next century, that make it impossible to grow grain in regions currently responsible for most of our food, that transform the air over most of our cities into an unbreathable toxic miasma.

The Most Potent Climate Solution

In the face of this reality, one might hope to see a lively discussion in informed circles of any and all possible avenues to escape the fate of certain discomfort and likely disaster that awaits us and most other life on this planet. If a solution were to emerge that offered 24 times the emissions reduction of living completely without a car, and hundreds of times the carbon-reducing power of oft-touted individual actions like replacing lightbulbs and recycling, one would expect enthusiastic embrace of that approach by anyone who does not wish to die of heat exhaustion in Maine, or a previously unknown mosquito-borne illness in New Jersey [and regions further north in Canada].

Instead, news that the emissions reductions from having one less child dwarf those from any other measure a climate-conscious person can take is met with deafening silence. In fact, the title of the letter in which Seth Wynes and Kimberly A. Nicholas, of Sweden’s Lund University, revealed their findings, says it all: The climate mitigation gap: education and government recommendations miss the most effective individual actions. Of those actions, the researchers find, having one less child is by far the most potent―resulting in 58.6 fewer tons of carbon emissions per person. The next most powerful action, living entirely car-free, offers a fraction of that potential, with carbon reductions of 2.4 tons per year for each person making that change. (Image Source: Overdevelopment, Overpopulation, Overshoot)

Why are educational and governmental institutions with the power to sway opinion and action avoiding the opportunity to inspire actions that might make a real difference?

To start with, any talk of constraining human population growth remains an intense trigger to audiences across the political spectrum. To some on the far right, such talk is tantamount to suggesting the elimination of the white race. The authors, after all, were focusing on the climate impacts of predominantly white, western populations having one fewer child; the higher fertility rates throughout much of the developing world are not discussed as these populations produce a fraction of the carbon emissions of those living in the west.

More perplexingly, the article also triggered backlash on the left. In some circles, any talk of addressing population growth–even when it explicitly targets the fertility levels of wealthy westerners who consume the most resources—raises the uncomfortable specter of racially-motivated efforts to control the fertility of marginalized groups. Among some on social media, the study evoked accusations of racism and misogyny.

Such responses may not be justified based on the content of the study in question, but they are understandable given the ghastly history of eugenics in the United States and around the world. And it is also true that in addition to eugenics-driven forced sterilization programs, the best-known examples of state-directed fertility policy are those of coercive sterilization in India and the one-child policy in China, neither of which is a model we want to repeat.

But surely it is time to move beyond kneejerk shutdowns of any and all discussions of modulating our fertility in the face of unprecedented changes to the conditions that support life on this planet. And the complete mainstream blackout of the carbon impact of personal fertility choices should be scrutinized, and challenged.

At this point, what should be readily apparent is that a vast realm of educational and policy approaches to reducing fertility exists between the extremes of total blackout, and coercion. In fact, Travis Rieder of the Berman Institute of Bioethics at Johns Hopkins and his colleagues have outlined a number of such approaches. These run the gamut from educational and purely incentive-based programs such as widespread media campaigns and expanding access to family planning, which he advocates for populations of developing countries which bear minimal responsibility for the climate crisis, to changing the tax code so that it penalizes, rather than incentivizes, procreation—an approach he suggests only for the wealthy whose emissions are greatest.

Certainly there are significant cultural and political challenges to be overcome to pave the way for“population engineering” measures like those identified by Rieder et al. Yet these challenges are less daunting than the prospect of reducing our emissions adequately through technology and energy efficiency alone, and considerably more palatable than the environmental meltdown that awaits us if we shy away from adequate action.

In addition, voluntary, progressive policy approaches to reducing our fertility have numerous humanitarian benefits in addition to their salutary effects on climate. After all, what could be more fundamental to the rights of women, and of impoverished people in developing nations, than expanding awareness and access to contraception among the 225 million women worldwide who currently have an unmet need – that is, are having children they do not want?

Related Articles:
A WORLD OF TEN BILLION
STANDING SHOULDER TO SHOULDER
ONE HUMAN RACE LIVING ON ONE PLANET