Stephen Leahy is a regular contributor to Below2°C. In this article he exposes the staggering costs of a warming planet. Climate change is happening right now, impacting our daily lives and our national economies. Yet, in spite of the crystal clear evidence before us, we lack the sense of urgency needed to address the looming crisis. (Below2°C Editors).

This article was first published in National Geographic.

There are risks and costs to action. But they are far less than the long range costs of comfortable inaction. – John F. Kennedy

The Staggering Costs Of Climate Change

A new report warns of a high price tag on the impacts of global warming, from storm damage to health costs. But solutions can provide better value, the authors say.

Extreme weather, made worse by climate change, along with the health impacts of burning fossil fuels, has cost the U.S. economy at least $240 billion a year over the past ten years.

And yet this does not include this past month’s three major hurricanes or 76 wildfires in nine Western states. Those economic losses alone are estimated to top $300 billion, the report notes. Putting it in perspective, $300 billion is enough money to provide free tuition for the 13.5 million U.S. students enrolled in public colleges and universities for four years.

In the coming decade, economic losses from extreme weather combined with the health costs of air pollution spiral upward to at least $360 billion annually, potentially crippling U.S. economic growth, according to this new report, The Economic Case for Climate Action in the United States, published online Thursday by the Universal Ecological Fund. 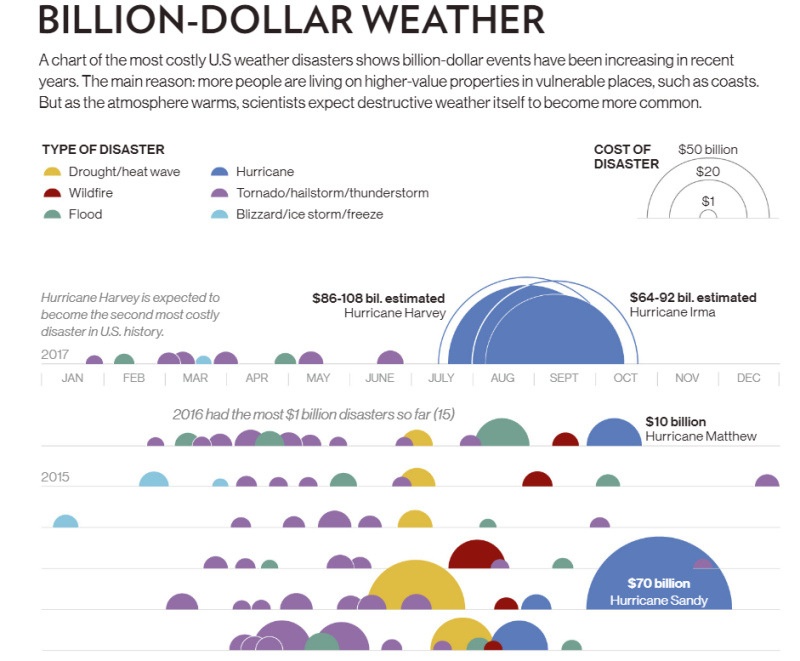 And much more global warming is coming—3.6 degrees F (2 degrees C) temperature by 2050 and even greater warming beyond that—unless bigger cuts in fossil-fuel emissions are made than those promised in the 2015 Paris Climate Agreement, said Watson. “The impacts of climate change are certainly going to get more than twice as bad,” he said. “We want to paint a picture for Americans to illustrate the fact that the costs of not acting on climate change are very significant,” Watson, the former chair of the Intergovernmental Panel on Climate Change, told National Geographic.

Watson is quick to point out that extreme weather events, including heat waves, hurricanes, wildfires, and droughts, are not caused by climate change. However, there is no question their intensity and frequency in many cases has been made worse by the fact the entire planet is now 1.8 degrees F (1 degree C) hotter, he said in an interview.

While a 1.8 degree F (1 degree C) increase may seem small, it’s having a major economic impact on the U.S. According to data provided by the National Oceanic and Atmospheric Administration (NOAA), the number of extreme weather events causing at least $1 billion in economic losses has increased more than 400 percent since the 1980s. Some of that increase is due to increased amounts of housing and commercial infrastructure along coastlines. “However that doesn’t account for big increases in the last decade,” Watson said.

The following infographic paints a gloomy picture of Canada’s equally staggering climate cost trend-line. Without immediate and aggressive climate action measures and without massive infrastructure upgrades, the yearly cost to Canada could reach between $21 to $43 billion by 2050.

The report also looks at low-carbon solutions that can cut emissions and air pollution and benefit the U.S. economy. For instance, doubling the current share of renewable energy could create 500,000 new jobs while substantially cutting the amount of electricity currently generated using coal—improving air quality and reducing health costs.

Renewable energy, even when subsidized, will save America billions of dollars, according to the first national study of the future costs and benefits of renewable portfolio standards (RPS). Twenty-nine states have RPS—regulations requiring increased production of energy from renewable energy sources.

If existing RPS programs continue unchanged from now until 2050, they’d generate about 40 percent of U.S. electricity and save $97 billion in air pollution health costs and $161 billion in climate damage reductions, the Assessing the Costs and Benefits of U.S. Renewable Portfolio Standards study found. But if all states meet their Clean Power Plan obligations solely with renewables they’d generate 35 percent of U.S. electricity by 2030 and 49 percent by 2050.

The health benefit savings and climate impact cost reductions in this scenario would be over $1.1 trillion. However, the Trump Administration signed an Executive Order calling for a review of the Clean Power Plan last March and the new head of the EPA has told states they no longer have to comply.

RPS policies do increase electric system costs and may increase rates in some states but the overall costs are far less than the health benefits and cost reductions, said lead author Ryan Wiser, a senior scientist at Lawrence Berkeley National Laboratory.

“RPS programs provide a big social benefit to all Americans,” Wiser said in an interview. However, RPS policies are not the most efficient way to reduce fossil fuel use, he added.

“Pretty well every economist will tell you that a carbon tax or cap and trade are better.”

In the 1980s, acid rain air pollution was curbed through a cap and trade program championed by George H.W. Bush. It was the first such program in the world and worked quite well, said Wiser.

Switching to renewables will also save enormous amounts of freshwater. Electricity generation is the nation’s biggest water user because coal and gas boil large amounts of water to make electricity. If 35 percent of this generation was renewable it would reduce water use enough to meet the needs of 1.9 million homes, according to Wiser’s study. However, the cost benefits of this water savings is not included in the report, nor are other environmental costs and health benefits.

The Economic Case for Climate Action report also doesn’t include a number of climate-related losses such as reduced crop yields from drought. Those amounted to $56 billion since 2012. Nor does it include economic losses from health impacts of heat waves or impacts on ecosystems and water resources.

“Our report is an under estimate of the real costs of continued use of fossil fuels,” Watson said.

“Anything we estimate now is an underestimate,” said Amir Jina of the University of Chicago and co-author of yet another new study looking at impacts of climate change on the U.S. “Climate change is not isolated to small increases in global temperature, but to local impacts to our health and well-being that could be enormous.”

SOUTH AND MIDWEST TO BE HARDEST HIT

Estimating Economic Damage from Climate Change in the United States is a state-of-the-art analysis that projects future costs and benefits county by county based on current and past data. It found counties in states in the South and lower Midwest would be the hardest hit economically without strong action to curb climate change.