In my own lifetime, carbon dioxide (CO2) levels have increased from approximately 300 ppm in 1950 to 410 ppm as recorded recently at the Mauna Loa observatory in Hawaii – an astounding 36 percent rise. When monitoring started at Mauna Loa in 1958, CO2 levels were 316 ppm, not much higher than pre-industrial levels of 280 ppm. That level remained stable for a 1,000 years but has been rising steadily during the last 200 years. And it will continue to soar unless humanity engages in immediate and drastic actions to bend the curve on rising emissions from the burning of fossil fuels.

Humans did not exist the last time atmospheric carbon dioxide levels were this elevated. According to scientists at UCLA, CO2 levels have not been this high for at least 15 million years. We have entered uncharted territory.

The Increases Are Accelerating

Not only are carbon dioxide levels rising each year, they are accelerating. Carbon dioxide is climbing at twice the pace it was 50 years ago. Even the increases are increasing.

Writing in the National Observer, Eric Holthaus points out the two primary reasons for the unprecedented acceleration of carbon dioxide concentrations in our atmosphere.

1. In spite of our efforts to curb greenhouse gas emissions, the world continues to burn more fossil fuels each year and emissions continue to rise. We are going in the wrong direction. The NOAA (National Oceanic & Atmospheric  Administration) greenhouse gas inventory shows escalating concentrations in recent decades. In the eighties and nineties, the annual increase was 1.5 ppm but now it has jumped to 2.5 ppm per year.

2. Our forests – the world’s most important carbon sinks – are slowly dying. The Earth’s trees suck more than a hundred billion tons of carbon dioxide from the atmosphere each year. Only about one third of human-produced carbon emissions are absorbed by forests and vegetation. The rest stays in the atmosphere or ends up in the oceans.

And with the Earth’s climate changing so rapidly, natural systems are losing their ability to keep  the carbon cycle in balance. The following chart is a dramatic depiction of CO2 growth. 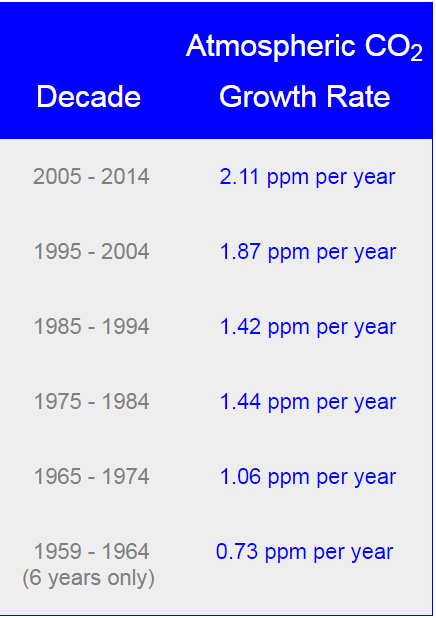 Unless the signatories of the Paris Agreement agree to ratchet up their 2030 emission-reduction targets, the world is still heading for a 3-4 degree Celsius increase, almost double the agreed-upon threshold of 2C degrees considered to be a safe limit by some.

I began this article by noting that CO2 levels have increased some 36 percent in my lifetime. A similar increase in my grandchildren’s lifetime will see this jump to 550-600 parts per million.

We are facing a climate emergency. Climate change demands an urgency and a level of cooperation which is beyond anything the world has ever witnessed, beyond even the level of mobilization seen in World War II. Humanity is racing towards a full-blown crisis.