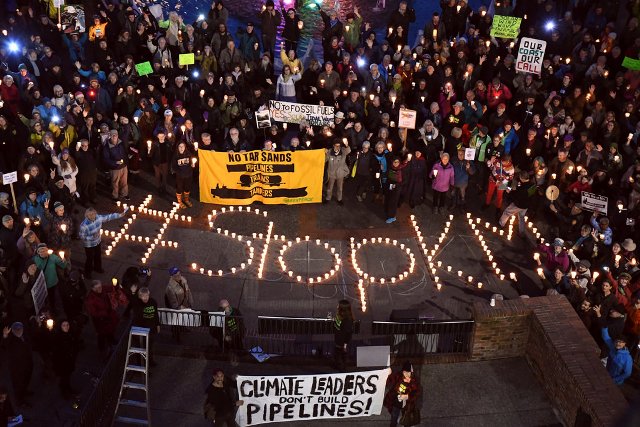 Lynne Quarmby is a professor in the Department of Molecular Biology and Biochemistry at Simon Fraser University. She was arrested for civil disobedience protesting the Trans Mountain pipeline expansion in 2014. In her opinion piece earlier published in the National Observer, Lynne shares eleven reasons why Canadians need to oppose the Kinder Morgan buyout. We are pleased (at Below2°C ) to welcome Lynne as a guest contributor.

The controversy over Canada’s purchase of Kinder Morgan’s Trans Mountain pipeline continues to make headlines as a result of court challenges, protests, escalating costs and work delays. Across the country millions of Canadians are perplexed about the use of public taxpayer dollars to buy a pipeline. Many are simply dumbfounded about investing in fossil fuels at a time when we should be investing instead in the transition to a low-carbon future and clean energy. (Editors)

There is a great deal of misinformation and propaganda about the Kinder Morgan pipeline expansion project. In a compassionate, rational world any one of the following reasons would be enough to stop this project.

The list is not exhaustive, but even so it is varied and sordid, raising serious questions about the morality of a democratic government that not only approved this project, but is subsidizing it with taxpayer dollars.

“Non-conventional fossil fuels that require almost as much energy to recover as they yield, such as the bitumen of the Athabasca tar sands need to stay in the ground,” writes Lynne Quarmby

Here are the main reasons I am adamantly opposed to the Trans Mountain pipeline expansion, [Kinder Morgan Buyout]. Many of them apply to fossil fuel infrastructure projects around the globe.

Roughly half of the oilsands are developed using an open pit mining process that requires complete removal of the “overburden,” otherwise known as boreal forest. The boreal forest is Earth’s most efficient land-based carbon capture system — fully functioning, cost-effective negative emissions — and Canada is actively destroying it.

Processing the mined bitumen is energy-intensive and toxic. The tar, or bitumen is combined with ‘diluent’ — a mixture of volatile, flammable neurotoxins and carcinogens, including benzene— to make ‘dilbit’ (diluted bitumen), a substance that can flow in a pipeline. The other half of oilsands development involves bitumen extraction by an in situ process wherein the tar is ‘steamed’ out of the sand and collected in pipes underground. Both processes involve massive quantities of toxins and both are energy-intensive with substantial CO2 emissions. Not only do the fossil fuel companies in the oilsands get a pass on the “externality” of polluting the atmosphere, they receive substantial subsidies.

Processing bitumen requires not only energy, but also vast quantities of water. Much of it comes from the Athabasca River, fed by a rapidly retreating glacier, which is being diverted and converted into toxic sludge.

There is meant to be ‘reclamation’ of the land post extraction. Yet, after decades of expansion and retiring of old sites, we have acre upon acre of stinking toxic tailings ponds where loud cannons fire frequently to keep waterfowl from landing and dying. A small percentage of the land has been remediated to something better than a tailings pond, leaving nothing more than a species-poor grassland with nothing resembling the peaty soil and biodiversity of a boreal forest, which will take hundreds of years to return, if ever.

5. Indigenous way of life under Threat

Indigenous people living in northern Alberta and Saskatchewan, some of them literally downstream of the oilsands on the Athabasca River, have had their air, water and land polluted and their way of life threatened. In a 2012 article in the International Journal of Human Rights, Jennifer Huseman and Damien Short carefully outline the evidence for impacts of oilsands development on the Indigenous peoples of northern Alberta. Their conclusion:

Many people in Indigenous communities feel that they are in the ﬁnal stages of a battle for survival that began in North America in the seventeenth century, and have called their past and present situation, brought on by settlers and colonial governments, genocide. Their use of the term is not emotive or imprecise, but rather, as we have argued, is in keeping with Lemkin’s concept and highlights the enormity of what the tar sands are doing to the Indians of Treaty 8 and beyond.

They rupture, they break, accidents happen. And when dilbit is in the pipeline, the consequences are significant, as the people of Kalamazoo, Michigan will tell you after experiencing just such a spill in 2010. They can never return to homes infused with toxic fumes from the volatile diluent. In 2007, there was a pipeline accident in Burnaby. That one was “just” oil, but try telling the people who experienced it that it was not so bad. Accidents happen not infrequently — there have been 13 spills along the Trans Mountain pipeline since Kinder Morgan took it over in 2005, as documented on the company’s own “spill history” webpage.

Thanks to “streamlined” environmental regulations by our previous Conservative government under Stephen Harper (retained by the current Liberal government), accidents will be more frequent and more consequential. This might explain how Kinder Morgan can get away with laying anti-spawning mats in the streams it proposed to cross. See, there are no salmon in this stream. This is a good place for our pipeline. When people found the mats, the company was barely given a slap on the wrist (a $920 fine).

Almost one third of the proposed pipeline route crosses the territory of the Secwepecm Nation. Driven by the economic pressures of deprivation, some band councils signed benefit agreements with Kinder Morgan. Yet, as I heard at a recent gathering held on the bank of the Thompson River where the pipeline crosses, there is vehement disagreement about this project among the Secwepempc. Similarly strong opposition is found along the route, climaxing with the Tsleil-Waututh Nation in whose territory the tankers will fill at the terminus of the pipeline. The NEB review process and subsequent hearings for the pipeline egregiously neglected the need for prior and informed consent from First Nations.

On the southwest side of Burnaby Mountain is a “tank farm” where product is stored, awaiting the arrival of a tanker to fill. This is not a farm, as in a place where things are nurtured and grown. It is the opposite. Like the old pipeline, this tank farm is too small to accommodate the tripling of product that is proposed to flow to the coast. The project proposes installing new, larger tanks between the existing ones, obliterating the buffer zone around each tank, which the original design featured in order to prevent a fire in one tank from spreading catastrophically. When built, the tank farm was in the middle of nowhere, but Burnaby has grown up around it and now the tank farm is near a subdivision, an elementary school and the only road to and from the university on top of the mountain (the university where I work).

Comments from the Burnaby Fire Department have been scathing, outlining the risks associated with the proposed densification of tanks full of highly flammable materials and volatile neurotoxins near a forest that is tinder-dry in the summer, all in an earthquake zone. What could possibly go wrong? That the Canadian federal government would approve a project that makes a sacrifice zone of an elementary school, a suburban neighbourhood and a university does not sound like democracy to me.

At the tanker port in Burnaby, an Aframax class tanker will be filling every day. Well, not quite filling, because a full tanker would scrape bottom as it navigates the narrow passage under the Iron Workers’ Memorial Bridge, as it leaves the inlet. The Tsleil-Waututh people have been working hard to restore the pristine waters that fed their nation for thousands of years. They vociferously do not give their consent to this project.

The tankers will pass through the Salish Sea, home to a population of resident Orca whales, sensitive to the sounds of shipping and already starving from diminished salmon stocks. And of course, there is the issue of tanker spills. Spills do and will happen. Our federal government assures us that we have a “world class spill response.” Sadly, that does not mean much. A study from the U.S. National Academy of Science shows that spilled bitumen is likely to sink while the volatile diluent chemicals will float in the air as a highly flammable and toxic cloud. Indeed, this is what was observed at the Kalamazoo spill. Recovery is a fantasy, a delusion. The myth of clean up is propaganda generated by those who do not give a damn.

11. There’s only one Atmosphere

The dilbit is delivered to ports in the U.S. where there are special facilities that can handle the gooey tar so that it can be refined and shipped to Asia or piped to users in the U.S. Wherever it ends up, the tar from Alberta will be burned, converted into usable energy (heat, electricity) and lots of carbon dioxide. Climate science is clear on this: as a society we need to stop increasing our emissions by 2020 and cut them by 50 per cent every decade thereafter. We need to transition off coal as soon as possible. Non-conventional fossil fuels that require almost as much energy to recover as they yield, such as the bitumen of the Athabasca oilsands need to stay in the ground.

So why has the government of Canada approved a pipeline with a 30-50 year lifespan to allow expanded operations in the oilsands? Why are they so determined to push it through?

I understand that in a democracy different people will have different priorities and that compromise is often appropriate. But where is the leadership that would shift subsidies from a dying industry into job training in new sectors such as renewable energy, retrofitting of buildings for energy efficiency, and the transition to new approaches to agriculture that will sequester more carbon?

I am tired of being told that I am naive and that these things cannot be done. I’ve seen the data from Canada and other countries. I know it absolutely can and needs to be done.

Other posts you may have missed..
Will Kinder Morgan Be the Next Pipeline to Nowhere
Kinder Morgan’s Trans Mountain Pipeline: 9 Reasons We Shouldn’t Be Buying The Pipeline or The Spin