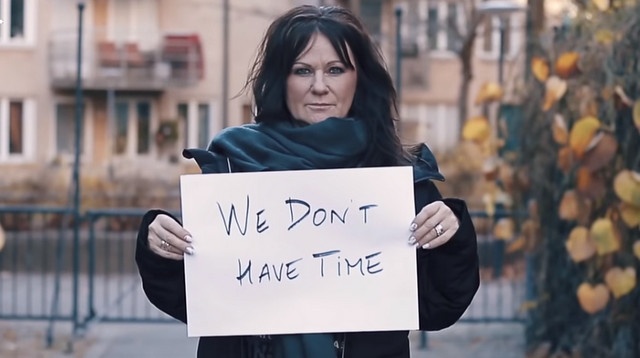 The live global broadcast of the Club of Rome’s Climate Emergency Plan was hosted by Ingmar Rentzhog, the founder of We Don’t Have Time. Ingmar starts the event by having a fire drill. He asks members of the audience and those watching from around the world to imagine they’re on the top floor of a very tall skyscraper. In a serious and chilling tone, he says “I want you to listen very carefully.” And suddenly fire alarm bells go off. “You hear the alarm,” he goes on. “You feel worried and you look at your neighbours and they don’t do anything. Everyone, I mean just everyone, is carrying on business as usual….And so time goes by and you think this must be a false alarm. A couple of minutes later, you start to smell some smoke and you even see the smoke and now you’re feeling really worried. You look at your neighbours but they don’t do anything at all. They just carry on business as usual.”

“And if you think about it, this is exactly how most of us are reacting to the ongoing climate crisis. And the problem is that after smoke you see fire and you see flames. You don’t look at your neighbours. You start to run for the exit, you run for your life. But there’s a problem. Do you remember you’re at the top of that skyscraper and it will be too late.”

He goes on to say that “scientists have been ringing the alarm bells for over a century now. We do see the flashes and the warning signs, we even smell and see the smoke and some of us have already died in that fire. But we still have time to act. But we don’t have time to wait.”

Please view this video. The next two hours may change your life.

Standard YouTube Licence
Climate Seminar by We Don’t Have Time, The Club of Rome and Global Utmaning
November 24 2018

The Club of Rome will formally launch The Climate Emergency Plan on December 4th in the European Parliament. The call to action is crystal clear. “To avoid the worst of the predicted outcomes, global carbon emissions must be cut by half by 2030, to zero by 2050. This is an unprecedented task, requiring a reduction rate of at least 7% annually; no country has to date achieved more than 1.5%. The only possible response is emergency action that will transform human, social, economic and financial systems.”

The call to action comprises 10 major transformations which are essential for the survival of our species and our civilization:

You can download a draft PDF of The Climate Emergency Plan here.

Cathy Orlando is the International Outreach Manager and Canadian Director of Citizens’ Climate Lobby. Her spot on The Climate Emergency video above can be found at the 2:09:38.

Cathy is proud to label Canada as the first country in the world to enact Carbon Fee and Dividend (known officially in Canada as the Federal Carbon Pricing Backstop) for part of its national carbon pricing policy.

Ingmar Rentzhog wraps up the broadcast with these words:

This is not a drill. We hear the alarm, we can see the flashes and we can smell the smoke. It’s crucial that we who understand the urgency of the climate crisis start to act. We must run. Because if we run, others will follow. If we act, others will act. But we don’t have time to wait.

Margaret Klein Salamon is the founding director of The Climate Mobilization. She also reinforces the urgency of climate action by using the theme of fire in the building.

Imagine there is a fire in your house. What do you do? … Your senses are heightened, you are focused like a laser, and you put your entire self into your actions. You enter emergency mode.