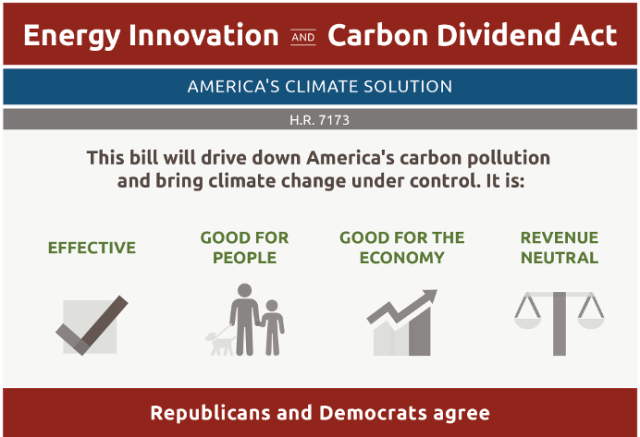 Five members of the U.S. House of Representatives from both parties just introduced the most significant climate change legislation Congress has seen in over a decade.

It does so by applying a nationwide price on carbon emissions and returning the revenue to people each month.

This approach is a climate change solution long advocated by both economists and climate scientists as the simplest, most effective approach to solving climate change. This bill seeks to lower carbon dioxide and other greenhouse gas emissions by at least 33% over the next 10 years.

At a press conference on Wed., Nov. 28, sponsors of the Energy Innovation and Carbon Dividend Act delivered remarks, surrounded by supporters.

“To call this legislation a breakthrough is an understatement,” said Citizens’ Climate Lobby Executive Director Mark Reynolds. “Any long-term solution needs buy-in from both Republicans and Democrats. And now that their constituents are feeling the negative effects of climate change firsthand, both sides are more willing to cooperate on a solution that brings about real change.”

Reynolds said the new policy will create 2.1 million new jobs over the next 10 years, based on estimates from a 2014 Regional Economic Models, Inc. (REMI) study on the effect of a revenue-neutral carbon price on the American economy.

Additionally, implementing this policy will reduce health care costs by cutting pollution, as studies show that poor air quality is responsible for an estimated 60,000 U.S. deaths each year. Thousands more Americans are sickened by toxic air, and costs from air pollution-related illness are estimated at $150 billion per year.

Last week, the Fourth National Climate Assessment estimated that the impact of climate change could reduce the size of the American economy 10 percent by end of the century.

“Unless steps are taken to dramatically reduce heat-trapping emissions, climate change will do irreparable harm to Americans,” said Reynolds. “This bipartisan solution comes not a moment too soon.”

“This aggressive carbon pricing scheme introduced by members from both parties marks an important opportunity to begin to seriously address the immediate threat of climate change,” said Congressman Deutch. “The status quo is unsustainable; the time to act is right now.”

The revenue from the Energy Innovation and Carbon Dividend Act will be returned equally to all American households on a monthly basis, also known as “carbon dividends.” This ensures the program is revenue neutral and does not grow the size of government.

In a paper prepared for Columbia University, economist Noah Kaufman said the legislation “would provide a substantial boost to low carbon generation sources including solar, wind and nuclear energy, and virtually eliminate the use of coal in the U.S. electricity system by 2030.” Kaufman’s paper also said “the rebates received by the average low- and middle-income households would exceed the additional expenditures of these households due to the higher prices caused by the carbon tax.”

Canada and US Linked by Carbon Pricing

“We welcome this development,” says Cathy Orlando, National Director at Citizens’ Climate Lobby Canada. “The Canadian and USA energy and climate policies are de facto linked together. With the predictable market signal from carbon pricing, Canada and the USA will be well-poised to capitalize on the $26 trillion in business opportunities in clean technologies without burdening the taxpayer.”

Congressman Rooney stated, “To let the free market price out coal, we should consider value pricing carbon. A revenue-neutral carbon fee is an efficient, market-driven incentive to move toward natural gas and away from coal, and to support emerging alternative sources of energy.”

Speaking at a press conference Wednesday morning, Congressman Crist said, “Since organizing Florida’s first national climate change summit more than 10 years ago, it’s clear that reducing our carbon dependency is the key to winning this fight. The devastating findings released in last week’s report show that the clock is ticking and continued inaction would be catastrophic — for our environment, our economy, and people’s health. We are taking an historic step with the introduction of this bipartisan legislation: Congress must act with the urgency this crisis demands.” 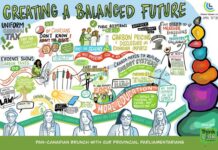 Carbon Pricing Survives in Canada – Now Time To Move On