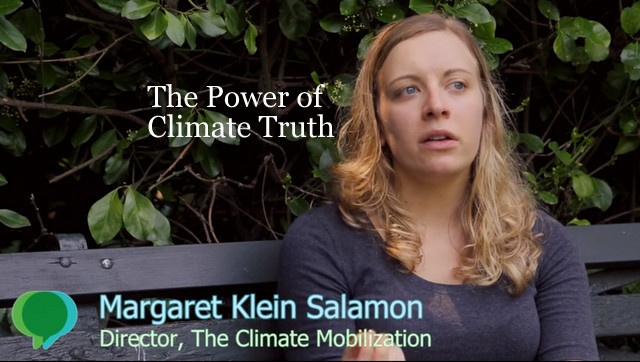 Margaret Klein Salamon of The Climate Mobilization believes that “the climate movement’s greatest and most underutilized strategic asset is climate truth: we are now in a planet-wide climate crisis that threatens civilization and requires an immediate, all-out emergency response.”

The Power of Climate Truth

A functioning democracy must be grounded in the truth. This is why education and the media are both foundational. Citizens cannot discuss issues or come to sound conclusions about policies without a grounding in truth. They cannot make an informed decision about who should represent them if those prospective representatives are deceiving them. Trump’s willingness to lie shamelessly, to contradict himself with other lies when expedient, and to claim that critical media reporting is ‘fake news’ has been labeled ‘post truth politics’.

However, if we consider climate or the other mounting ecological crises, we can see that our politics have ignored critical, existential truth for quite some time. We remain trapped in the era of ‘pre truth politics,’ and it is becoming very dangerous.

Since 1860, scientists have known that carbon was a heat-trapping gas. Exxon knew that burning fossil fuels would cause warming since the 1960s. In addition, James Hansen testified to congress about the climate threat in 1988. The Club of Rome published Limits to Growth in 1970, which acknowledged that: The earth’s interlocking resources – the global system of nature in which we all live – probably cannot support present rates of economic and population growth much beyond the year 2100, if that long, even with advanced technology.

The fundamental truth that an economic system based on infinite growth will lead to collapse, and that humanity must either transform or perish, has never been integrated into national or political rhetoric. [And yet] The only head of state who appears dedicated to telling the truth about the climate crisis is Pope Francis, who has repeatedly said that humanity has a moral responsibility to avert catastrophic climate change—recently criticizing deniers and minimizers by quoting the old testament “Man is stupid, he is stubborn and he does not see.” 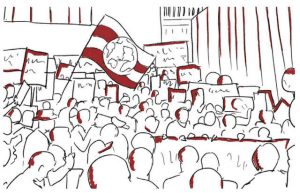 Humans have a remarkable capacity for imagination and fantasy. This precious gift allows us to create marvelous technological breakthroughs and brilliant works of fiction. Our imagination gives us the capacity to re-make the world.

Facing the truth makes us, as individuals and societies, healthier and more resilient. It allows us to approach problems with rationality, creativity and energy that would otherwise be weakened by denial and avoidance. (Image source: The Transformative Power of Climate Truth, Margaret Klein Salamon).

We Must Grow Bigger

The power of truth allows individuals to transcend their limitations and redefine what is possible. Psychologist and climate activist Mary Pipher puts it this way:

We cannot solve a problem that we will not face. With awareness, everything is possible. Once we stop denying the hard truths of our environmental collapse, we can embark on a journey of transformation that begins with the initial trauma—the ‘oh shit’ moment—and can end with transcendence. In fact, despair is often a crucible for growth. When our problems seem too big for us to tackle, there’s really only one solution, which is: We must grow bigger.

We are living in a state of planetary emergency. We are already witnessing superstorms, such as Harvey, Irma, and Maria, increasing droughts and drought-exacerbated agricultural failures, refugee crises, epidemics, political destabilization and state-failure. In the medium term, we face global collapse of governance and food systems, costing humanity billions of lives.

In order to avert the collapse of civilization and the destruction of the living world, we must mobilize our society on the scale of WWII. Greenhouse gases (GHG) must be rapidly reduced to net zero emissions and massive efforts must be taken to draw down the excess of carbon dioxide (CO2) currently in the atmosphere.

The fact that we have warmed the world to this extent, and show little sign of stopping, is evidence of widespread institutional failure. Trump will not lead this necessary mobilization. Rather, he is supercharging extractive capitalism, attempting to delay the bursting of the carbon bubble. However, we were careening towards catastrophe long before his rise.

If we do not stop climate change, we will never be able to build a just, free, healthy, loving society. The arc of history will be abruptly cut off. It will be “game over” — the experiment of humanity organizing into civilizations will have failed.

Once we allow ourselves to embrace this reality, our survival instincts take over. The vast majority of us don’t want to die in a civilizational collapse! I describe how facing existential crises can galvanize individuals and groups to great feats in my paper, Leading the Public into Emergency Mode: A New Strategy for the Climate Movement. We can be like the mother who lifts a truck to pull out her baby or; a man who comes perilously close to drinking himself to death, but emerges from rock bottom, resolved to courageously face his problems rather than flee. We can be like our grandparents, who, when faced with the threat of global fascism, rose to the challenge and embraced victory as their common purpose. We don’t have to panic and we don’t have to deny. We can look clearly at the climate crisis and resolve ourselves to work to stop it.

We cannot expect anyone else to save us. We must do it ourselves.