Below 2C
Home Climate Climate Emergency Ending The Climate Silence: We Have To Talk About It 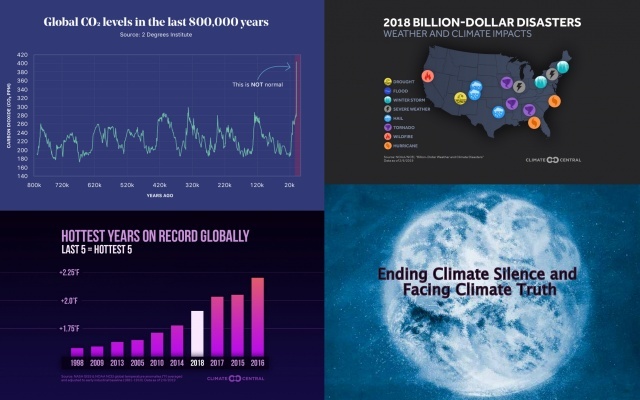 We are in a climate crunch. Decades of procrastination, stalling and looking the other way on climate have left the world in a near desperate struggle for survival as the earth’s temperature nears 1.5C warmer than pre-industrial levels. Canadians and Americans will be going to the polls in 2019 and 2020 respectively. What better time to ratchet up the dialogue on climate and end the silence that has left climate change as a peripheral issue in previous election campaigns. Ending climate silence is the first step needed to move the environment and the future of our children and grandchildren to the top of the political agenda. Either we solve the climate crisis or we don’t. (Editorial comments)

Canadian climate scientist Katherine Hayhoe recently gave a TED talk titled “The most important thing you can do to fight climate change: talk about it.” In it, she cites the Yale Program on Climate Change Communication, which finds that two-thirds of Americans never talk about climate change even though 70% believe it is a real problem. This “spiral of silence” is itself a big problem: “People concerned about the climate avoid voicing their worry because they rarely hear others discussing the topic, and thus the spiral continues.”

But collective silence is dangerous, especially for a problem as large and urgent as climate change. How do we pull out of this spiral? According to Hayhoe, we have to talk about it. But that can be hard to do.

It’s hard to talk about It

Humans are social creatures. Belonging is a fundamental and universal human need, and as a result, we often choose to conform to our group. That’s why our friends and family have far more influence on our view than do experts. Research suggests that the silencing effect is most powerful when talking to family, friends, or neighbours about obtrusive issues. So, the need for belonging makes overcoming the spiral of silence with friends and family even harder.

But in fact, we have much more common ground on climate change than expected. In a research project using dialogue between people of opposing views, participants agreed on key points, and in each case there was at least one topic where the two took positions contrary to what they predicted of the other.

How to talk about climate change

Even when we do talk about climate change, our instinct on what to talk about is typically unhelpful. Rather than starting with the science and facts as we’re apt to do, Hayhoe suggests that we find that common ground by looking for shared values. For example, maybe you’re both parents, or maybe you both have the same hobby. Second, don’t use fear, but rather rational hope. Talk about solutions that are “practical, viable, accessible and attractive”.

A November Angus Reid poll showed that 61% of Canadians say they feel they can personally help to reduce climate change. Clearly many regular citizens are thinking about acting, even if they’re not yet talking about it. But maybe they’re ready? You can always show them your behaviour change, and then ask them a curious question to see if they want to talk about it. Then listen. Start with someone you trust.

Speaking up for good policy is a key part of this game of climate show and tell. Given the need for climate policy to take us through this low-carbon transition in the coming decades, debating what good policy looks like right now is more important than ever. Opponents are raising their voices, supporters should too.

Abacus Data polling from November showed that 59% of Canadians think that the national carbon price is a step in the right direction. Could the spiral of silence also be affecting Canada? Are some people more on board than they dare say? If so, what can we do about it?

Disagreeing with our friends and family is hard. Recent research shows that some will choose non-environmental behaviours to fit in with their group, despite caring about the environment.

Going first is hard, but important. In any given group—of coworkers, friends or family—someone has to be the first one to stand alone and talk about how carbon pricing actually makes pretty good economic sense.

But going second matters too. It’s risky to lead. So, it’s equally important to have a person who supports the initiative of another as the first follower. That means supporting others when they speak up for climate action. Voice your agreement rather than staying silent. And of course, voice your concerns as well! Join the discussion rather than avoiding it, even if it’s hard.

Tell us how you’re speaking up

Here at the Ecofiscal Commission, you’ve heard our position many times: do as much as you can with carbon pricing, and support it with policies that do things carbon pricing cannot.

What is your position on climate policy? What conversations are you having in your communities? We’d love to hear in the comments below your stories of action and efforts to end climate silence; and how you’ve followed someone else’s lead too! Let’s start a conversation.

This article was first published in the ECOFISCAL Commission Blog section by Annette Dubreuil.