Below 2C
Home Climate Climate Breakdown Ten Years to Zero: The Emergency And The Mobilization

Ten Years To Zero is becoming the rallying cry for a world finally beginning to come to grips with the climate emergency that is upon us. We still have time to solve this climate thing, but we don’t have time to wait.

We are pleased to feature this newsletter from The Climate Mobilization and Margaret Klein Salamon (with minor editorial comments). It first published here.

In the past year, thousands of individuals have recognized the Climate Emergency for what it is and have thrown themselves into organizing their communities, amplifying the voices of scientists, and demanding action from their elected officials. The Climate Mobilization is one of these groups: we are focusing on building a network of cities that have begun to take action.

But thankfully, we are far from alone! The Climate Emergency message and the Climate Mobilization solution have been taken up by groups all over the world, and here at home. We are thrilled.

Which is why we’re starting the Climate Emergency Movement Newsletter.  In this regular update, we’ll highlight successful direct action by climate activists who are building local momentum for a global transformation.  We hope you’ll read more about these amazing activists’ work and join where you can and however you can. These efforts aim to not just save lives, but to also to transform life on this planet so all species can be supported by a thriving biosphere and a culture rooted in justice and sustainability.

The City Council of Vancouver, Canada, voted unanimously to declare a Climate Emergency on January 17.

The Regional Council of Halifax, Canada, declared a Climate Emergency on January 29.

The City of Montreal, Canada, (and 82 local councils) under the umbrella group of the Communauté métropolitaine de Montréal  adopted an emergency resolution. This entity represents half of Quebec’s population.

As of this writing, more than 12 million people living in the UK live in a city that has declared a Climate Emergency.

Cornwall, UK, declared a Climate Emergency and committed to seeking carbon neutrality by 2030 on January 22.

Lambeth, UK, a borough of London, declared a Climate Emergency and a target date for carbon neutrality of 2030 on January 23.

An interactive map and a full list of local governments that have declared a Climate Emergency, along with links to each declaration, can be found here. 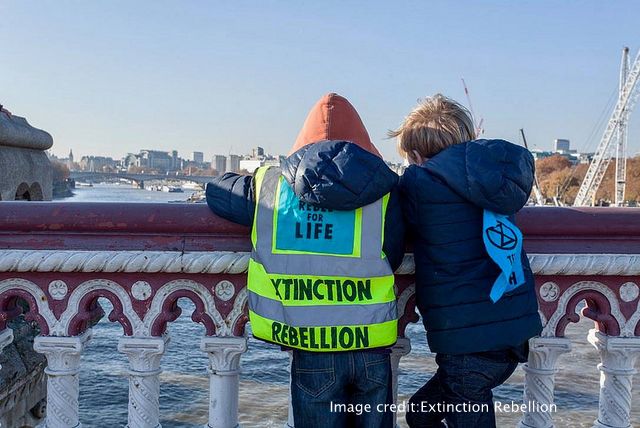 You may know Extinction Rebellion (XR) as the group that stood in front of traffic and shut down London in a successful effort to convince the London Mayor and City Assembly to declare a Climate Emergency.  On January 26, nine protesters were arrested at a mass mobilization at Rockefeller Center, a major action in XR’s growing national escalation in the U.S. Read more about XR coming to New York in this great article from The Intercept.

Sunrise Movement and the Presidential Primaries

On November 13, 2018, dozens of young people, including newly elected Rep. Alexandria Ocasio-Cortez (AOC), engaged in a sit-in outside soon-to-be-Speaker of the House of Representatives Pelosi’s office, where 51 were arrested. The protest brought mainstream attention to the Green New Deal and shifted the national conversation in the United States.

The protesters were part of the Sunrise Movement, a network of young people and allies who engage in direct action, political advocacy, and training to stop climate change and create millions of good-paying jobs in the process. The Sunrise Movement uses a hub-based organizing model and encourages participants to take initiative—one of the group’s principles is that any three people, working as a group, can take action in the name of Sunrise.

Since the November protest, more than 40 Democratic representatives have signed on in support of a Select Committee on a Green New Deal.  Members of the Sunrise Movement continue to stage local direct actions, including displaying a giant banner and signs at the Sen. Kamala Harris’s first major rally to kick off her bid for the Democratic Party nomination for president in 2020. The banner demanded she endorse a Green New Deal—which Sen. Harris then did the next day.

The Sunrise Movement and Justice Democrats—the group coordinating with AOC and likeminded legislators and candidates—have fully signed onto The Climate Mobilization’s vision for rapid, emergency transformation.

The School Strike 4 Climate movement, pioneered by the indomitable 16-year old Swedish climate activist Greta Thunberg is growing exponentially! Thousands of students in Belgium, Switzerland, and Germany have  participated in the global School Strike for Climate movement, gathering during school days once a month to demand politicians address the catastrophic threat to their future.

In Australia, young people are building toward a global climate strike on March 15. Students throughout Australia (and around the world) will walk out of class in support of three demands: First, stop the construction of a giant coal mine by Adani in Queensland that would produce 10 million tons (rising to 27.5 million tons) of coal per year. Second, stop all new coal and gas permits. Third, transition to 100% renewable energy by 2030.  Groups in at least 25 cities throughout Australia plan to participate.

The March 15 school strike will be building on past efforts, including a strike on November 30, 2018, and protests in multiple cities on December 8, when students and first nations people led more than 15,000 Australians through city streets to oppose the start of construction on the Adani coal mine.

Climate change is no longer abstract. We cannot look away anymore.