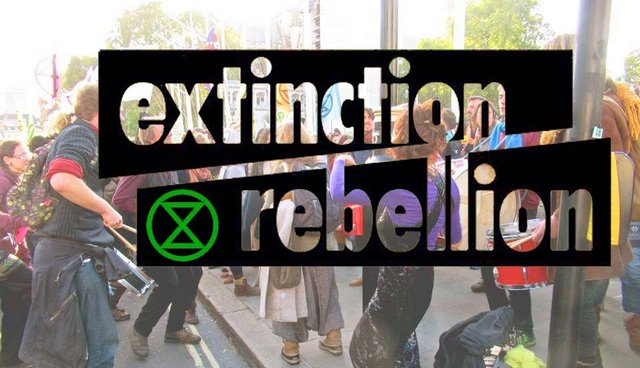 Humans are facing an unprecedented global emergency. Governments and world leaders are failing to protect us. The time for gradual, incremental and non-disruptive climate action has come and gone. To survive, it will take everything we’ve got. It will take rebellion. ~ Below2°C Editor

Brent Patterson is with Peace Brigades International in Canada and a columnist with Rabble.ca. His recent article on the rise of Extinction Rebellion in Canada is featured in Below2C. It was first published in Rabble.

The Extinction Rebellion (XR) movement was formally launched with a declaration and a direct action on October 31, 2018 in London, England. Just over four months later, how is it faring?

First off, XR was formed as an explicitly direct action-focused movement. Guardian columnist and XR supporter George Monbiot has written, “This is a movement devoted to disruptive, non-violent disobedience in protest against ecological collapse.”

UK-based XR campaigner Tiana Jacout has commented, “We have tried marching, and lobbying, and signing petitions. Nothing has brought about the change that is needed.” And her colleague Gail Bradbrook has stated, “Only large-scale economic disruption can rapidly bring the government to the table to discuss our demands.”

To date, some of the group’s direct actions in the UK have included: blocking roads that lead to Parliament Square (October 31), blocking and spray-painting the Department for Business, Energy and Industrial Strategy (November 12), shutting down the Brazilian embassy with an LGBTQ+ dance party (November 15), occupying five bridges in central London (November 17), calling on the BBC to make coverage of climate breakdown a top priority (December 20), and disrupting Fashion Week to highlight the climate impacts of disposable fashion (February 17).

More recently, XR activists Cameron Joshi and Boden Franklin have commented, “Anti-capitalism, decolonization and anti-oppression work cannot be an afterthought – shoved into a five-minute window between speeches or tucked away at the end of an action.”

Joshi and Franklin also note, “The use of arrests to crowd out police stations and gain media coverage is innovative. However, the narrow focus on this form of protest inevitably elevates white middle-class British voices, for whom arrest isn’t as big of a deal.”

They are concerned that this approach of focusing on arrests “excludes people of colour, trans folk, anyone with a precarious visa status, and working-class people, for whom arrest is a potentially lethal and life-ruining prospect.”

So, what’s next and how can these concerns be addressed?

An XR international week of action is now being planned for April 15 to 22.

On February 20, Vice  reported, “[XR campaigner Roger] Hallam says the plan is to gather about 10,000 people in central London alone to create a ‘Glastonbury-esque’ atmosphere, and permanently occupy several roundabouts day after day, until the government creates a response in a substantive way to XR’s demands.”

Vice adds, “Bradbrook says it’s great that the UK is leading the rebellion, but that the protest will need to go global, with amendments in international law, trade agreements and climate agreements crucial.”

On that front, Rolling Stone has noted, “Since [the bridge occupations in November 2018], over 200 Extinction Rebellion outposts have emerged around the world.”

XR has now launched in the United States and that group has expressed its intention to participate in the week of action this coming April.

Notably they’ve said, “XR US will use the week of rebellion, in part, to do what rebellions need the most: build solidarity – in particular with groups and movements who are fighting the fossil fuel industry using direct action, particularly frontline camps, urban, and rural environmental justice groups.”

Joshi and Franklin may well see that as an important step forward for XR. They’ve noted, “We need to remember that being part of an integrated ecology of movements is much more threatening to entrenched power than acting in isolation.”

There are now XR Facebook pages in most Canadian cities and XR chapters have participated in actions in Victoria, Ottawa, Charlottetown and other communities.

These chapters may also be grappling with concerns similar to those noted above, alongside with their own localized challenges as experienced and first-time activists at different places on the ideological and tactical spectrums come together in a courageous attempt to build a mass movement strong enough to stop climate breakdown.

They may also be talking about how to prioritize solidarity with front-line Indigenous struggles in addition to the three demands framed by XR in the UK, given one cannot have a rebellion in this country without Indigenous rights and decolonization as central tenets:

You can find your local XR chapter in this country via the Extinction Rebellion Canada Facebook page.

Related articles:
Fear and Frustration Over Climate Trigger New Climate Movements
Ending The Climate Silence: We Have To Talk About It