Below 2C
Home Climate Climate Emergency Greta On Climate: Is My Microphone On, Can You Hear Me? 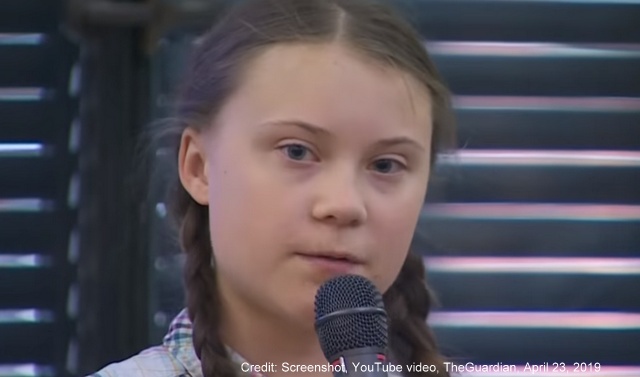 This post consists of excerpts from Greta Thunberg’s recent speech to the UK Houses of Parliament along with the video of the event. Greta does not dance around the climate thing. She bluntly asks the Members of Parliament “Did you hear what I just said? Is my English OK? Is the microphone on? Because I’m beginning to wonder.”

Can You Hear Me?

In the year 2030 I will be 26 years old. My little sister Beata will be 23. Just like many of your own children or grandchildren. That is a great age, we have been told. When you have all of your life ahead of you. But I am not so sure it will be that great for us.

Our future was sold. You lied to us.

Now we probably don’t even have a future any more. Because that future was sold so that a small number of people could make unimaginable amounts of money. It was stolen from us every time you said that the sky was the limit, and that you only live once.

You lied to us. You gave us false hope. You told us that the future was something to look forward to. And the saddest thing is that most children are not even aware of the fate that awaits us. We will not understand it until it’s too late. And yet we are the lucky ones. Those who will be affected the hardest are already suffering the consequences. But their voices are not heard.

Around the year 2030, 10 years 252 days and 10 hours away from now, we will be in a position where we set off an irreversible chain reaction beyond human control, that will most likely lead to the end of our civilisation as we know it. That is unless in that time, permanent and unprecedented changes in all aspects of society have taken place, including a reduction of CO2 emissions by at least 50%.

And please note that these calculations are depending on inventions that have not yet been invented at scale, inventions that are supposed to clear the atmosphere of astronomical amounts of carbon dioxide.

Furthermore, these calculations do not include unforeseen tipping points and feedback loops like the extremely powerful methane gas escaping from rapidly thawing arctic permafrost.

Nor do these scientific calculations include already locked-in warming hidden by toxic air pollution. Nor the aspect of equity – or climate justice – clearly stated throughout the Paris agreement, which is absolutely necessary to make it work on a global scale.

Is the microphone on? Because I’m beginning to wonder.

During the last six months I have travelled around Europe for hundreds of hours in trains, electric cars and buses, repeating these life-changing words over and over again. But no one seems to be talking about it, and nothing has changed. In fact, the emissions are still rising.

When I have been travelling around to speak in different countries, I am always offered help to write about the specific climate policies in specific countries. But that is not really necessary. Because the basic problem is the same everywhere. And the basic problem is that basically nothing is being done to halt – or even slow – climate and ecological breakdown, despite all the beautiful words and promises.

The UK is, however, very special. Not only for its mind-blowing historical carbon debt, but also for its current, very creative, carbon accounting.

Since 1990 the UK has achieved a 37% reduction of its territorial CO2 emissions, according to the Global Carbon Project. And that does sound very impressive. But these numbers do not include emissions from aviation, shipping and those associated with imports and exports. If these numbers are included the reduction is around 10% since 1990 – or an an average of 0.4% a year, according to Tyndall Manchester.

Lowering our emissions is a not enough

But perhaps the most dangerous misconception about the climate crisis is that we have to “lower” our emissions. Because that is far from enough. Our emissions have to stop if we are to stay below 1.5-2C of warming. The “lowering of emissions” is of course necessary but it is only the beginning of a fast process that must lead to a stop within a couple of decades, or less. And by “stop” I mean net zero – and then quickly on to negative figures. That rules out most of today’s politics.

The fact that we are speaking of “lowering” instead of “stopping” emissions is perhaps the greatest force behind the continuing business as usual. The UK’s active current support of new exploitation of fossil fuels – for example, the UK shale gas fracking industry, the expansion of its North Sea oil and gas fields, the expansion of airports as well as the planning permission for a brand new coal mine – is beyond absurd.

This ongoing irresponsible behaviour will no doubt be remembered in history as one of the greatest failures of humankind.

People always tell me and the other millions of school strikers that we should be proud of ourselves for what we have accomplished. But the only thing that we need to look at is the emission curve. And I’m sorry, but it’s still rising. That curve is the only thing we should look at.

Every time we make a decision we should ask ourselves; how will this decision affect that curve? We should no longer measure our wealth and success in the graph that shows economic growth, but in the curve that shows the emissions of greenhouse gases. We should no longer only ask: “Have we got enough money to go through with this?” but also: “Have we got enough of the carbon budget to spare to go through with this?” That should and must become the centre of our new currency.

Both the easiest and the hardest issue

The climate crisis is both the easiest and the hardest issue we have ever faced. The easiest because we know what we must do. We must stop the emissions of greenhouse gases. The hardest because our current economics are still totally dependent on burning fossil fuels, and thereby destroying ecosystems in order to create everlasting economic growth.

We say that all those solutions needed are not known to anyone and therefore we must unite behind the science and find them together along the way. But you do not listen to that. Because those answers are for solving a crisis that most of you don’t even fully understand. Or don’t want to understand. [But students and young people do understand. They get it].

You don’t listen to the science because you are only interested in solutions that will enable you to carry on like before. Like now. And those answers don’t exist any more. Because you did not act in time.

Avoiding climate breakdown will require cathedral thinking. We must lay the foundation while we may not know exactly how to build the ceiling.

Sometimes we just simply have to find a way. The moment we decide to fulfil something, we can do anything. And I’m sure that the moment we start behaving as if we were in an emergency, we can avoid climate and ecological catastrophe. Humans are very adaptable: we can still fix this. But the opportunity to do so will not last for long. We must start today. We have no more excuses.

We children are not sacrificing our education and our childhood for you to tell us what you consider is politically possible in the society that you have created. We have not taken to the streets for you to take selfies with us, and tell us that you really admire what we do.

I hope my microphone was on. I hope you could all hear me.

Climate Action: It’s Time To Switch to Cathedral Mode
Can Students Save Humanity When We Adults Could Not?