Below 2C
Home Climate Carbon Emissions The Carbon Tax Is Not a Tax Grab, Not a Job Killer 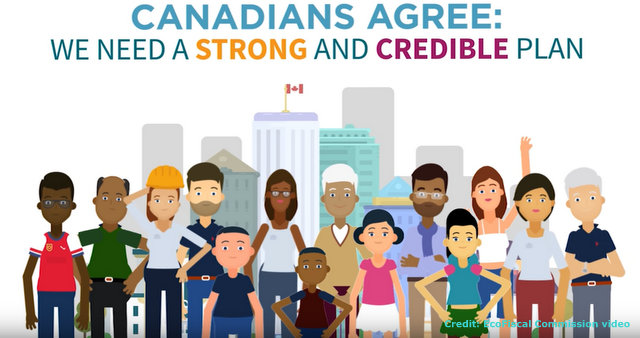 Most Canadians are worried about the climate. According to a recent survey, nearly 66% see climate as the top priority in this fall’s election. But sadly half of those surveyed would not pay out more than $100 per year to fight climate change—less than $10 per month. “The findings point to a population that is both gravely concerned about the heating of the planet but largely unprepared to make significant sacrifices in order to stave off an environmental crisis,” reports the CBC.

One of the reasons for this disconnect may lie in the confusing narrative surrounding the climate, making Canadians reticent to going all-in on climate. In the following OpEd, first published in the Waterloo Region Record, Caterina Lindman zeroes in on the need for clarity surrounding the pricing of pollution—the carbon tax. (Editor Intro)

It would be wonderful if everyone and, in particular, politicians, displayed integrity in their communications. “Say what you mean, mean what you say, and don’t be mean when you say it.”

The debate over the carbon tax is dysfunctional

In Canadian politics, it seems that the opposition parties see their role as opposing anything that the governing party puts forward, regardless of any merits of the policy. It would be much better if opposing parties offered a true critique of policy — here’s what is good about it and here’s how it can be improved. Unfortunately, the debate over the most effective solution to climate change, which is the carbon tax, has become dysfunctional.

The carbon tax, with 90 per cent of the monies collected returned to tax filers, is a good, conservative policy. It lines up with the conservative value of putting a price on pollution, and letting entrepreneurs compete in the market to innovate the best solutions for creating and conserving energy, with the least amount of government intervention through regulations and subsidies.

Subsidies are difficult to employ well, as it is difficult to pick the most efficient options in ever-evolving markets. Because the revenues from a carbon tax are returned to citizens, it keeps the money flowing into the economy and is a net creator of jobs. People have a financial incentive to reduce their carbon footprint, and most households will receive more in climate action incentives than they pay in pollution fees. The carbon price needs to increase steadily to keep the transition to a low-carbon economy happening in an orderly fashion. An increasing price on carbon will make investments in new fossil-fuel infrastructure uneconomic. Canada’s carbon tax is the best tool the government has to fight climate destabilization.

Rather than the Conservative Party praising the merits of the carbon tax, we have them fighting it by calling it a “tax grab” and a “job-killing carbon tax.” The federal government should not be afraid to call it a carbon tax. By refusing to say the word “tax,” it is helping to make “tax” a four-letter word. It’s clearly not a “tax grab” because 90 per cent of the money is returned to tax filers and the other 10 per cent is used to make schools and hospitals more energy efficient. A carbon tax, with the money returned to households, is not a job killer, but is a net job creator.

Another criticism of the carbon tax is that it is too small to be effective in meeting our targets. This criticism has merit, and therefore, the proper response is to raise the carbon tax, and the corresponding climate action incentive payments, as it then becomes more certain that we will meet our climate commitments.

Our government also said, both in the Paris agreement and in this week’s climate emergency declaration, that we’d pursue reductions greater than 30 per cent because we want to make best efforts to limit global heating to 1.5 C, which means a 41 per cent reduction in GHG levels.

This week, the federal government announced approval for the TransMountain pipeline, which will increase national and international emissions. It also announced that it will not be increasing the carbon tax beyond 2022 and will leave it at $50 a tonne. I am disappointed by both of these announcements. Perhaps the government felt like it was being attacked unfairly by the opposition, both with the accusation that it didn’t care about workers in Alberta, and with the fight over the carbon tax becoming so toxic that several Conservative provincial governments are suing the federal government over what is essentially a conservative policy.

If we want to “mean what we say” in our climate emergency declaration, then we need to raise the price on carbon pollution in 2023 and beyond. What Canadians dearly need to know is what level of carbon tax would be in keeping with our fair share to keep global heating below 1.5 C, and which party has the integrity to put it in place?