Below 2C
Home Climate Climate Emergency Canada Continues To Be Bipolar on Climate: #ClimateEmergency and #TMX 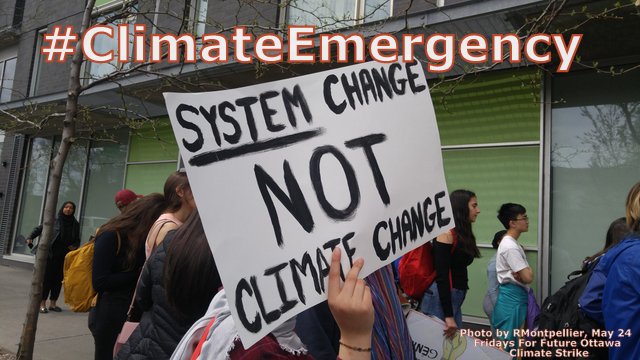 Canada’s Parliament has passed a “non-binding” motion declaring a climate emergency. By doing so, our Members of Parliament recognize that “climate change is a real and urgent crisis driven by human activity.” The motion is intended to “declare that Canada is in a national climate emergency which requires, as a response, that Canada commit to meeting its national emissions target under the Paris Agreement and to making deeper reductions in line with the Agreement’s objective of holding global warming below two degrees Celsius and pursuing efforts to keep global warming below 1.5 degrees Celsius.”

Normally I would be giving my Members of Parliament a standing ovation for such an ambitious action on climate. But I immediately realized that the reason it was “non-binding” was to leave the door open for the approval of the Trans Mountain pipeline (TMX) which quickly followed the very next day.

Let’s remember that the Liberals have  “the economy and the environment go hand in hand” slogan tattooed on their chest. “We do not see these goals as irreconcilable. We see them as complementary,” said Trudeau during his press conference. But as John Ivison writes in his National Post column, “The Trudeau economy/environment bandwagon is still rolling along, albeit on three wheels.”

“To those who want sustainable energy and a cleaner environment, know that I want that too. But in order to bridge the gap between where we are and where we are going, we need money to pay for it,” said Trudeau in support of his decision.

That’s like saying we need to keep selling cigarettes to have money to fight cancer. ~ Eugene Kung, lawyer with West Coast Environmental Law.

Many of Trudeau’s press conference comments simply make my activist blood boil. The hypocrisy underlying his speech is disgraceful. He and high ranking ministers with him at the conference looked like even they did not believe his words. Like there were a thousand other places they’d rather be.

The bipolar character of the Trudeau government climate plan has not gone unnoticed around the globe. Even Greta Thunberg who heads the worldwide Futures For Friday took to Twitter to highlight the incongruence of the two actions.

One second they declare a #ClimateEmergency and the next second they say yes to expand a pipeline.

This is shameful.
But of course this is not only in Canada, we can unfortunately see the same pattern everywhere…https://t.co/zVbWXnLBSQ

The announcement is nothing more than “a high wire act on which the Prime Minister is staking his future,” according to Ivison. “Trudeau attempted to sugar the pill by saying that every dollar earned from the project would be reinvested in clean energy.” But that seems like a roundabout way to transition to clean energy. Why not spend the $13.8 billion—the $9.3 billion expansion plus the $4.5 billion to buy the pipeline—to begin the managed decline of fossil fuels—retraining the thousands of displaced oil industry workers, subsidizing the conversion of transportation to full-out electric, research and other measures needed to get to zero carbon by 2050.

Elizabeth May was the only party leader who attended the debate. The other three—Justin Trudeau, Jagmeet Singh and Andrew Scheer—were at the Toronto Raptors parade rather than debating the climate emergency, easily the most critical issue of our times. This prompted May to tweet a question to the PM:

Urgent question to Justin Trudeau: What about the word “emergency” do you not understand? We have almost no time left to hold to 1.5 degrees C. This decision is a bet against our future. #NOTMX #climate #GPC

It doesn’t matter how you sugar-coat this decision. “The timing is ironic for sure,” said Cat Abreu, executive director of Climate Action Network. “We’re continuing to have a conversation about addressing climate change in Canada while skirting around the elephant in the room, which is emissions from oil and gas.”

TMX Will Likely Never Be Completed

There’s a very strong likelihood that the Trans Mountain pipeline (TMX) will never reach completion. “It could be a stranded asset long before it’s paid off,” claims Eugene Kung (West Coast Environmental Law) pointing to a recent Bank of Canada report that exposes the vulnerability to our financial system from projects such as the TMX.

The fossil fuel sector is on the ropes. “This industry is on life support,” says Mark Scholz, President and CEO of The Canadian Association of Oilwell Drilling Contractors. And yet The Feds and the provinces continue to support oil and LNG infrastructure.

The globe is on fire. Tripling the capacity of the TMX and increasing Tar Sands production is not climate leadership. Is this the best we can expect from our government and our political leaders?