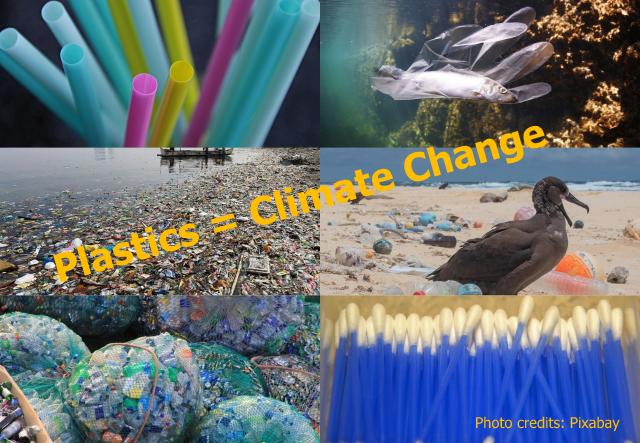 Some of you will remember The Graduate (1967) starring Dustin Hoffman who played the character Ben, a young graduate attending a party. When asked what he plans to do with his future, Mr. Maguire takes him aside and says “I just want to say one word to you, just one word, plastics.” Of course that bit of advice was meant to point young Ben to a  future career in plastics and the opportunities that would bring. Now some 50 years later, opportunity has turned into a nightmare. (Editor’s intro)

We are pleased to welcome Annette Olson as a contributor to Below2ºC. In Part 1—the first of two articles—she outlines the impact plastic makes, including the heaviest baggage of all, its contribution to climate change. How to adjust our relationship with plastic will be described in Part 2. This article was first published in Climate Steps.

Plastic first came into our lives 150 years ago, and we fell in love, hard. But although it made and makes our lives wonderful in many ways, it comes with baggage now. Lots and lots of terrible baggage.

Let’s start off by noting that the term “plastic” is the common term for any long-chain molecule that can be shaped and reshaped by heat (think of the adverb “plastic”).  Celluloid, as in the film, was the first plastic made from natural materials, and was first made in 1863 to replace ivory as billiard-balls.  Yep, plastic began as a result of elephants being over-hunted and thus the need to replace the ivory in a barroom game; so at first, it helped take pressure off the environment.

Forty plus years later came Bakelite, the first synthetic plastic, made from mixing phenol and formaldehyde.  Then, in the 1940s, the numbers of plastics began exploding.  Today we have thousands of types including: nylon, Teflon®, Saran® (i.e., Saran Wrap®), polycarbonates (including the lovely sounding acrylonitrile butadiene styrene), polyester, PVCs, PETs, PDKs, Styrofoam®, polyethylenes, polypropylenes, polyurethanes, acrylics, epoxies, phenolics, melamine formaldehyde (aka Formica®), and silicone poly. (For more, see Wikipedia and How Stuff Works). Writing this, I just realized that when I paint with acrylic paint, I am painting with plastic. It makes so much sense now—it looks like plastic.

Obviously, we wanted this new creature in our lives. Today, plastic is ubiquitous. We manufacture hundreds of millions of tons of plastic each year; in 2015, 35-45% of that was for packaging. Plastic is now “in-your-face.” It is promoted, sold, used and discarded everywhere.

We’ve woken to reality and have started a major campaign focusing on what is called single-use plastic.  What is really meant here, though, is single-use, “wasteful” plastic, in contrast to “needed” plastic. Some plastics are actually needed and make a huge difference in our lives. I am thinking of intravenous tubes, for instance, or of 3D-printed plastic braces to help people walk. Plastic can be useful, even for the environment: rain barrels, and lighter cars and planes so that less energy is used. Yet, even multi-use or very useful single-use plastic should be recycled.

Illustrative point: I was debating on what plastics I really depend on, besides my computer, and then I realized that I need plastic. I had cataract surgery this year, in both eyes, and the new lenses in my eyes are plastic. I was beginning to have quite a lot of trouble reading and driving, and now I can see. I am lucky to live in this age. (Btw, I am way too young to have had cataracts!)

But do I/we need plastic microbeads in our face cleansers? Not.in.the.least. Single-use plastic drink bottles and plastic takeout containers? Nuh-uh. Styrofoam and its equivalents? Not now that we have mushroom packaging. Plastic toys?  No: we are already eating a credit card’s worth of plastic a week through our drinking water (especially through bottled drinking water), via shellfish, etc., and by plastic chemicals leaching into our food via microwaving. So why get young, chewing infants started on this habit?

We all know now, though, that we’ve gone too far with trying to convert everything to plastic, with our world having giant piles of plastic bags and bottles and coolers and toys on land and in our oceans.

“Sufficient plastic is currently manufactured each year to weigh as much as all seven billion–plus humans on the planet.” ~ Scientific American

Plastics degrade with sunlight and heat, although not biologically, as only one creature has evolved naturally to eat them. With degradation, they only break down into smaller and smaller pieces, aka, microplastics, as well as emit gases.

Life everywhere is encountering plastic and its residues—not just us, but also bacteria, plankton, fish, seabirds, marine mammals. Microplastics were first found in seabirds during the 1960s. Imagine how plastics and their toxins are working their way up the food chain today.

The two plastics most notorious for being extra durable are polystyrene and PVCs (Polyvinyl chlorides). These break into smaller pieces and last for hundreds of years although a number of microbes may evolve eventually to eat them. However, if buried in oxygen-deprived environments, plastic may last perhaps thousands of years.

Future geologists easily will be able to determine the boundary of the Anthropocene (which means the “human era”) due to a layer of minute plastic particles.

According to the Center for International Environmental Law’s (CIEL) Plastic and Climate: The Hidden Costs of a Plastic Planet 2019 Report, “by 2050, annual emissions could grow to more than 2.75 billion metric tons of CO2e from plastic production and incineration.”

As of 2019, the full plastic life-cycle is annually equal to the emissions from 189 five-hundred-megawatt coal power plants.

These are some of the bad ways that plastic intersects with climate change:

Can Plastic Help the Climate Fight?

The development of more efficient plastics can create lighter materials and lighter packaging, and thus decrease the amount of energy required to move materials. But for many products, i.e., the wasteful plastic, does it help enough to save on the environmental impacts it creates? No. The American Chemical Society/ACS (which has a pro-plastics council) talks a bit about the responsibility that the industry must take on, but they do not mention climate change. Is single-use, wasteful packaging worth its impact on climate change? No. So we need to fight this, make the ACS aware that we are extremely concerned about this, among other climate steps.

In my experience as a community organizer, the need to fix the plastic problem helps people take their first steps towards environmental action, beyond recycling.

Then, once engaged in this step, it is easier for people to take the next step – helping change our plastic and climate culture and infrastructure.

You Eat 50,000 Plastic Particles A Year
Plastics are Killing the Oceans