Below 2C
Home Solutions Climate Litigation Can Litigation Save Us From Climate Change? 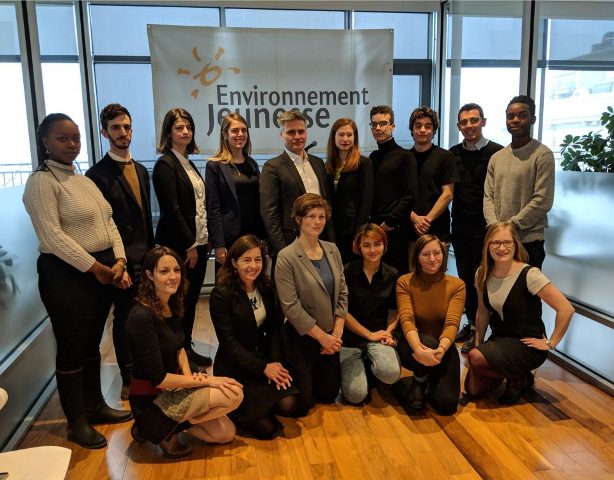 Catherine Gauthier (executive director of Environment Jeunesse) is fed up with PM Justin Trudeau’s bold promises on the climate while simultaneously supporting tarsands/oilsands projects and pipelines which continue to grow Canada’s greenhouse gas emissions. She heads a group which has recently launched a lawsuit against the Canadian government. Litigation is fast becoming an obvious weapon in the climate action toolbox.

The class action suit was [recently launched] by a Canadian environmental nonprofit on behalf of all the citizens of Quebec under the age of 35. It challenges the Canadian government for insufficient action on climate change.

ENvironnement JEUnesse (ENJEU), a Quebec-based environmental education group recently announced  that it had applied for authorization for the class action suit. The law firm Trudel Johnston & Lespérance, which is representing ENJEU pro bono, filed the application in the Superior Court of Quebec. The application is the first step in a complex judicial process that may take several years to play out.

Like other climate cases targeting national governments, this one argues that the Canadian government’s greenhouse gas emission reduction targets are insufficient. Failing to take aggressive action to avoid catastrophic climate change, the complaint contends, violates the fundamental rights of young people under the Canadian Charter of Rights and Freedoms and the Quebec Charter of Rights and Freedoms. Both charters guarantee rights to life, inviolability and security, and the Quebec Charter establishes the right to live in a healthful environment.

That behavior includes continuing to support fossil fuel production and infrastructure despite stark scientific reports calling for an urgent transition away from coal, oil and gas to avoid the most devastating climate impacts. “Instead of accelerating a green transition, Canada is subsidizing oil companies and purchasing a pipeline in our name,” said Catherine Gauthier, executive director of ENJEU.

For the case to proceed beyond the initial stage, plaintiffs must demonstrate that they have a valid case: convincing a court that the allegations, if proven in a trial, would justify the conclusions being sought.

“We believe that we have a solid legal case that deserves to be brought before the courts,” Johnston said.

The suit seeks punitive damages and a court order forcing the government to cease interfering with the rights of young people.

ENJEU is following a successful example in the Netherlands, in which Dutch citizens won a landmark verdict requiring the government to reduce emissions at least 25 percent by 2020. An appeals court recently upheld the decision in Urgenda v. Netherlands, though the government has since announced it will appeal.

Another case succeeded in Colombia, where the Supreme Court of Justice ruled in favor of 25 young people who argued the Colombian government had violated their rights by permitting deforestation in the Amazon.

The U.S. also has a youth-led case currently pending, Juliana v. United States. That suit, which alleges violation of young people’s Constitutional rights, is currently on hold while the Ninth Circuit Court of Appeals decides on the latest extraordinary attempt by the Trump administration to stop the case before trial.

Like the Juliana plaintiffs, the young people in Quebec argue that climate change represents generational injustice.

“Experts are telling us that in 2030 we will experience the impacts of climate change more severely. In 2030, I’ll be 32. Maybe I’ll have one or two kids. What will their future be?” said 20-year-old David Morin, a student and vice president of policy and communications at ENJEU. “Delaying action will only make the consequences of climate change worse for me, my children, for all young people and future generations. It’s fundamentally unjust.”

“The government of Canada funds and protects an oil industry whose activities harm the environment and release greenhouse gasses,” added 17-year-old student Bernadette Veilleux-Trinh. “In this way, it is jeopardizing future generations’ ability to meet their needs and is contributing to the suffering of populations that are already experiencing the consequences of climate change. It’s time for my government to take responsibility and stop violating the rights of young people.”

A recent UN report, for example, singled out Canada for being nowhere close to its goal of 385 million tonnes of carbon dioxide equivalent per year — in 2016, its emissions were nearly double that.

“In 2030, I will be personally 41,” Gauthier told the Tyee. “So I’m really scared about the impacts of climate change I could be experiencing.”

Articles you may have missed…
Unprecedented Crime: Something Has Gone Awfully Wrong
Big Oil Contends Climate Change Is Our Fault