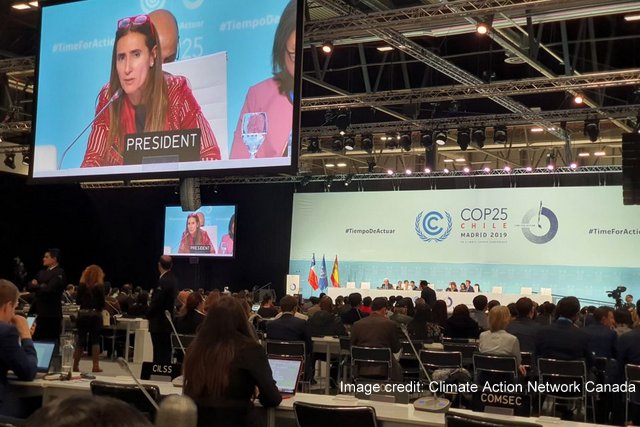 In The Big Stall, author Donald Gutstein shows how Big Oil owns the Paris Agreement. Quoting ecological economist Clive Spash, Gutstein points out that what came out of the Paris talks at COP21 “is a fantasy which lacks any plan of how to achieve the targets for emissions reduction.”

There are no mentions of greenhouse gas sources, not a single comment on fossil fuel use, nothing about how to stop the expansion of fracking, shale oil or explorations for gas and oil in the Arctic and Antarctic. Similarly there are no means for enforcement. — Donald Gutstein

According to Peter Carter, an IPCC expert reviewer, the recent COP25 climate talks showed once again that COPs are set up to fail.

“The COPs are set up for failure. We know for sure that the US, Russia, Kuwait and Saudi Arabia are blocking the science from the negotiations. And it seems that at #COP25 they are being dropped completely.”

The following is the statement from Catherine Abreu, Executive Director of Climate Action Canada (CAN) at the end of the COP25 climate talks in Madrid. It was first published on the CAN website.

You know something is broken when those demanding climate justice are pushed outside of the climate conference—as hundreds were—and those delaying climate action are allowed to stay inside.

These negotiations were supposed to deliver a clear, resounding call for more ambitious emissions targets and financing for climate vulnerable countries already experiencing the devastating impacts of the climate crisis. Negotiators were supposed to deliver strong rules for carbon markets that would uphold the environmental integrity of the Paris Agreement and safeguard human rights and the rights of Indigenous Peoples.

Instead, big polluters and the countries historically most responsible for the climate crisis have been able to ruthlessly advance the fossil fuel industry’s profit agenda over our collective futures – while those calling for justice have been sidelined and physically removed.

On every issue of significance, COP25 has delivered a mediocre or non -outcome that betrays the millions of people around the world calling for real climate action. While Canadian negotiators were largely constructive on the ground, Canada has a lot of work to do at home to address the gap between its climate goals and its ongoing commitment to expand the fossil fuel industry, which got a lot of international attention in Madrid. Minister Wilkinson must increase Canada’s climate finance contributions and deliver on his government’s election promise to bring a new, more ambitious Paris pledge to COP26 in 2020.

Statements from CAN members

The reaction from Climate Action Network members regarding the Conference of Parties (COP) process is not surprising given the disappointing results at COP25 during a year marked by widespread global climate strikes and rising public concern about the future of our world.

Tzeporah Berman, International Program Director, Stand.Earth
“The stakes couldn’t be higher. Millions are being displaced, thousands have died in heat waves, fires and floods already. Every day and every ton of carbon matters. The lack of ambition in Madrid will cost lives. It’s time to start listening to the people not the polluters.”

Dominique Souris, Executive Director, Youth Climate Lab
“COP25 made clear that the UN climate process – older than most of us at YCL – is not fit for purpose as it stands if it cannot galvanize the ambition needed to safeguard the futures of young people and generations to come. We won’t accept failure as an option. The young people of the world, especially Indigenous youth and others on the frontlines, are demonstrating what real ambition and action looks like. We demand leaders around the world follow suit.”

Dale Marshall, National Climate Program Manager, Environmental Defence Canada
“It wasn’t just that the COP25 outcome was a disaster. It was also demoralizing and enraging to see countries erase human rights and the rights of Indigenous Peoples, not only in the text but in reality, and erode the environmental integrity of the Paris Agreement. It will be up to people in Canada and around the world to continue to mobilize and push governments to take real climate action.”

Deputy Grand Chief Jordan Peterson of the Gwich’in Tribal Council and Chief Dana Tizya-Tramm of the Vuntut Gwitchin First Nation
“The truth and integrity from the land and the people will shake the foundations of corporate structures and international negotiations. It’s been made clear that there is no room for ethics in these international negotiations. The people need to carry the work that negotiators can’t. Guided by the Ni’inlii declaration we will continue to inform, educate and equip young Indigenous people to be leaders in climate action.”

Caroline Brouillette, Senior Researcher, Climate Change Policy, Équiterre
“We are nearing a tipping point. Citizen mobilization has become so strong that invested fossil fuel interests are getting worried and pushing back. They may have been able to slow down the progress here at COP, but the energy transition is inevitable. We all have to keep up the pressure at home.”

For those of us looking for a bright spot as we look ahead to COP26 to be held in Glasgow, Scotland in November of 2020, The Energy Mix reports that COP25 was the first to use ‘F Words’—fossil fuels—”to name and call out the major cause of the climate crisis, and of the chronic dysfunction in the hallways and backrooms of the COP itself.”

As recently as 2015, the Paris Agreement “ran 16 pages, but didn’t mention the words ‘fossil fuels’, ‘coal,’ ‘oil,’ or ‘gas’ once,” note Catherine Abreu, executive director of Climate Action Network-Canada, and Jamie Henn, co-founder and strategic communications director at 350.org. “That’s a striking omission considering the central role that fossil fuels play in contributing to the climate crisis….Since the “conference of the parties” began 25 years ago, fossil fuel industry lobbyists have had unfettered access to the process.”

That is why COPs have failed to curb global warming. And that is why we now have a climate emergency.

COP26 will take place in 11 months. And it too will also fail unless the fossil fuel industry is banned from the climate talks.

Related articles:
Where Was The Urgency At COP25?
The Only Thing More Disastrous Than COP25 Negotiations Is Global Climate
The Climate Solution Requires Going Into Emergency Mode