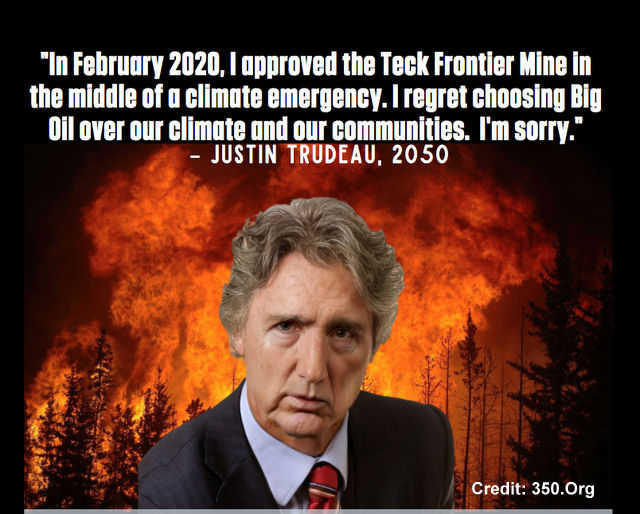 The climate crisis will not be solved by politicians. It will be solved by the millions of ordinary people around the globe who are rising up to seize power from the fossil fuel industry. In Canada thousands of us are putting it all out to remind Justin Trudeau and his cabinet of their pledge to net-zero by 2050—both an election promise and a commitment to the world at the recent COP26 climate talks in Madrid. Politicians who have moral courage and personal integrity should not need to be warned of the moral consequences of their decision on the Teck mine. Mr. Trudeau, imagine it’s 2050 and you made the right choice. (Below2C Editor)

This opinion piece by Cam Fenton was first published in The National Observer.

Imagine it’s 2050. The last three decades can only be described as climate chaos. It all started in 2020, when Prime Minister Justin Trudeau and his cabinet decided, despite declaring a climate emergency a year earlier, to approve the Teck Frontier oilsands mine — the largest project of its kind ever proposed. The mine tore up 29,000 hectares of pristine boreal forest and made it impossible for Canada — and the world — to avoid the worst impacts of the climate crisis.

When the mine opened in 2026, Teck started digging up 260,000 barrels of oil a day and dumping 6 million tonnes of CO2 into the atmosphere each year. It completely wiped out the carbon savings that the government earned when it planted 2 billion trees during Trudeau’s second term in office. And, while the mine helped put some people to work, it put Alberta on a pathway for the worst oil bust in the province’s history. As the world moved away from fossil fuels, thousands of workers in Alberta were left out in the cold as unemployment skyrocketed. The situation could’ve been curbed, but instead of helping working people, Premier Jason Kenney emptied the provincial coffers by giving massive handouts to Big Oil, propping up projects like the Teck mine.

Pouring fuel on the flames of the climate emergency

But that’s only part of the story. Before Teck was even operational, the writing was already on the wall. Just a few months after Trudeau’s cabinet greenlit the project, floodwaters raged across the Ottawa valley for the second year in a row. Thousands of people had to evacuate their homes, and when the waters finally subsided, many never returned, instead leaving the area in search of more stable ground. That summer, both B.C. and Alberta declared wildfire emergencies earlier than ever before. It was a harbinger of 2021 and 2022, when fires like the 2019 Australia blazes and 2018 California fires engulfed western and northern Canada.

In the midst of these disasters, Trudeau and his cabinet defended their decision to pour fuel on the flames of the climate emergency by approving the Teck Frontier mine. It did not go well for them.

Where’s the moral courage and integrity?

Stephen Guilbeault, up until then considered one of Quebec’s foremost environmentalists, watched his reputation and legacy go up in smoke. And at the COP26 United Nations Climate Summit, delegates from the Pacific Islands and from Indigenous communities around the world walked out of meetings with Environment Minister Jonathan Wilkinson to protest his government’s two-faced approach to climate change.

Things didn’t get better from there. As climate disasters compounded, so too did outrage over the gap between Trudeau’s words on climate change and his actions. On a trip through Western Canada, Trudeau and his Deputy PM Chrystia Freeland faced protests at every stop as firefighters, Indigenous peoples and local communities joined massive climate strikes, outraged that the government continued to push fossil fuel expansion in the midst of a crisis.

Freeland, once thought to be the next leader of the Liberal party, became so unpopular with young voters that she left politics before the next election. Trudeau’s legacy was forever tarnished, along with his cabinet, who were all swept out of office as new, young climate candidates rose to office.

Subsequent governments would try to right the ship, but Trudeau’s fossil fuel expansion agenda made the problem that much harder. And, for decades, the Teck mine approval would be remembered as the moment where we could have chosen a different path.

That path starts this month, with Trudeau and his cabinet rejecting the Teck Frontier mine. Instead of continuing to push fossil fuel expansion, they could go all in on a made-in-Canada Green New Deal. They could avoid setting Alberta workers up for the worst oil bust of all time, and could pass the most ambitious just transition act that the world has ever seen — something the Liberals promised during the 2019 election campaign.

They could put people to work building electric buses and trains, mass-producing renewable energy infrastructure and cleaning up abandoned and derelict oil wells. Instead of widening the already enormous gap between the ultra rich and the rest of us, they could create millions of good unionized jobs, expand universal social services and secure a healthier environment in the process.

Instead of shackling our politics with years of pipeline quagmires, our government could follow through on its promises to respect Indigenous rights and sovereignty. Government decisions could bring communities across Canada together to build a world-leading high speed rail network that moves people, not oil. And, when the fires and floods do come — brought on by the climate impacts we’ve already locked in — our government can rise to the challenge. By investing in resilient communities, it can ensure that Canada welcomes those impacted by climate change, both inside our borders and beyond, and doesn’t shy away from our global responsibility in the face of this crisis.

All this can happen, but not if we’re still building dangerous, unnecessary, climate wrecking projects like the Teck Frontier mine.

When you hear a fire drill, you call the fire department. You don’t call on Big Oil to deliver more fuel. — Below2C

Most industry supporters would have us believe that because Frontier Teck is a reputable and respected mining company and because the Teck proposal has been subjected to a comprehensive regulatory process, it should be approved by the Trudeau government. A recent opinion piece in the Edmonton Journal describes the noise surrounding Teck as  “disturbingly simplistic”. In fact Teck is a very simple decision. Canada declared a climate emergency last year. During a climate crisis, the environment must come first, every time. This is not a political decision. It a moral one.

You might like:
Choose Climate, Reject Teck. It’s A NO-Brainer
The Justin Trudeau Climate Playbook Version 2.0
It’s the 2020s And We’re In A Climate Emergency. OMG