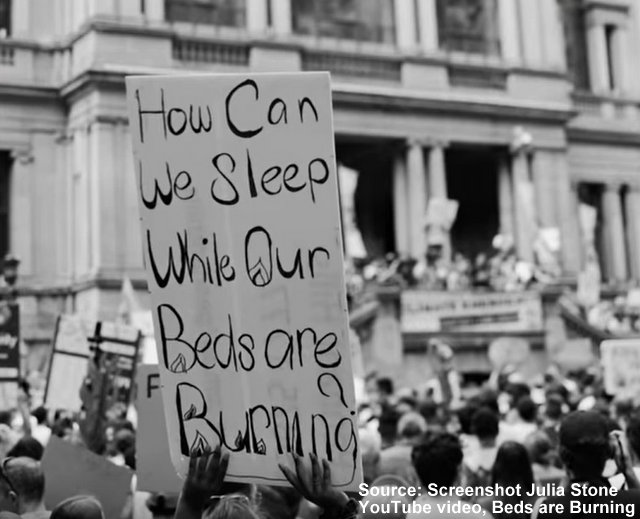 ‘Beds Are Burning’ is from the album ‘Songs For Australia‘. The album is a collection of songs recorded to bring global attention to the Australian wildfires among the worst ever on planet Earth.

Songs for Australia was recorded to raise money to help rebuild regions damaged during Australia’s worst ever wildfire season.

We are at a unique point in human history. Due to the scientific genius of men and women, we can either on the one hand improve the standard and quality of life of all mankind or we can destroy the planet as we know it. — Bob Hawke, former Prime Minister of Australia

At least 29 people died in the fires which destroyed about 2,500 homes.

Over a billion animals were impacted by the fires and approximately 30 percent of the koala population has perished.

The intensity and the extent of Australian fires were amplified by global warming. The world’s 5 hottest years ever recorded have occurred since 2015. And 2019 capped the hottest decade ever recorded according to NASA and NOAA. The estimated temperature increase was 1.1°C above pre-industrial records and 0.2°C warmer than 2011-2015 according to the World Meteorological Organization.

Australian authorities have finally announced that for the first time in more than 240 days there are no active bush fires burning in the hardest hit New South Wales region.

For the first time since early July 2019, there is currently no active bush or grass fires in #NSW. That’s more than 240 days of fire activity for the state. #nswfires #nswrfs pic.twitter.com/NpjF3lAHKa

Kelly Hayes is the host of Truthout’s podcast Movement Memos and a contributing writer at Truthout. During a recent conversation with a victim of and an organizer (Vanamali Hermans) during the  Australian wildfires, Kelly concluded that “clinging to normalcy is no longer an option.” And this goes for the coronavirus emergency as well, much like it did when Australia was burning. “We all have something to bring to the struggle and we all have to figure out how we’re going to do that… No one can do everything. As Mariame Kaba says, pick a lane and go.”

You may have missed these…
Music Is A Powerful Tool In The Fight For Our Climate
So How’s That Climate Emergency Thing Going?