We at the Citizens’ Climate Lobby Canada are in the business of creating political will for a livable planet with a laser-focus on carbon pricing, long considered the best tool to reduce carbon emissions. This work must not stop even during the pandemic now gripping the world.

Just because we’re in one crisis right now doesn’t mean we can forget about the other one — the climate crisis that we are also facing as a world and as a country. — Prime Minister Justin Trudeau

The good news is the Canadian parliament and 500 communities have declared climate emergencies.

The bad news is the most recent data show Canada’s greenhouse gas emissions (GHGs) rose by 15 megatonnes in 2018.

Before you start pointing fingers, please read on.

With the right policies, including a revenue-neutral carbon pricing policy as a core component of a cost-effective climate plan, Canada can exceed our climate targets, help save lives, improve health, conserve nature, promote equity and be poised to capture part of the 26 trillion dollar opportunity in climate-smart growth by 2030.

In 2018, Canada enacted the Greenhouse Gas Pollution Pricing Act. It establishes a minimum national cost for GHG emissions. First, it places a charge on specified GHG-producing fuels (the Fuel Charge). Second, it establishes a carbon pricing system applicable to large industrial emitters of GHGs, which pay a carbon price if their emissions exceed a set level.

The bulk of the fees collected under the Fuel Charge are returned to households, and 80% of households come out ahead, a finding confirmed by the Parliamentary Budget Office and others.

But unfortunately, the federal government is facing strong headwinds against them when trying to enact evidence-based climate policies

What happened in Ontario?

Ontario is responsible for 10 of Canada’s 15 megatonne rise in GHG emissions in 2018.

In 2018, the Ford Government unlawfully passed the Cap and Trade Cancellation Act which rolled back the province’s relatively progressive climate targets, replacing them with a significantly weaker 2030 target. Unfortunately,  Alberta, Saskatchewan, and Ontario all have filed challenges to the Greenhouse Gas Pollution Pricing Act and we await the rulings of the Supreme Court of Canada for those cases.

Their actions go against mountains of research.

Specifically, 27 Nobel Prize-winning economists and thousands of economists worldwide support carbon pricing similar to what we now have in Canada with a few tweaks.

Economic modeling, that you can test yourself at Climate Interactive and the Pembina Insititute, both show that carbon pricing is a core component of a cost-effective climate plan.

What specifically is needed for Canada’s carbon pricing policy to avert climate disaster?

But Carbon Pricing Is Not Enough

Also, in addition to carbon pricing, we need a suite of complementary climate policies to make sure the transition to a low carbon economy over the next 20 years is fair and equitable.

We are in a climate emergency.  We must use evidence and empower our politicians to listen to the experts and cooperate for the climate crisis as they have done so remarkably well for the COVID pandemic.

This is where Citizens’ Climate Lobby contributes, to aid the timely implementation of strong policies.

For detailed information about our request please read our 2020 Carbon Pricing Guidelines.

Please join us at our online Spring Rendezvous on Monday, May 11, 2020, where the top-minds and best volunteers on the planet will gather to help build political will for a liveable world.  Registration closes May 8. 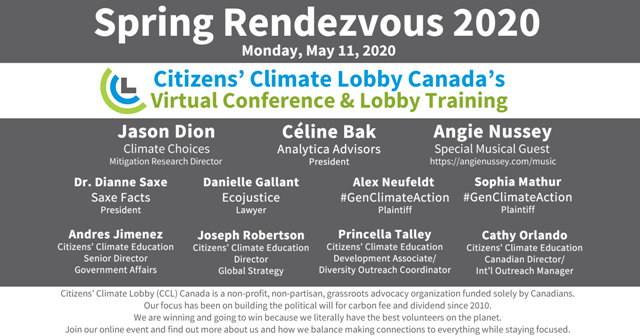 Note: The content of this piece is sourced from a Press Release issued by Citizens’ Climate Lobby on Earth Day.

Scotland’s renewable projects to speed the country out of crisis