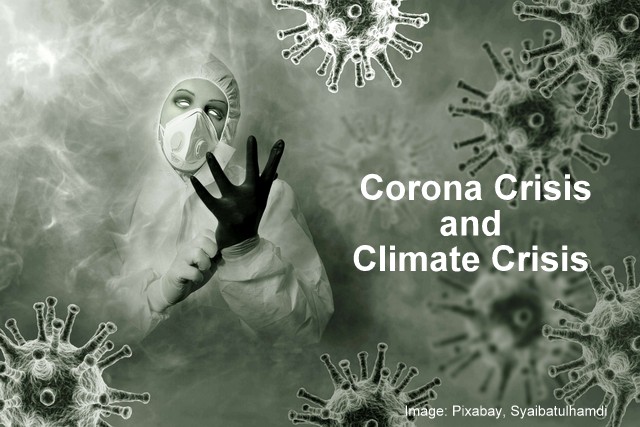 “Delay is the deadliest form of denial,” once said C. Northcote Parkinson. And “Most men would rather deny a hard truth than face it,” according to George R.R. Martin ( A Game of Thrones). And as the world struggles with two crises—corona and climate— denial is pervasive and wall-to-wall in the present White House.

Arno Kopecky’s recent Globe and Mail op-ed shows that, in some circles, pandemic denial and climate denial are one and the same. The world is exposed to a daily dose of denial, misinformation, mistrust of science, exaggeration, finger-pointing and plainly bizarre behaviour from the so-called leader of the free world.

This is how it plays out:

(For enhanced performativity, spread blame as widely as possible throughout steps 1-3.)

It’s an old recipe, with many regional variations, but there you have the essence of a certain brand of crisis management that has, inevitably, reached its apotheosis under the reality-tv President in this time of COVID-19. Because of course the man who ignored the first seventy days of shrill warnings from the finest intelligence and medical communities on earth, who as late as February 28th dismissed the pandemic as the Democrats’ “new hoax,” would complain just six weeks later that “the media minimized this from the start.”

Of course he would also blame the World Health Organization for “severely mismanaging” the crisis, withdraw US funding from the organization, and demand that his name be printed on the $1200 cheques being sent out to Americans.

Of course his shifting signals would be boosted by otherwise intelligent men and women. That lengthy list is arguably topped by America’s Surgeon General, Jerome Adams, who by March 1st still had it in him to say “more people are going to die by far from the flu than from coronavirus,” only to declare on April 5th that “this is our Pearl Harbor.”

By then, the official analogy had been established: “The world is at war with a hidden enemy,” Trump tweeted on March 17th. “WE WILL WIN!”

And of course he would declare victory just one month later, against all evidence to the contrary, urging his country to re-open and inciting the citizens of certain Democrat-held states to “liberate” themselves from those governors who wanted to maintain a lock-down.

Shocking but not at all surprising, to borrow the Russian-American journalist Masha Gessen’s perfect description of America’s presidency. It’s happened before. More importantly, it’ll happen again, and we should be ready when it does. Because, of course, there are other invisible enemies.

Chief among them is carbon dioxide. Trump famously called climate change a hoax, too – a Chinese one at that – and although he may never come round to declaring war on carbon, eventually the Republican party and other deniers-in-chief around the world will have to. They’ll do it because for the same reason he did: Because “denial is not likely to be a successful strategy for survival,” as a GOP pollster wrote in a memo that reportedly helped change Trump’s  thinking, however briefly, on COVID-19. Republicans, that memo explained, were far more likely to ignore social distancing guidelines than Democrats.

When the world’s myriad deniers and downplayers of climate change come to the same conclusion, it’s a safe bet many will look to the above recipe not just to maintain their power, but ideally to increase it. That is, having ignored the terrifying accumulation of warmth in our atmosphere for their entire careers, they will suddenly claim to have discovered it, and in the same breath demand the very dictatorial powers they’ve long accused us eco-radicals of coveting.

The worst-case scenario comes not from the US but from Hungary, whose president Viktor (“the Viktator”) Orban saw the opportunity of this pandemic from day one, and used it to seize what Trump can so far only speak of longingly: “Total authority.” (To be fair, Orban has a long head start in this pursuit).

Here in Canada, we’ve been blessed with a progressive, collaborative response to COVID-19. And the federal government’s decision to devote the majority of its aid package to the oil and gas sector to cleaning up orphan wells, accompanied by Trudeau’s insistence that “just because we’re in a health crisis doesn’t mean we can neglect the environmental crisis,” astonished and delighted many in the environmental community. Still, it’s early days. And when it comes to climate change, a plurality of our citizens still vote for provincial and federal leaders who talk about carbon dioxide concentration’s ever-steepening curve the way Trump so recently talked about this pandemic. As someone else’s problem.

Take Peter Mackay, frontrunner for the Conservative party’s leadership and so the likeliest person to become Canada’s next Prime Minister. “We’re not the problem,” he recently told a gathering of Progressive Conservatives in Nova Scotia with respect to carbon emissions. “We can throw all our car keys in Halifax harbour, turn down the heat, turn off the lights, walk around naked in the dark eating organic beets and it won’t make a difference.”

In a colorfully myopic sort of way, Mackay is correct. Canadians can’t stop climate change alone. Shutting down the oil sands tomorrow would not slow the pace at which our glaciers and permafrost melt.

But in making this point, Mackay misses it completely.The proper formulation is that stopping climate change will require the whole world’s participation. Not only is Canada not exempt – if the world’s fourth largest producer of oil and gas doesn’t have a role to play, then who does?

True, Canadians have more power to stop a pandemic than we do to stop climate change. Foresight and discipline are already bending this virus’ curve. But climate change shatters the illusion that any country can wall itself off from the rest of the world; it proves what another Canadian said long ago, that nations are mere neighborhoods in a global village.

Cherish those who seek the truth but beware of those who find it. — Voltaire

Considered from that scale, the same logic of universal cooperation applies to climate change and pandemics alike: No single community can solve the problem, but any one of us can impede the solution. And as with the novel coronavirus, the longer you wait to acknowledge climate change the harder it is to defeat; the more tempted leaders will be to overreact, seize absolute authority, declare wars both real and metaphorical.

“This pandemic is not a war,” said Frank-Walter Steinmeier, the President of Germany, warning against the path that kind of analogy leads down. “It does not pit nations against nations, or soldiers against soldiers…instead, it is a test of our humanity.”

The same is true of climate change. This pandemic is reminding us that it’s never too late for a villain to present himself as a savior, one who can make the problem go away in exchange for absolute power. When that happens, let’s return the gift they’ve lavished on us so freely: Denial.

ICYMI:
Earth Is Telling Us That We’re In Serious Overshoot
A World With Ten Billion People Does Not Turn Out Well