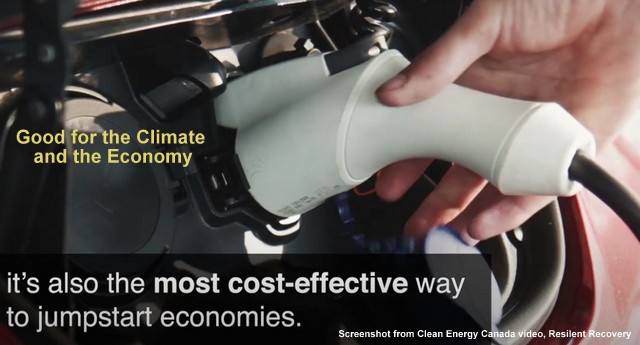 A recent analysis by CBC News shows the delicate balancing act facing the Canadian government as the economy begins to reopen and find its new normal. There’s a very strong advocacy for a green recovery both in Canada and internationally but the pull from the business-as-usual economy is equally strong.

The Energy Mix reports that “the overall trend is…there is more money going into fossil fuels than into clean energy,” Ivetta Gerasimchuk, IISD’s sustainable energy supplies lead, told a recent webinar hosted by the Stockholm Environment Institute (SEI). “What we see is pretty much what countries did before the COVID crisis, they keep doing. In this sense the crisis…has just exacerbated the trends we had before, unfortunately.”

Good for the Climate

“Climate change is perhaps the greatest threat of our lifetimes, and that would be reason enough to ensure our recovery efforts are also helping us combat it. But it’s not even the only reason. Technology has evolved. Values have evolved. And our global economy has evolved with them.”

You may have missed it, but an interesting evolution happened here in Canada over the past two months: the country’s clean energy sector, which employs 298,000 Canadians, rallied together as it has never rallied before.

Canada’s clean energy sector has long been especially quiet compared to its fossil fuel counterpart. Unlike in oil and gas, clean energy jobs are not regionally centralized, most companies are relatively small, and industry associations are numerous. Wind power, solar power, electric vehicles, biofuels, cleantech, hydro: there’s an industry association for each of them.

Indeed, it speaks to one of the fundamental strengths of clean energy – just how diverse it is. And on the other hand, this same fragmentation is why the sector struggles to make itself heard.

But that changed this year. In the wake of COVID-19 lockdowns, over 360 signatories representing more than 2,100 companies—mostly in the clean energy sector—came together around a shared vision for Canada’s economic recovery. They asked for clean stimulus measures and a commitment to maintain and build on Canada’s climate efforts, key ingredients for a resilient recovery.

Good for the Economy

In short, the sector found its voice. And you should hear them out, because their argument may be more compelling than you think. While the idea of a clean (or green) recovery has made the news rounds in recent weeks, less covered were a number of new reports that together draw the same conclusion – that clean stimulus isn’t idealistic, it’s good economic policy.

For starters, consider that over the first four months of 2020, clean energy stocks actually grew 2.2 per cent, while fossil fuel stocks plummeted 40.5 per cent. That’s according to researchers from Imperial College London and the International Energy Agency, who also discovered that “publicly traded renewable power portfolios have posted significantly higher returns for investors and lower volatility over fossil fuels during the past 10 years.”

The picture in Canada tells a similar story. As of June 15, the TSX Renewable and Clean Tech Index had grown 77 per cent over the past decade, while the TSX Energy Capped Index (essentially, oil and gas) had fallen 71 per cent.

Perhaps this next one won’t come as a surprise. Compared to funding for fossil fuels, clean stimulus creates nearly three times as many jobs for every $10 million invested by governments, according to McKinsey. Another recent study from U.S. and U.K. economists found that clean stimulus policies have historically been the most cost-effective way to jumpstart economies—and would likely be so now.

Clean Energy Canada’s own research has estimated that, here in Canada, where 50,000 jobs could be lost in fossil fuels over the next decade, over 160,000 will be created in clean energy. This would mean a net increase in energy jobs — driven in part, it should be noted, by current climate policy.

But despite these better returns, the International Energy Agency’s analysis also found that the clean energy sector has struggled to receive the significant investments the fossil fuel sector has benefited from.

Opportunity to do both: climate and economics

And therein lies the opportunity as we map out where we, as a country, choose to invest.

This is an opportunity to not only combat climate change and safeguard our way of life but strengthen our economy, create jobs and secure new areas of advantage. Why should we fall behind Germany, whose newly unveiled €130-billion recovery fund will devote 30 per cent of spending to climate solutions?

While some have questioned the need for clean stimulus—or recovery spending at all—there are compelling reasons to believe that economic recovery is likely a long road ahead, partly because of the global nature of the pandemic (Canada’s economy is not an island) and partly because without a vaccine, our dance with COVID-19 will drag on, as will the measures to keep it under control.

Climate change is perhaps the greatest threat of our lifetimes, and that would be reason enough to ensure our recovery efforts are also helping us combat it. But it’s not even the only reason. Technology has evolved. Values have evolved. And our global economy has evolved with them.

This isn’t just about the future that awaits. It’s also about keeping up with the present. Clean energy is no longer the idealistic path for Canada. In 2020, it’s the realistic one.

Related articles:
Only Clean Technologies Can Stop Climate Change
Industrial Age of Energy and Transportation Over by 2030