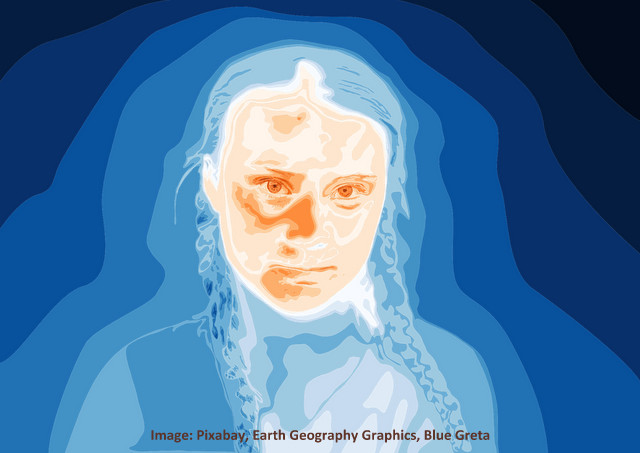 Commenting about her time in New York in September of 2019, Greta Thunberg was not shaken by the media attention she generated. “I see myself everywhere. Just the night before one of my speeches had been projected onto the facade of the UN building. But luckily I completely lack an interest in such things. If you would care about this kind of attention, then you’d probably develop a self-image that is far from sane,” observed Greta.

This post consists of excerpts from the transcript of a radio program—subsequently adapted to an essay format—which traces the movement of Greta Thunberg from her arrival in New York city in September 2019.

At the United Nations

In the greenroom, sitting with the other speakers, I try to read through my speech, but I constantly get interrupted by people who want to do small talk and take selfies.

Presidents, prime ministers, kings, and princesses, all come up to me to chat. People recognize me and suddenly see their opportunity to get a selfie which later they can post on their Instagram – with the caption #savetheplanet. Perhaps it makes them forget the shame of their generation letting all future generations down. I guess maybe it helps them to sleep at night.

On the subway home [after the speech] I see that many in the car around me are watching the speech on their phones. Some come forward to congratulate me. Someone suggests that we should celebrate. But I don’t understand what their congratulations are for, and I understand even less what we’re supposed to be celebrating.

Yet another meeting is over. And all that is left are empty words.

I urge them to listen to the science and act now before it’s too late. They say that they think it’s so amazing that I’m so active and committed, and that when I grow up I too can become a politician and make a real difference in the world. I then explain that when I’ve grown up and finished my education it will be too late to act if we are to stay below the 1.5°C – or even 2°C – target. After that I talk through some of the figures and numbers from the Intergovernmental Panel on Climate Change (IPCC) 1.5°C report. Then they laugh nervously and start talking about something else.

Listen to the Scientists

So where do we start? Well I’d suggest that we do precisely what all the world’s governments have committed to do in the Paris Agreement. Which is to follow the current best available science.

That is the equivalent of less than 7.5 years of today’s ‘business as usual’ emissions until that budget completely runs out. This is the carbon budget which gives us the best odds to achieve the 1.5° target. Yes, you heard it right, less than 7.5 years.

There’s no time to waste. Time for our politicians to #ActOnClimate.#Climate #energy #GreenNewDeal #ClimateStrike pic.twitter.com/eMDbudo6nc

We therefore must learn to read between the lines. Just like in any other emergency.

And the fact that the responsibility to communicate them [climate warnings] falls on me and other children should be seen for exactly what it is – a failure beyond all imagination.

Tar Sands: The only place that anyone has ever discouraged me from visiting is Alberta, Canada. The state of Alberta is one of the western world’s largest oil producers and its main claim to fame is probably being home to the tar sands. The tar sands are an area bigger than the whole of England where oil companies have spent the last 60 years extracting oil straight from the soil. A process with a enormous ecological footprint.

Alberta has a very powerful and highly criticized oil lobby that is well known for its harsh methods to silence anyone they consider a threat to their industry. And I’m definitely considered a threat to them.

Pine Beetle: Magnificent pine forests stretching out as far as the eye can see. It reminds me of home. Except for the fact that many trees here aren’t green, their needles are either brown or have been lost entirely…But in the last few decades this area has seen a significant level of heating. Canada – as well as other countries close to the poles – has seen a rate of warming about twice as fast as the rest of the world…And since the local ecosystem completely lacks the ability to adjust to the new reality, the consequences become extremely visible.

Athabasca Glacier: Due to global heating the Athabasca glacier has, in the last 125 years, retreated 1.5 km and lost half its volume. According to the latest estimates, it’s currently withdrawing 5 metres every year…I ask whether this glacier can be saved or not. He [glaciologist John Pomeroy] shakes his head…“No, this one has already passed its tipping point and there’s nothing we can do. We estimate that it – along with countless other glaciers – will be gone completely within this century. 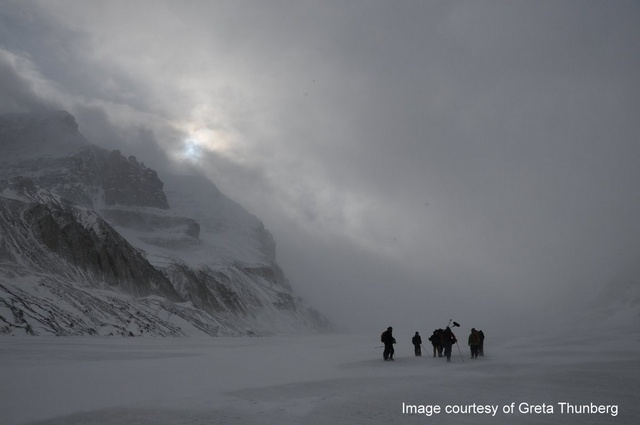 So, in short: the temperature increases, the damaging mountain pine beetle survives the winter and dramatically increases in population. The trees die and turn into wildfire fuel which intensifies the wildfires even further. The soot from those fires makes the surface of the glaciers turn darker and the melting process speeds up even faster…This is a textbook example of a reinforcing chain reaction.

Greta Back In Sweden

In Sweden we live our lives as if we had 4.2 planet earths. Our annual carbon footprint is approximately 11 tonnes of CO2 per person, if we include consumption. That can be compared to India’s 1.7 tonnes per capita. Or Kenya’s 0.3 tonnes. On average the CO2 emissions from one single Swede annually is the equivalent of 110 people from Mali in West Africa.

Year after year people in power are allowed to appear in the media unchallenged and claim that Sweden’s emissions of greenhouse gases have decreased 20-30% since 1990. But the truth is that they haven’t decreased at all, if you include consumption and international aviation and shipping. And obviously the statistics will look much better if you simply choose not to count everything.

People do not understand enough about the climate

My experience however is that people understand much less about the climate crisis than you’d think. If there’s anything I’ve learnt from traveling around the world it is that the level of knowledge and awareness is close to nonexistent…because the general level of public awareness is so low you can still get away with anything. No one is held accountable. It’s like a game. Whoever is best at packaging and selling their message wins. And since the truth is uncomfortable, unpopular and unprofitable, the truth doesn’t stand much of a chance.

I’ve met many of the most powerful people in the world. And even among them pretty much everyone lacks even some of the most basic knowledge. So if people are not aware, who is guilty for the message not getting through?

The only way is to treat the climate crisis like you would treat any other crisis. To come together, gather all the experts, put other things aside and adapt to the new reality. To act as quickly and strongly as the situation allows.

So what should we do to avoid a climate disaster beyond human control?..That is the question of our time. It is being asked by people all across the political spectrum from all over the world.

But what if the question to a great extent has been phrased the wrong way? What if it should rather be “what should we stop doing to avoid a climate disaster”?

Doing our best is no longer good enough. We must now do the seemingly impossible. And that is up to you and me. Because no one else will do it for us.