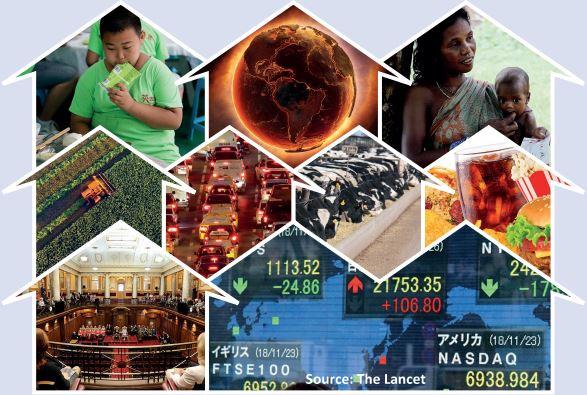 “It’s not possible to frame either climate change or COVID-19 as crises that somehow stand alone or are separate from existing, overlapping layers of systemic problems…In this sense, the term “syndemic” is instructive because it can provide lessons for how we should rethink approaches to climate change.

(This article is sourced from Policy Options and authored by Candis Callison.)

Living through a pandemic is changing what it means to declare a state of global crisis. It’s now abundantly clear that people experience crises unevenly and differently depending on factors like geography, history, race, age and access to decision-making and resources that affect one’s well-being. There are also lessons here for another global crisis: climate change.

Although the climate movement has long used urgent language to describe the crisis in public, recent discourse about the coronavirus has been more effective at conveying what it means to think globally and act locally.

As many Indigenous scholars, activists, and leaders have argued, it’s not possible to frame either climate change or COVID-19 as crises that somehow stand alone or are separate from existing, overlapping layers of systemic problems rooted in colonial histories and structures. In this sense, the term “syndemic” is instructive because it can provide lessons for how we should rethink approaches to climate change.

Over the past three decades, there have been enormous challenges when it comes to communicating the urgency of scientific findings related to climate change, and engaging the public on those findings. The Intergovernmental Panel on Climate Change (IPCC)’s 2018 report, “Global Warming of 1.5 ºC,” is perhaps the boldest example of this approach for global audiences, setting climate change not only within a framework of urgency and crisis, but also giving it a countdown clock.

We’re now over two years into the 12-year window during which it’s essential that humanity take action to slow climate change, so we can prevent the earth from reaching two degrees above pre-industrial levels of warming. At two degrees, there are a range of predicted catastrophes that could impact every corner of the globe, both directly and indirectly. Global temperatures are already projected to increase by 1.5 degrees between 2030 and 2052, according to the IPCC, and “far-reaching transitions in energy, land, urban and infrastructure (including transport and buildings), and industrial systems” are necessary to avoid further increases.

From changes to glaciers and polar sea ice to massive wildfires in Australia and North America, there are many examples of just how impactful climate events can be. For those of us along the west coast, wildfires became part of living through the ongoing pandemic. This summer, wearing a mask meant protecting yourself from both COVID-19 and thick ashy winds that made the air dangerous to breathe.

Our social lives as Indigenous people include our relations with non-humans, and we – both humans and non-humans – have all been impacted by colonialism and its deeply intertwined compatriots, industrialization and capitalism.

The inescapably personal nature of the pandemic and its safety measures, such as wearing a mask, are reshaping how we think not only about our connectedness to each other but also to the non-human world of which we are but one part. For Indigenous communities like my own, this isn’t necessarily a new way of thinking about the world. I often quote my fellow Tahltan Curtis Rattray who says, “We don’t have an environmental problem. We have a social one.”

Scientists are only beginning to scratch the surface when it comes to measuring just how much colonialism has impacted the climate historically. A 2019 study estimated that 56 million Indigenous people were killed between 1492 and 1600 – some of them from new diseases and epidemics, it’s worth noting – in South, Central and North America. This caused massive changes to the global climate and to lands throughout the Americas. As Mark Trahant, the editor of Indian Country Today, put it, the study “adds hard data” that documents “the global cost of colonialism.” These consequences are already well known to diverse Indigenous communities that still contend with the aftermath of colonial histories, which have violently disrupted human and non-human relations and lives.

The term syndemic explains how a pandemic like COVID-19 “clusters with pre-existing conditions, interacts with them, and is driven by larger political, economic, and social factors,” according to Emily Mendenhall, a public health professor at Georgetown University who has written extensively about syndemics. In the U.S., Mendenhall says, “political failures have driven COVID-19 morbidity and mortality, and this cannot be divorced from our historical legacy of systemic racism or our crisis of political leadership.”

The coronavirus, she argues, is not syndemic in countries like New Zealand because of the response of its political leaders who have decisively moved into lockdowns, developed clear communication strategies and provided financial and other kinds of support that emphasize collectivity.

In many ways, the syndemic concept offers a tool for diagnosing how power operates in societies, as well as the kinds of resources that are available for politically marginalized, economically disadvantaged and racialized communities, to address health disparities. Death and infection rates, as well as vaccination rollouts, offer a few avenues for assessment.

But what about access to clean water or non-racist emergency health care? If basic public health services are inaccessible or unreliable, what kind of crisis is this pandemic and for whom is it a markedly different experience? It’s certainly not the only or first crisis many Indigenous communities are facing. In most, if not all cases, the pandemic amplifies underlying conditions that already form layers of crises stemming from institutions, structures and systems that were not set up to serve – and continue to be challenged to serve – Indigenous people and other racialized communities.

Indigenous communities have been asking these same kinds of questions about climate change for the last few decades. There is no term like syndemic to call attention to the ways in which climate change and potential avenues for action are intertwined with existing crises that emanate from ongoing colonial systems and structures. The actions that need to be taken don’t only involve an assessment of potential and probable futures in a climate changed world, but also clarity about how we got here, which communities are most impacted by climate change, and who gets to make decisions that determine the near and farther future.

In Australia and the west coast of North America, where major wildfires have been hugely destructive and increasingly frequent, Indigenous burning practices have recently attracted a lot of media attention as an alternative to colonial management practices that’ve been outpaced by wildfire conditions and climatic changes. In California, there’s emerging recognition that major wildfires could be tempered by Indigenous burning practices. In Australia, after much success and widespread acknowledgement of Indigenous fire knowledge, there’ve been calls for a national Indigenous burning program. The underlying questions, however, are still about who has the power to decide and how to think about the past and the present.

Climate change as a layer looks different depending on which diverse Indigenous contexts one considers, and what avenues there are for Indigenous practices, governance and relations to take precedence.

Questions about transforming infrastructure are also questions about what is considered infrastructure. As Kukpi7 Ron Ignace of Skeetchestn Indian Band said to The Narwhal, the community’s reforestation efforts are about building resilience and biodiversity, as well as engaging in cultural burning practices. Many of these values and practices were displaced as early as the 1870s with colonial land management policies that included indiscriminately putting out all fires, clear-cut logging that was replaced by much less diverse, younger forests and fines for the use of Indigenous burning practices. For Ignace, transformation is rooted in thinking about forests in a “different way” as “living infrastructure.”

Like the pandemic, climate change is a global and diffuse, yet distinctly local experience requiring a clear-eyed assessment of the future that grapples with a colonial, unequal present and past in ways that haven’t yet been done in Canada or anywhere else in the world.

This article is part of the Identifying the Barriers to Racial Equality in Canada special feature.