Below 2C
Home Climate Climate Action Youth To The World – Act On Your Promises and No More... 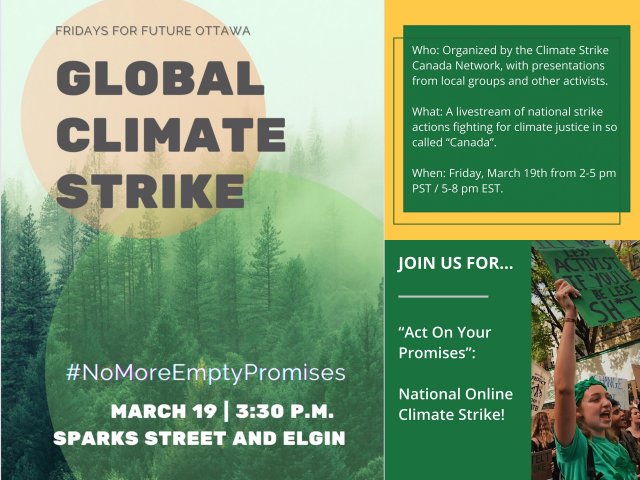 On March 19th, youth globally and across Canada are taking action telling the world “no more empty promises”. They’re calling on governments, pillars of the fossil fuel industry, banks, and insurance companies to #ActOnYourPromises and #NoMoreEmptyPromises.

Youth to the World: Act on your Promises

Those in power continue to only deliver vague and empty promises for far off dates that are much too late. What we need are not meaningless goals for 2050 or net-zero targets full of loopholes, but concrete and immediate action in-line with science. Our carbon budget is running out. The climate crisis is already here and will only get worse. To avoid the worst case scenarios, we must have annual, short-term climate binding targets that factor in justice and equity. Where are the climate leaders Canada so desperately needs?

As the world gets hotter and hotter by the year, we must treat the climate and ecological emergency like an emergency — which means immediate action and #NoMoreEmptyPromises from our world leaders.

End all investments in fossil fuel exploration and extraction.

Governments, financial institutions, and companies must immediately end fossil fuel subsidies and immediately and completely divest from fossil fuels. Moratoria on all new fossil fuel projects should be imposed worldwide.

Real carbon budgets based on science and the IPCC scenario that gives us a 66% chance of limiting global heating to below 1.5°C must be strictly adhered to. These budgets must take into consideration the common but differentiated responsibility among countries in the Global North and the most affected peoples and areas, and must not be reliant on possible future and unknown negative emissions technologies.

Design climate policies that consider the welfare of workers and the most vulnerable in society.

Policies must incorporate aspects of economic, racial, and gender justice as they work to address the climate emergency. Justice for environmental defenders must especially be considered given the repression they have faced for protecting our planet. No one should be left behind.

The ongoing democratization of action on climate must be facilitated by governments by providing spaces for and repealing laws that limit citizen participation in climate decision-making. Governments should recognize the importance of the involvement of civil society in the resolution of the climate crisis, and should be open to suggestions and criticism from their constituents. Voices of environmental defenders, farmers, fisherfolk, and indigenous communities, must especially be listened to, valued, and prioritized.

We are now witnessing the disastrous effects of massive over-extraction and subsequent degradation of nature on humanity and the planet. Any and all individuals and institutions complicit in the massive, large scale destruction of our planet must be held accountable for their actions.

Note: The current list is a work in progress. National/local groups and other sectors of society can suggest modifications to improve and add to the list. In Canada for example, the March 19 climate strike could also raise questions about Bill C-12: Canadian Net-Zero Emissions Accountability Act currently in second reading, Indigenous reconciliation and climate justice, the national carbon pricing program, the transition to clean energy. And of course, local campaigns could readily determine specific targets relevant to their own local campaigns.

PLease make sure to register your climate strike on the Fridays for Future Map.

Climate Strike Canada will be hosting a livestream from 5-8 pm EST / 2-5 pm PST on March 19th to hear from grassroots groups and frontline activists about the future of climate justice. Click the link to register!