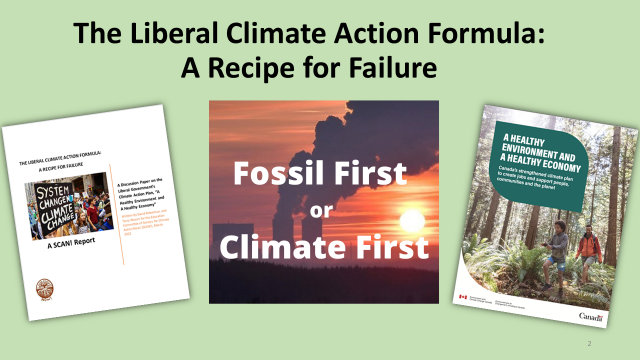 In her recent Earth Day address, Greta Thunberg accuses world leaders of surrendering on the 1.5°C target when they present very insufficient emissions targets that fall far short of  what the available science says is required. “You clearly see there’s a gap,” says Greta. “As it is now, world leaders get away with it since the gap of awareness is so immense. And this is the heart of the problem.” Canada’s Justin Trudeau is one of those leaders who has surrendered by presenting a climate plan which is fossil first, not climate first.

Fossil First or Climate First: You Can’t Do Both

(This post was previously published in rabble by Kathleen O’Hara)

Bring on the old folks! Youthful climate activists filled streets around the world in 2019. But once all of us were hunkered down due to COVID-19, it was time for the wisdom of our retired citizens to rise up.

After hours of thorough research, longtime progressives Terry Moore and David Robertson have exposed the weaknesses — even the dangers — of the federal government’s December climate plan. In doing so, these outspoken elders run counter to what they label “a chorus of congratulations from a number of big green organizations.”

The two accept that the Liberals have put forward “some useful initiatives, hopeful promises, encouraging developments,” but the scope, scale and timing are often inadequate. Their central critique is that “the government has adopted a ‘fossil first’ climate action plan instead of a ‘climate first’ approach.” You wonder why any green groups are onside.

There is no mention of a crisis or emergency

Moore and Robertson maintain that the “overarching goal” of the climate plan is “as much about capturing economic advantage as it is responding to the challenges of global warming.” Rather than regulating and requiring dramatic reductions in emissions, the Liberals want to “incentivize, challenge, encourage, and invite industry to act differently.” There is no mention of a crisis or emergency.

Even the government’s most prominent climate programs — home energy retrofits, tree planting, and zero-emission vehicles — “suffer from poor design, inadequate funding, targets that are not ambitious enough, and a failure to link climate programs to expected emission reduction outcomes.”

At the same time, the authors note that there are only indirect and very modest investments — especially compared to the Trans Mountain pipeline — for the further development and expansion of wind energy and solar power which make up a scandalously small portion of Canada’s energy supply.

Carbon pricing won’t achieve its emission targets, Moore and Robertson state. And the introduction of complicated rules about emission intensity rather than emissions reductions along with complex carbon credits and offsets make it possible for big emitters to “game the system.”

The Liberals are also relying on “future-tense” technologies, including their national strategy to become a natural-gas (rather than green) hydrogen superpower, with its accompanying need to spend public money to capture, transport, and safely store millions of tonnes of carbon underground.

Then, incredibly, there’s nuclear. The Liberals have a small modular reactor (SMR) action plan. They seem to have forgotten safety concerns and long-term, radioactive-waste storage problems. Again, write Moore and Robertson, the government will use our tax dollars to fund a questionable technology.

The numbers in the climate plan are “problematic”

Somehow, the Liberals claim that Canada will not only achieve its Paris commitments — the feeble Harper-era 30 per cent reduction in emissions by 2030 over the base year of 2005 — but will actually surpass them. The intrepid seniors have their doubts. In fact, they claim that the numbers in the climate plan are “problematic.”

The government’s emissions cuts so far have been based on phasing out coal-fired electricity, but there is another area they’re depending on — land use, land-use change and forestry cuts. According to our wise analysts, the forecasted cuts are “made up.” They don’t even take account of forestry emissions, due to fires and increasing tree diseases.

SCAN! also takes aim at Bill C-12, the Net-Zero Emissions Accountability Act, now stalled in the House of Commons. Quite rightly, they point out that it:

“[f]ails to hold the government accountable for setting and achieving climate targets in a transparent and timely manner. By the time the first audit is released … in 2029, it will be too late to make any adjustments required to meet our Paris commitments.”

The SCAN! exposé is timely. Certain fortunate Canadians now have a better grasp of the Liberal mindset and planning as it introduces its first budget in two years this week.

As recent guests on the Time4Action webinar series, Moore and Robertson were able to call on Canadians to protest the overarching fossil-first bent of the Liberal Climate Plan. You can view the video here.

To view the entire webinar series, click on the image above.