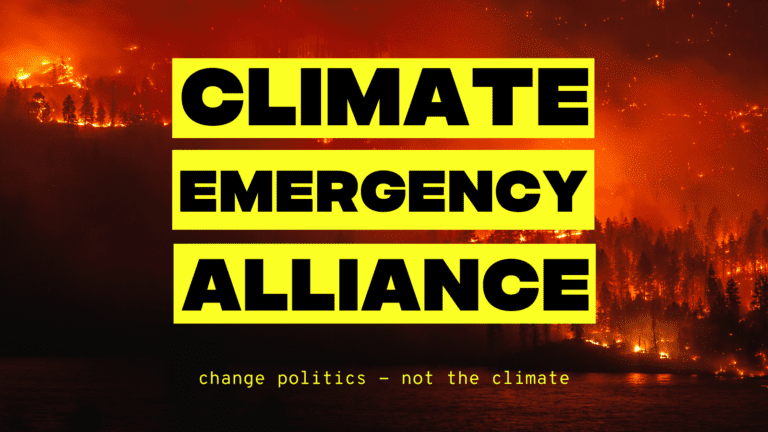 When the next federal election is called—expected anytime during the next six months—climate change will be the top issue right after COVID. And Canadians will have to choose between climate delay (the Liberals) or climate denial (the Conservatives). Unfortunately, neither the NDP nor the Greens have any chance of electing enough Members of Parliament to form the next government. However, an NDP-Green Alliance could.

The Liberal climate plan is more about an energy strategy that favours Tar Sands expansion—spearheaded by a pipeline-buying-oil-sector-boosting prime minister—than it is about reducing emissions. And the Conservative climate plan is one that just suddenly surfaced as damage control after Conservative party members voted down a resolution that would officially recognize that climate change is real.

We Have a Climate Emergency

According to the world’s best scientists, we have less than a decade to tackle the climate emergency. Yet, despite lofty promises from Justin Trudeau, Canada’s emissions continue to rise. If we continue on this track, we’ll lock in devastating wildfires, more extreme weather, costly economic impacts and much worse. We’re in a climate emergency but our government continues to act as if we have decades to solve this problem. With an election on the horizon, it’s clear that we can’t afford four more years of this approach.

Facing a climate emergency, Trudeau has failed to reduce emissions, stalled climate accountability legislation, spent billions in subsidies for Big Oil, bought a pipeline that Canada’s own federal agencies say is incompatible with climate action, and failed to deliver a Just Transition Act.

We can’t afford to wait for Justin Trudeau to start governing like we’re in a climate emergency. Nor can we wait several years for the NDP or the Green Party to build enough power to form government. Under our broken voting system, a Climate Emergency Alliance is our best option for bold climate action like a made-in-Canada Green New Deal.

The Green Party and NDP should form a Climate Emergency Alliance and pledge to do everything in their power to tackle the climate crisis with the urgency it demands. We’re calling on both parties to work together in the next federal election to elect as many climate champions as possible. Then work across party lines to pass climate emergency-level legislation that science calls for.

Despite failing to reduce emissions, presenting a climate plan that is half as ambitious as science demands, failing to deliver a promised Just Transition Act, and falling short on environmental justice and Indigenous rights, 71% of Canadians believe that the Trudeau government is either “good” or “acceptable” when it comes to climate action. In other words, we need to overcome the perception that Trudeau is doing enough to tackle this crisis.

We need more than a policy shift. We need a massive political shift.

That political shift can only come through an unprecedented Climate Emergency Alliance between the NDP and the Green Party. In this Alliance, both parties would come together under the promise to do anything and everything to tackle the climate emergency at the pace and scale that science and justice demand. Not only would they work across party lines in Parliament, they would work together during the election to elect as many climate champions as possible.

How it can work

In ridings where one party has a chance of winning and the other is sitting in third or fourth place, the trailing candidate would stand down and throw their support behind the other, all under the banner of the Climate Emergency Alliance.

In ridings where the NDP and Green candidates are running first and second, the race could be a sort of Climate Primary where the parties run vigorous campaigns that challenge each other to be bolder on climate action.

It’s simple. The Liberal Party has shown an unwillingness to deliver the ambitious climate action we need. Neither the NDP nor the Green Party can deliver on climate alone. But, together, the NDP and Greens can forge a Climate Emergency Alliance that will transform the conversation about the scale of climate action we need in Canada. Through an alliance, they can elect enough climate champions to give us a chance and in doing so, increase each party’s seat count and vote share.

With the climate crisis on our doorsteps, we need to rally behind big bold ideas like a Climate Emergency Alliance. The Liberal Party is unwilling to deliver the ambitious climate action that we need and neither the NDP nor the Green Party can deliver on climate alone.

The 350 Canada paper — The Case for a Climate Emergency Alliance — presents a strong case why an Alliance has “a fighting chance” to move Canada into a climate leadership role. Canadians want their politicians to put people and the planet first, not the fossil fuel industry. For full details including the numbers and modelling, see the full report here.

To get involved or to volunteer, go the the Climate Emergency Alliance website or click on the buttons below.

Katie Perfitt of 350 Canada was a recent guest speaker on the Time4Action webinar series along with Real Lavergne of One Time Alliance for Democratic Reform. You can view the
“A Green-NDP One-Time Electoral Alliance for Climate” video here.

To view the entire webinar series, click on the image above.