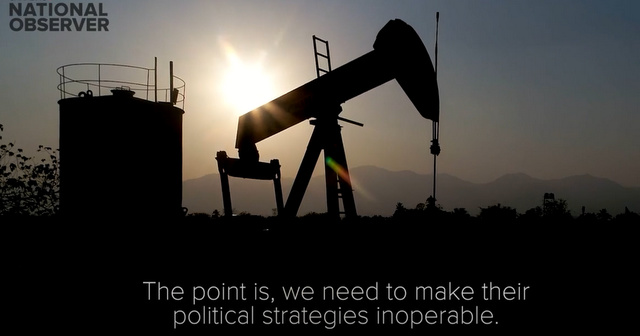 The fossil fuel industry has spread its tentacles into every aspect of our lives. Evidence of its power and influence is everywhere—our governments, institutions, banks, boardrooms, and of course our personal lives. At the same time, we understand that the use of fossil fuels has brought us to the brink of an unprecedented existential threat—the climate crisis. And the enemy is the fossil fuel industry. In the following piece, Seth Klein, author of A Good War, says we must stop playing nice with the fossils. Before it’s too late.

(This article by Seth Klein was previously published in the National Observer and The Climate Emergency Unit website.)

In the face of the climate emergency, this is the time of our Phony War. Most of us know the battle for our lives must soon get underway, and most of our leaders — in government and industry — are now talking tough on climate. But in deeds, they aren’t there yet.

(The reference to ‘Phony War’ is from Klein’s A Good War – Mobilizing Canada for the Climate Emergency. He writes that historians have come to refer to the first year of the Second World War as “The Phony War” because not much was happening. Countries were training and preparing to act. “No one knew quite how and when to get things started…Everybody knew it was coming.” This is where we are now with the climate war — Editor’s note.)

May 14, 2021
YouTube licence
(Canada’s National Observer columnist Seth Klein explains how fossil fuel companies are blocking or delaying necessary climate action, and what government can do about it.)

Among the many barriers we face to a genuine climate emergency plan is a fossil fuel industry that has insidiously used its economic and political power to stall meaningful action. If this story has a villain, it is the oil and gas corporations and their leaders (not their workers) who outright lied for decades about the truth of climate change, and more recently have done everything in their power to systematically delay and divert the need for climate action. The fossil fuel industry, in pursuit of its financial self-interest and preservation, has become expert at preying on our fears, misgivings and desires.

Allow me to add into evidence some recent examples of the “natural” gas industry making mischief with needed climate action. To appreciate why what I’m about to share is so enraging, a little context: Many do not understand that the natural gas we burn in our homes and buildings (for heat, hot water and stoves) is a major source of greenhouse gases (GHGs), accounting for roughly 12 per cent of Canada’s GHG emissions.

Consequently, fuel-switching our buildings to electricity — mainly by means of high-efficiency electric heat pumps and induction electric stoves — represents a vital and urgent piece of decarbonizing our society and driving down GHG emissions. But natural gas utilities are employing a bag of tricks to slow the move to electrify our buildings.

Two weeks ago, E&E News exposed leaked documents that revealed many of North America’s major gas companies have been scheming to block electrification. Specifically, Eversource Energy, New England’s largest utility, in an industry presentation in March divulged it is the co-lead convener of an alliance with the straight-shooting name, “Consortium to Combat Electrification.” According to one of the leaked slides (shown here), the consortium, established in August 2020 and housed within the Washington, D.C.-based “Energy Solutions Centre,” includes 15 utilities, including two Canadian members:

In a second leaked slide, the consortium notes: “Natural gas (fossil fuel) in for fight of its life.” They are right about that. Hopefully, anyway. But they have no intention of going quietly into the night. Rather, consortium members are exhorted: “Everyone needs to contact legislators in favour of NG (natural gas),” and “Renewable Natural Gas is coming (likely will save NG business).” The slide says partners “have to continue to work together to grow this market.” The messages here cannot be accused of subtlety. They rightly see efforts, particularly at the municipal level, to ban or phase out the use of natural gas in buildings as an existential threat. “The fear of losing market share to non-fossil alternatives terrifies the gas companies,” Greenpeace climate campaigner Keith Stewart wrote in a post about the revelation, “but it should delight the rest of us.”

FortisBC was quick to issue a media release stating the presentation “does not accurately reflect our position on electrification. As a utility with both gas and electric infrastructure, FortisBC sees an important role for both the gas and electric systems to deliver lower-carbon energy to British Columbians. We believe a cleaner future is not an either/or scenario when it comes to energy — it’s ‘all of the above.’ We see gas and electric infrastructures as complementary…” Many of the other consortium members issued similar disclaimers.

Among the many barriers we face to a genuine #ClimateEmergency plan is a fossil fuel industry that has insidiously used its economic and political power to stall meaningful action, writes columnist @SethDKlein. #ClimateAction – retweeted by Keith Stewart

But as Stewart notes, the consortium’s PowerPoint presentation “says all the usually quiet bits out loud.” As he told me, “It’s always fascinating to compare the political strategy documents of these companies with what they tell the public. We should not be extending them the benefit of the doubt on any of their green claims.”

FortisBC and Enbridge are regulated monopolies — they are the only companies equipped to deliver gas within their jurisdictions, and as such, we effectively grant them a licence to print money. The gas distribution system in B.C. used to be a Crown corporation until it was privatized in the mid-1980s (Fortis acquired the company from a previous private firm in 2007), which means a good chunk of the core infrastructure was publicly built.

Adding to the frustration, ratepayers in Ontario, Quebec and B.C. are effectively paying for these campaigns to block electrification through their utility bills, whether they like it or not. Heck, we all effectively subsidize this mischief, as contributions to consortiums such as this and related political lobbying efforts are considered a pre-tax business expense, notwithstanding that the lobbying and advertising campaigns seek to block and weaken society’s climate policies.

Last year, my family made the big switch. We abandoned our gas-fuelled space and water heating, installed an electric heat-pump system, swapped the gas stove for induction electric, and with great pleasure shut down the gas line to our home and cancelled our account with FortisBC. It was a complicated undertaking requiring research and perseverance, and even after provincial and municipal rebates, still expensive. But once done, it felt great — like we’d made an important change that was healthier for our family and better for the planet. And we’d done what the B.C. government wants people to do — fuel-switching is central to the province meeting its CleanBC climate plan target.

But then, a few months later, we received the letter below from FortisBC. Well, the red ink text we added, in an irate effort to “fix” the letter and share it — widely ­— on social media. 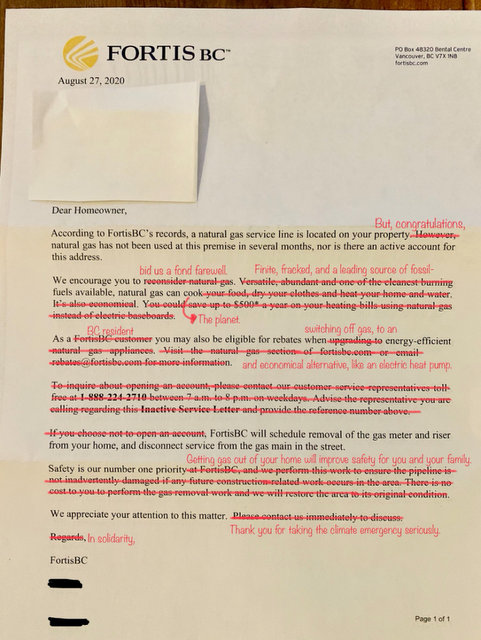 ICYMI:
There’s an Avalanche of Climate Bullshit Coming at Us
Deaths From Fossil Fuel Pollution Much Worse Than COVID