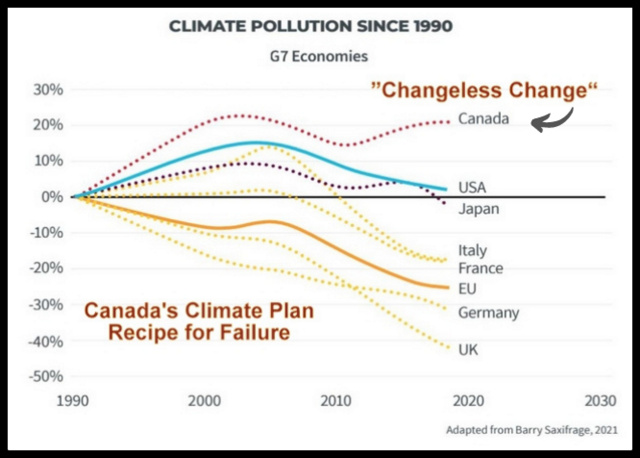 Prime Minister Trudeau is playing a poker game with the future of Canadians according to Terry Moore and David Robertson, co-authors of a recent report describing Canada’s climate plan as a recipe for failure. Trudeau is craftily appearing to be leading a sweeping transformation which is in fact a continuation of the status quo. While everything appears to change, things remain the same. It’s “changeless change”, a term coined by author Martin Lukacs in The Trudeau Formula: Seduction and Betrayal in an Age of Discontent.

Climate Ambition Is Not A Poker Game

In the space of a few days in April, Canada’s 2030 emissions reduction target under the Paris Agreement jumped from 30% to 36% to between 40 and 45%. Going into this latest round of climate ambition poker, the federal government, we were told, had already put everything it could on the table and was tapped out. But along came the White House climate summit, and Prime Minister Justin Trudeau upped the ante by another 50%.

The new target stretches credulity and has all the elements of a bluff. There is nothing in the government’s climate plan, its 2021 budget, or in any announcement since the phone call from Washington that indicates that any new cards have suddenly appeared in the Liberal climate hand. The 40-45% target simply can’t be reached with the initiatives, programs, financing, and outlook the government has on the table.

If the latest Biden-inspired upping of Canada’s climate ambition seems disconnected from actual on-the-ground government climate initiatives to achieve them, it’s not surprising. If Trudeau’s climate words and his climate deeds seem at odds with each other, it’s because they are.

There is a long-established pattern of Trudeau expressing ambitious rhetoric in international climate forums. Who can forget Trudeau’s famous declaration on the stage at the 2015 Paris Climate Summit that “Canada Is Back”? Or his very public championing of an aspirational 1.5°C cap on global warming being written into the Paris Agreement? Canada was rebranding itself as a climate good guy.

Domestically, Trudeau’s image as a climate champion was enhanced by the June 17, 2019 House of Commons resolution declaring that Canada was in a “climate emergency” but contradicted the very next day by the government’s approval of the Trans Mountain oil pipeline expansion. A pipeline his government later bought.

Throughout Trudeau’s tenure, his government has played fast and loose with climate words, promises, and numbers. The government calls for “net-zero” emissions but it doesn’t mean “zero”. It talks about “decarbonization” but it doesn’t mean “phasing out fossil fuels”. It argues that “avoided emissions” cancel out “actual emissions”. And that lowering “emission intensity” is a substitute for “absolute emission reductions”. It champions the alchemy that turns “fossil hydrogen” into a greenwashed “blue” hydrogen.

And it turns bad news into good news. The country’s latest emissions inventory report concludes that between 2005 and 2019, Canada failed to deliver on any of its commitments to reduce carbon pollution. The goal of climate policy is to reduce emissions. We haven’t done that, but according to the government, that is good news because our emissions didn’t go up. Failure has now been redefined as success.

A Recipe for Failure

The government’s plan to achieve the Paris 2030 targets, old or new, will fail. Its hope of achieving net-zero by 2050 cannot be realized on the basis of the actions currently on the table.

The Liberal climate plan relies too heavily on carbon pricing, with a minor assist from a number of climate programs such as tree planting and zero-emission vehicle (ZEV) charging stations. And Its commitment to net-zero by 2050 relies almost exclusively on fossil fuel-based hydrogen and carbon storage, with an assist from small modular nuclear reactors (or as one analyst calls them, “PowerPoint reactors”). The government’s “Fossil-First” climate action formula of carbon pricing + hydrogen + carbon storage + nuclear, is a recipe for failing to achieve Canada’s Paris targets.

Yet none of the government’s plans and actions are linked to plausible or verifiable results. Ottawa has introduced a home energy retrofit program but doesn’t say what it expects the GHG reduction results to be. Neither the planting of two billion trees nor the ZEV initiative is tied to expected results. Likewise, both the Output Based Pricing System and the $8 billion in Budget 2021 for Canada’s largest Industrial emitters are free from any emission reduction requirements.

Net-Zero Strategy Is a Distraction

Over the longer term, the net-zero strategy will fail in tandem with a predictable failure of the government’s hydrogen strategy. A number of years ago, then-PM Stephen Harper pointed to the ocean of oil under Alberta and boasted that Canada was an energy superpower. Now Trudeau is making a similar bid, this time pointing to 300 years of natural gas reserves as the basis for Canada’s status as a hydrogen superpower.

At one level, the hydrogen strategy is a lot of puffery and marketing hype masquerading as a serious climate plan. At another, it speaks to the power of the carbon lobby. In a remarkably short time, Big Oil and Gas has achieved the political and financial support to launch a multi-decade, publicly-subsidized, fossil fuel-based hydrogen program. It is a distraction that delays our transition to renewables and jeopardizes Canada’s climate goals.

That’s because Canada’s hydrogen strategy is betting on the wrong horse. To the degree that hydrogen plays a role in a future energy grid, it will be “green” hydrogen produced from renewable electricity, not fossil fuel-derived “blue” variety. As the cost of renewable energy continues to decline, green hydrogen will emerge as the competitive choice, likely by around 2030. The added costs of turning “grey” hydrogen into “blue” through an enormously expensive infrastructure of carbon storage will only serve to tip the scale further against Canada.

Other countries are now massively investing in renewables and focusing on green hydrogen. They will be well positioned to eclipse Canada in international markets as economies shift to low-carbon energy systems. Those markets will shun Canada’s high-carbon tar sands/oil sands bitumen and steer clear of Canada’s efforts to rebrand fossil hydrogen as a less carbon-intensive product. Any remaining hopes for Canada’s fossil-fueled climate plan were dashed with the May 18 release of International Energy Agency’s Net Zero by 2050 report, which calls for an end to new fossil fuel investments.

The federal government has designed a climate plan that throws a lifeline to the oil and gas sector, but its recent upping the ante to a 45% emission reduction target might change the political calculus.

Developments in the past few weeks have highlighted some troubling realities, not the least of which is that Liberal emission targets are more about political posturing than seriously addressing the climate emergency. But more important is the realization that the federal government can’t achieve the new Paris targets if it continues to insist on a Fossil First climate action formula. To have any hope of achieving the new target, the government has to adopt a Climate First plan and strengthen the Net-Zero Emissions Accountability Act, Bill C-12.

A Climate First plan requires unprecedented investments in renewable energy, energy conservation and retrofits, and the “electrification of everything”. It requires a green economic transformation based on climate justice commitments of leaving no one behind.

Now that the government has been forced back to the drawing board, it’s time for it to listen to voices other than Big Fossil. The next climate plan has to be shaped and endorsed, not by those committed to a Fossil First climate policy, but by Indigenous peoples, young people, climate action groups, unions, citizens, and communities committed to putting people and the climate first.

David Robertson and Terry Moore are members of Seniors for Climate Action Now (SCAN) and authors of the recent report The Liberal Climate Action Formula: Recipe for Failure [pdf].