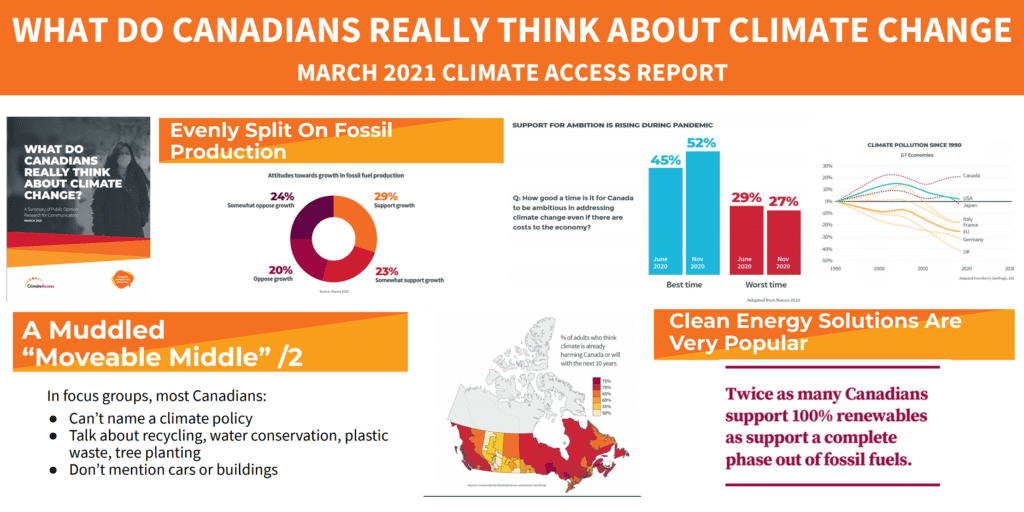 Over seventy five percent (75%) of Canadians are truly worried about climate change and want a climate action agenda that is more bold and ambitious. Unfortunately, most supporters—45% of the Canadian public—fall into the muddled “moveable middle” where the demand for action is much less than the concern over climate.

Key take-home points from a March 2021 presentation on Canadians’ opinions on the climate crisis from Climate Access were:

Think of somebody you know who’s in the moveable middle

We are clearly in a climate emergency. Most Canadians recognize that we are in crisis, but public support is not reliable. The moveable middle is an important target audience. How would you reach the moveable middle to help them better understand carbon pricing? Think of somebody you know that is in this population segment. How might you talk to them to move them from concerned to alarmed and armed with realistic ideas specifically about carbon pricing?

In case you missed it:
Carbon Capture and Storage (CCS): A Death Sentence For the Planet
Message to Justin Trudeau: Canada’s on Fire – Act Like It
Accelerating Climate Impacts Setting Off Alarm Bells Worldwide