Below 2C
Home Climate Climate Crisis URGENT: Canadians Must Speak Up on Climate 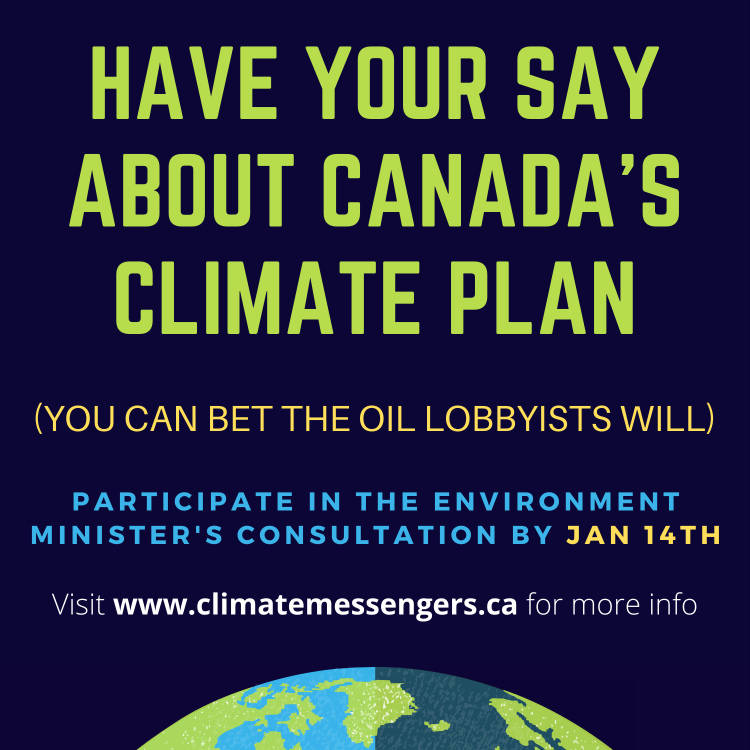 As we enter 2022, the challenges are already piling up. Canadians are facing wave 4 or 5 (I’ve lost count) of the COVID crisis but that is far from the worst of it. We face an even greater and more alarming climate crisis that threatens our very survival as a species unless drastic remedial action is taken by world governments.

Our government has launched a series of consultations to invite input—on emission reduction and climate policy—from interested Canadians as required by the Canadian Net-Zero Emissions Accountability Act.

(This following piece was first published in The Energy Mix.)

It’s Time to Speak Up on Climate

A new and loosely-knit grassroot group is trying to make it easier for Canadians to have their say on the country’s 2030 carbon reduction plan, ahead of a January 14 consultation deadline set by Environment and Climate Minister Steven Guilbeault.

The mandatory plan under the new Canadian Net-Zero Emissions Accountability Act was due to be released in late December. The legislation allowed for a three-month extension, and Guilbeault announced last month that he was taking it.

With much of the one-month consultation period colliding with the December holiday, Climate Messengers is offering a menu of options for potential participants—including sample answers to a government survey, and a toolkit to guide more detailed responses.

“This is a moment of opportunity, because the Minister must consult us before he establishes the plan,” the group states. That’s why it’s “very important that regular Canadian citizens who are concerned about climate change participate in these consultations. By adding your voice, you help to press the government to act with sufficient speed and sufficient strength.”

The group cites the government’s recent consultations on its new Net Zero Advisory Body as a moment when oil and gas interests weren’t shy about trying slow down the government’s climate response.

“The fossil fuel lobby has large and well-organized groups of individuals who oppose climate change action,” Climate Messengers writes. “Some register their denial that man-made climate change is real. Others say we must go slow, while making as much profit from Canada’s fossil fuels as possible. Together, they act as a powerful force on the government to move too slowly on plans that are too watered down to make the big GHG reductions that matter.”

The Climate Messengers toolkit includes a direct link to the federal survey, a set of sample answers, a backgrounder on the consultation process, details on each of the main subject areas in the survey, and a step-by-step walk-through.

The toolkit only began rolling out this week, but Below 2°C publisher and Climate Messengers member Rolly Montpellier said it’s generating a quick response. “There’s a real appetite for this kind of tool, and we’re providing it,” he said. “This is a very important consultation, and there’s a real feeling that people want to respond to it.”

While Ottawa currently has a half-dozen climate consultations in progress—at least five of them concluding this month—Climate Messengers sees the January 14 deadline as the most important one, since it feeds into Guilbeault’s March 29 report on how the government will meet its 2030 emissions reduction target.

Get the Toolkit here

Update: at the time of publishing, over 75 groups, individuals, organizations, politicians have received the Toolkit and many groups have done their own outreach to their respective membership. We estimate that the Toolkit will reach thousands of Canadians who are eager to participate in Canada’s climate future. Now they have the tool to do it.