Below 2C
Home Socio-Politico Finance Backsliding on Climate: The World Was Right To Be Skeptical 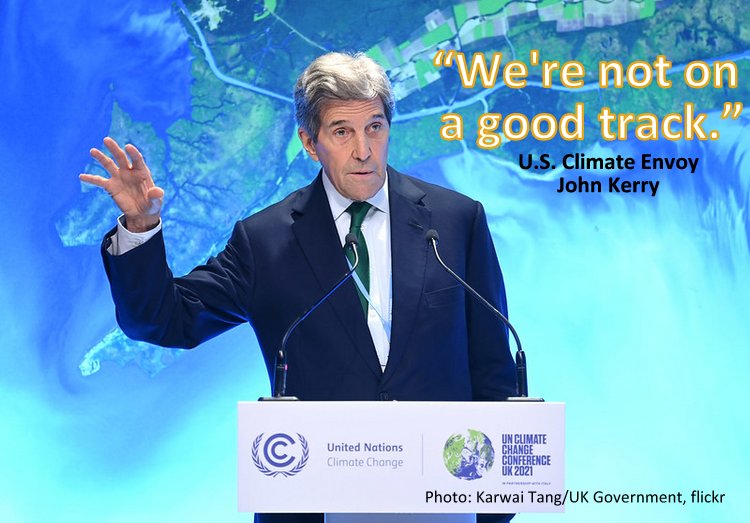 “The political will for painful choices is evaporating fast…turns out the world was right to be skeptical,” Bloomberg writes about expectations coming out of the Glasgow COP26 climate summit.

(The following post by Mitchell Beer was previously published in The Energy Mix.)

With Bloomberg News declaring that governments’ “Great Climate Backslide” has begun, recent reports show major banks pouring more than a trillion dollars into oil, gas, and coal, even as they scramble to burnish their green credentials.

Just months ago, COP 26 President Alok Sharma praised countries’ “heroic efforts” to tackle the climate emergency, marking the end of a marathon, two-week negotiating session that delivered mixed results at best. In late January, Sharma warned that even that limited progress will “wither on the vine” without urgent action.

“Turns out the world was right to be skeptical,” Bloomberg writes. Three months after the COP, “a toxic combination of political intransigence, an energy crisis, and pandemic-driven economic realities has cast doubt on the progress made in Scotland. If 2021 was marked by optimism that the biggest polluters were finally willing to set ambitious net-zero targets, 2022 already threatens to be the year of global backsliding.”

Bloomberg points to fossil fuels making a comeback in the United States, China, Europe, India, and Japan, with clean energy stocks “taking a hammering”, prospects for a faster transition to renewable electricity “looking grim”, and emissions rising in 2021.

“That’s even as renewable energy costs have fallen rapidly and investment in clean technologies is soaring, while voters across the world demand stronger action,” the news agency writes.

Bloomberg has a rundown on the discouraging news in different countries—without even factoring in recent news on where big banks are directing their investment dollars.

One of the big highlights at COP 26 was the launch of the Global Financial Alliance for Net-Zero (GFANZ), a group of investors with more than US$130 trillion in their control that committed to a 2050 net-zero target. “It’s a mammoth transition,” said UN climate finance envoy Mark Carney, a former governor of both the Bank of Canada and the Bank of Canada, in a CBC interview in Glasgow. “We have banks, asset managers, pension funds, insurance companies from around the world,” so “one of the key messages of this COP is: the money is there.”

But GFANZ only managed to bring together that much financial clout by assuring participating institutions they could set their own pathways to achieving net-zero, with or without a commitment to end fossil fuel investment, The Energy Mix reported at the time.

“There’s not a rule about fossil fuel financing because it’s up to individual banks how to get to that trajectory,” a GFANZ spokesperson told The Mix. The initiative’s underlying assumption is that “no one knows a bank’s portfolio like they do,” he added.

In subsequent conversations, the spokesperson outlined in more detail how GFANZ hoped to prompt its members toward more effective emission reduction investments. But so far, institutions seem to be pursuing a business-as-usual approach that ignores the latest urgings from the Intergovernmental Panel on Climate Change and the International Energy Agency.

Even BlackRock, the world’s largest investment manager, which has been running premature victory laps and taking hits from the fossil industry for its support for a transition off carbon, maintains the process will be slow and gradual.

“Today there is a significant degree of uncertainty about the transition,” wrote a group of BlackRock executives that included vice chair Philipp Hildebrand and Mark Wiedman, head of international and corporate strategy. “The issue, however, is no longer whether the net zero transition will happen but how – and what that means for your portfolio.”

Yet their recent note to investors “told clients that financial markets are just starting to price in the effects of climate change, which creates significant investment opportunities in industries including oil and gas,” Bloomberg reported earlier this month.

On Monday, London, UK-based ShareAction listed 25 leading European banks that extended US$55 billion in financing to oil and gas expansion projects last year, Reuters reports. $33 billion of that came after the institutions joined the United Nations-backed Net-Zero Financing Alliance in April, The Guardian writes, and more than half of that total was from four of the alliance’s founding members: HSBC, Barclays, BNP Paribas, and Deutsche Bank.

The European banks’ fossil financing since 2016, the year the Paris climate agreement came into force, stands at $406 billion.

“We’re in trouble…We’re not on a good track.” — U.S. Climate Envoy John Kerry

The banks’ continuing support for their fossil industry clients ignores the deepening hole they’re digging themselves into. “If oil and gas demand decreases in line with 1.5°C scenarios, prices would fall and assets become stranded,” ShareAction senior research manager Xavier Lerin told The Guardian. “On the other hand, if demand did not fall enough to limit global warming to 1.5°C, the economy would suffer from severe physical climate impacts. Either way, value will be destroyed for energy companies, banks, and their investors.”

And yet, “highlighting the pushback from international investors keen to limit the costs of shifting away from fossil fuels, a report last week by the accountants EY found that 70% of UK firms admit they have encountered resistance from investors and shareholders about their plans to reduce emissions,” The Guardian adds, “with 42% saying their shareholders want them to wait for competitors to act first.”

Then yesterday, an update to the Global Coal Exit List maintained by German non-profit Urgewald showed financial institutions funnelling $1.5 trillion into the coal industry between 2019 and 2021, despite many of them issuing net-zero pledges, Reuters reports.

“Banks like to argue that they want to help their coal clients transition, but the reality is that almost none of these companies are transitioning,” said Katrin Ganswind, the group’s head of financial research. “And they have little incentive to do so as long as bankers continue writing them blank cheques.”

Urgewald said 85% of the funding came from banks in six countries—China, the United States, Japan, India, the UK, and Canada. Stand.earth says Canadian banks shelled out more than C$127 billion, including $25.5 billion to Canadian coal companies. The Royal Bank of Canada leads the pack, with $14 billion in loans and financing for thermal coal and $83 billion in bonds and shares.

“While communities across Canada and around the world experience devastating climate impacts from fires to floods, Canada’s fossil banks continue to finance coal-related companies to the tune of roughly $100 billion,” said Stand Climate Finance Director Richard Brooks. “In 2022, RBC financing fossil fuels while spouting sustainability is like handing out cigarettes while warning about the dangers of smoking.”

But the mounting evidence of a Great Climate Backslide hasn’t stopped a leading green rating agency from “rewarding some of Wall Street’s biggest banks, even though they continue to lend billions of dollars to fossil fuel companies,” Bloomberg writes. MSCI Inc., which ranks corporations globally on environmental, social, and governance (ESG) criteria, has issued rating upgrades to Wells Fargo & Co., Citigroup Inc., and Morgan Stanley, among others, after the three big institutions arranged a combined US$74 billion in new fossil fuel financing.

A Bloomberg News analysis of MSCI data showed 13 of 22 institutions getting upgrades, while only three were downgraded—largely because the ratings are based on the proportion of a bank’s total portfolio devoted to fossil fuels. “For example,” the news agency explains, “if a bank lent billions to an oil company but those loans represented a small part of its overall lending, MSCI would consider the bank to be greener—and worthy of a rating upgrade—compared with one that lent millions but whose loans accounted for a larger part of its overall portfolio.”

MSCI markets its green ratings as a way to “build better portfolios for a better world,” Bloomberg notes, maintaining that the assessments “are used by institutional investors to better understand a company’s exposure to financially relevant ESG risks, not to measure a company’s total climate impact—we have other tools and data for that purpose. We are explicit about this investment management purpose and investors using our ratings understand and agree with our approach.”

ICYMI:
Cities for a Fossil Fuel Non-Proliferation Treaty
Clean Energy: An Idea Whose Time Has Come
Shameful: Canada Is a World Leader for Fossil Fuel Finance