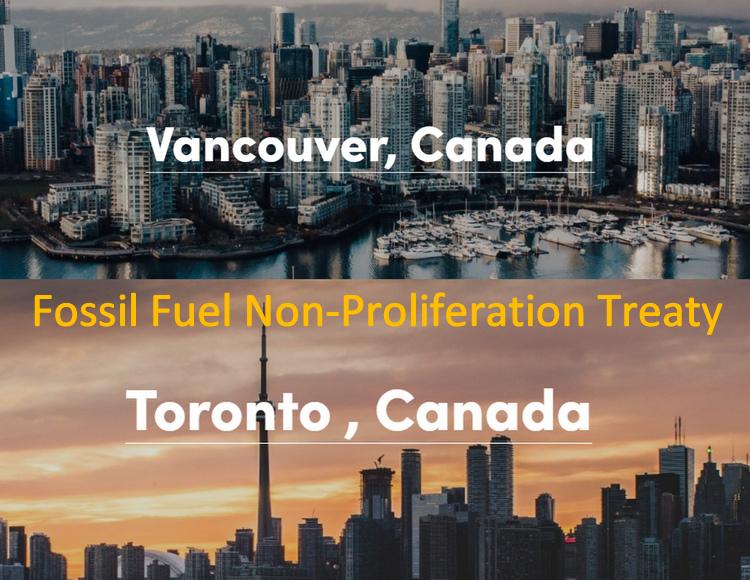 In October of 2020, Vancouver became the first city in the world to endorse the Fossil Fuel Non-Proliferation Treaty (FFNPT). Then in 2021, Barcelona, Los Angeles, Sydney, Toronto, Bonn, Glasgow, Dhulikhel in Nepal, 7 cities in Costa Rica and the Australian Capital Territory also signed on. And just days ago, Amsterdam joined 34 other municipal governments that have committed to act in accordance with the climate emergency by ending fossil fuel production.

Cities are on the frontlines of the climate emergency.

For some, this means more heatwaves and shorter cold seasons while those closer to the equator will face wetter rainy seasons and hotter dry seasons. Sea level rise threatens most coastal cities.

These life-threatening changes are happening now. In response, cities and sub-national governments around the world are making bold moves to phase out the leading cause of the climate crisis: fossil fuels.

Just as nuclear-free cities played a critical role in building momentum towards a treaty banning weapons of mass destruction, now councils around the world are uniting to call for a Fossil Fuel Non-Proliferation Treaty. 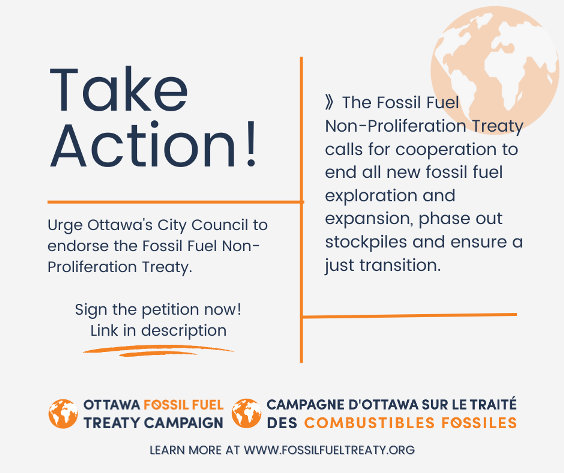 In Ottawa, organizers are pressuring City Council to endorse the call for a Fossil Fuel Non-Proliferation Treaty. As the nation’s capital, Ottawa should exercise a leadership role by joining Vancouver and Toronto which have already endorsed the treaty, along with over 30 cities globally.

Please sign the petition urging Ottawa City Council to formally endorse the Treaty and share with your family and friends!

And it’s not just Cities

Parliamentarians’ Call for a Fossil Fuel Free Future is a group of nationally elected officials in Africa, Asia, Latin America, and the Pacific calling on other parliamentarians worldwide to speak as one in calling for decisive action on a global transition away from coal, oil and gas – the source of 80% of carbon dioxide emissions since the industrial revolution. The Parliamentarians’ Call sets out key demands, calling for new levels of international cooperation, as well as commitments and treaties complementing the Paris Agreement.

More than 2,000 scientists and academics are calling for a FFNPT. In September of 2020, over two thousand academics across disciplines and from 81 countries delivered a letter demanding a Fossil Fuel Non-Proliferation Treaty to manage a global phase out of coal, oil and gas to governments gathering at the UN General Assembly.

In the open letter, the academics recognized that the burning of coal, oil and gas is the greatest contributor to climate change and added that, “air pollution caused by fossil fuels was responsible for almost 1 in 5 deaths worldwide in 2018”.

Health Institutions representing more than 100,000 doctors in South Asia have endorsed the Fossil Fuel Treaty. Doctors and medical practitioners representing some of the largest associations and networks of public health professionals today have called upon South Asian Governments to phase out fossil fuels – oil, gas and coal – to avert the twin crisis of air pollution and climate change.

More on the FFNPT here:
We Need A Fossil Fuel Non-Proliferation Treaty

There are a number of Cities Campaign Resources to support you in encouraging your local government to endorse the Fossil Fuel Non-Proliferation Treaty.

In addition to these resources, the Fossil Free Cities Toolkit outlines 17+ key steps city councils can take to help phase out the one cause of climate change: fossil fuels.

ICYMI:
We Need A Fossil Fuel Non-Proliferation Treaty
Clean Energy: An Idea Whose Time Has Come
Shameful: Canada Is a World Leader for Fossil Fuel Finance