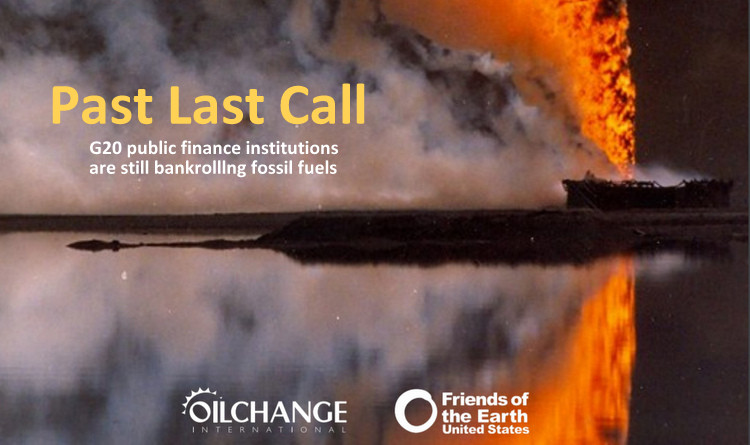 We Canadians have the dubious honour of being a world leader in financing fossil fuels and  the worst offender of all G20 nations. Just prior to the COP26 summit, a new report – Past Last Call: G20 public finance institutions are still bankrolling fossil fuels – exposed Canada as a huge laggard if one measures climate leadership in terms of where a government invests its public dollars. In other words, is our government putting its money where its mouth is. The answer is an ear-splitting NO.

There is so much going in the wrong direction for Canada’s energy strategy. The Past Last Call report shows that Canada provided the most public finance for fossil fuels—USD $11 billion per year—between 2018 and 2020. The total for the G20 was $63 billion per year.

“Per capita, we’re often the worst…But to be the absolute worst, with a much smaller economy and much smaller population, is even more shameful. — Julia Levin,  Environmental Defence

Key findings of the report

“Good news, but Canada must also end its support for fossil fuels at home, or else it will continue to exacerbate the climate crisis.” — Patrick Bonin, Greenpeace Canada

At COP26, Canada joined the US, UK and 21 other countries and institutions to end direct international public fossil fuel finance for unabated coal, oil and gas and prioritize clean energy finance by the end of 2022. That COP commitment seems to be holding. In a recent article, the Globe and Mail reported that “a global movement to permanently separate the oil and gas industry from the public purse appears to be gaining momentum, with an overarching objective of repurposing funds to promote renewable energy.”

The devil is always in the details

Key words like “inefficient fossil fuel subsidies” and “phase out and rationalize”—found in the fine print of a 2009 G20 commitment—have provided a lot of wiggle room. Canada has yet to declare any fossil fuel subsidy as “inefficient” even following a 2019 discussion paper which “identified 36 measures that might be considered subsidies” according to the Globe and Mail.

In the more recent Glasgow commitment to “end new direct public support for the international unabated fossil fuel sector by the end of 2022,” the word “unabated” is “a sneaky loophole” Julia Levin told the Globe. “It leaves a window open for governments to say, ‘Hey, we’re going to support this oil and gas refinery because there’s a promise of one day attaching carbon capture technology.’”

During the recent election campaign, the Liberals promised “to accelerate our G20 commitment to eliminate fossil fuel subsidies from 2025 to 2023.” The Prime Minister’s Mandate Letter to Minister of Environment and Climate Change Steven Guilbeault reinforces that promise.

“Work with the Deputy Prime Minister and Minister of Finance, and with the support of the Minister of Natural Resources, to accelerate our G20 commitment to eliminate fossil fuel subsidies from 2025 to 2023, and develop a plan to phase out public financing of the fossil fuel sector, including by federal Crown corporations.”

The main driver of the climate crisis is the burning of fossil fuels. The world needs to rapidly scale up the transition away from fossils and support a massive increase in renewables funding in order to get back on the 1.5°C pathway. Technologies such as CCUS (Carbon Capture, Usage and Storage) and SMRs, (Small Nuclear Reactors) which are both enthusiastically supported by Canada’s government, cannot offset the emissions arising from the climate-wrecking expansion of oil and gas production. Quite the opposite, they represent a deadly and risky facilitator of the status quo.

ICYMI:
We Have Left It Too Late
Ontario and Doug Ford’s Bogus Climate Plan
Reversing the Trend on Ads For Gas-Powered Cars, SUVs, Light Trucks