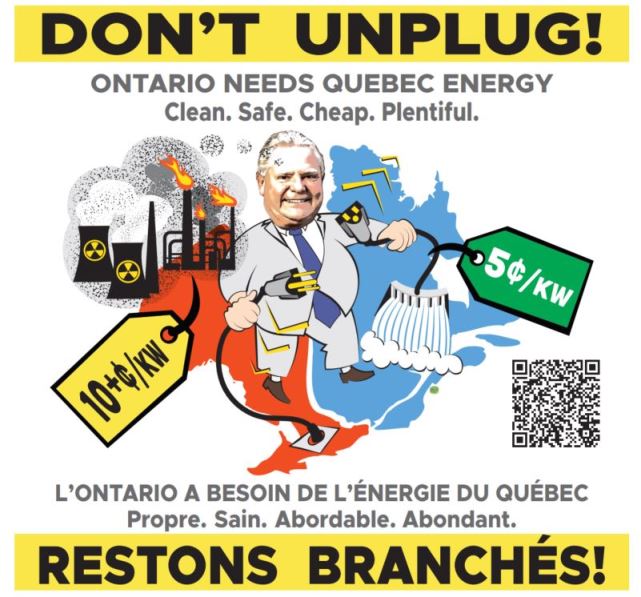 The last thing our climate needs is more gas. But that’s exactly what the Premier of Ontario is planning to do. Doug Ford wants to unplug the province from clean hydro power from Quebec and build more natural gas-fired power plants instead. It’s #climatelunacy. And he must be stopped. Tell Ford: Don’t Unplug!

(The following was first published as Ontario turns its back on Quebec waterpower while firing up gas.)

Hard on the heels of claiming that the province has no choice but to build more climate-wrecking gas plants, the Ontario government has pulled the plug on its seven-year Ontario-Quebec Electricity Trade Agreement to import low-cost waterpower from Quebec.

The contract signed by the previous Wynne government allowed Ontario to import up to 500 megawatts of power on a guaranteed basis from Quebec. That’s just a tiny fraction of the power Quebec has available, but it was a start on breaking down the largely political barriers that have kept us from realizing the full potential of cooperation with our energy-rich neighbours.

The decision to not renew the contract speaks volumes about the current government’s willingness to go to great lengths to protect the fossil gas and nuclear industries. They know these sources cannot compete with power from Hydro Quebec, which exported clean waterpower at an average price of just 5.3 cents per kWh last year – that is half the price of electricity from the Pickering Nuclear Station.

It seems our political leaders would much rather protect our high-cost nuclear industry than build a modern integrated system that would lower ratepayers’ bills.

Now Energy Minister Todd Smith says Quebec is welcome to participate in upcoming competitive procurement opportunities. Why then is there no competitive process when it comes to building an unproven new nuclear reactor in the GTA, or for rebuilding the ancient Pickering Nuclear Station?

If the Ontario government really does get serious about creating a level playing field for all energy options – which we would fully support – we will see a very different outcome than sweetheart sole-source deals for nuclear projects and continued expansion of fossil gas. But don’t hold your breath. We have seen again and again how our energy planners are willing to stack the deck to get the solutions they favour.

And once again Energy Minister Todd Smith makes pie in the sky claims that Quebec will run out of power soon. This will come as news to a province that has signed mega export deals with its American neighbours but can’t deliver the power due to opposition to building transmission lines. (ON and QC already have the transmission lines!)

In addition, QC could free up more of its heritage waterpower for export to Ontario by investing in energy efficiency, low-cost solar and wind power. It is also embracing its role of using its massive reservoir system as a giant battery for solar and wind power, something Ontario should be taking advantage of instead of ignoring.

More closely integrating the Ontario and Quebec power systems makes all kinds of sense, and the federal government has put money on the table for increasing transmission linkages. It’s time for Ontario to pull its head out of the sand and look east to see the future rising.

It is time for the federal government to step in with strong regulations to require a zero carbon electricity grid and not let Ontario slip massive gas plants through regulatory loopholes.

Ontarians are beginning to react to Ford’s nightmarish plan to expand natural gas plants, a decision that will wipe out all emission-reduction gains realized from the closing of coal-burning power plants in recent years. A group of concerned Ottawa citizens is planning the Electrical Cord action on November 19 to protest the Ford plan to cut off hydro power from Quebec.

Join this action if you can. More info available on Facebook Event page.

ICYMI:
Seventy Percent Of Canadians Want an Emissions Cap on Oil and Gas
Five Ways for Canada To Transition the Oil and Gas Sector
Framing Climate Action as “Economic Readiness” Is Best