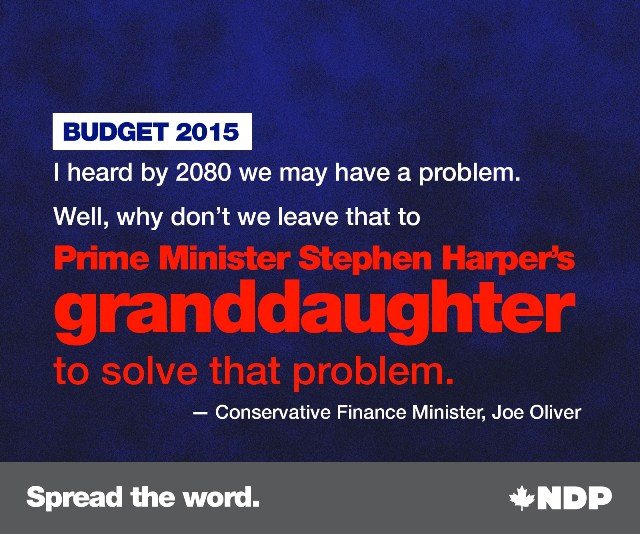 “Since when does Canada burden our grandchildren instead of building for them?” Liberal leader Justin Trudeau asked in the daily Commons question period.

“Leave it to our grandchildren. Really?” NDP Leader Thomas Mulcair said in the Commons.
“I have grandchildren and like so many grandparents I do not want to leave the responsibility for cleaning up the Prime Minister’s mess to my grandchildren,” he said. “Stephen Harper’s broken his pledge to the G20 to end fossil fuel subsidies by opening up a new fossil fuel subsidy to LNG,” said Elizabeth May….maybe they forgot LNG is a fossil fuel.”

New Climate Policy for Canada – Leave the Problem for our Grandchildren.

The Harper government has released its 2015 pre-election budget. But despite being over 500 pages in length, there’s not a single reference to climate change. But wait! There is an implicit, perhaps well concealed, climate policy if one reads between the many lines of the budget document.

This long-awaited climate policy was released by Minister of Finance Joe Oliver as he responded to journalists. “I heard by 2080 we may have a problem. Well, why don’t we leave that to Prime Minister Stephen Harper’s granddaughter to solve that problem?” So there you are, the long-awaited strategy on tackling climate change. It was worth the wait. Pretty impressive!

I’m the grandfather of four “grand” children. I, and millions of other Canadians, do not want to pass on problems we have created to future generations. That would be grossly irresponsible and morally reprehensible. The covenant has always been to leave the world a little better than you found it. Clearly Mr. Oliver has never heard of this unwritten rule. Or perhaps he has no children or grandchildren of his own. If he does, I feel sorry for them.

His remark about Mr. Harper’s future granddaughter is in poor taste. He is most certainly a very poor communicator but even more importantly he’s ignorant of the climate science. Is he not aware that Canada has been a laggard in international climate talks? And is he not aware that Canada is under pressure to act on climate by the United Nations and the entire international community?

A recent poll conducted by the David Suzuki Foundation shows that 98 percent of Canadians believe nature is essential to our survival and 64 percent say government should enforce strong standards to protect the environment.

I was one of the 25,000 marchers in the “Act on Climate” march in Quebec City on April 11th. The call for action on climate was loud and clear in Quebec and will be a critical issue in this election year.

Passing the buck to our grandchildren will not work Mr. Oliver. Canadians do not expect future generations to clean up the mess created by Stephen Harper’s Conservative government.We are now in an election year, the campaigning is already underway. I and millions of other Canadians will do everything in their power to discourage voters from supporting Stephen Harper’s Conservatives.

The Harper government has destroyed much of what is precious and dear to Canadians – our history of environmental stewardship, our world class scientific research, our democratic rights and principles and most importantly, the notion of truth.
________