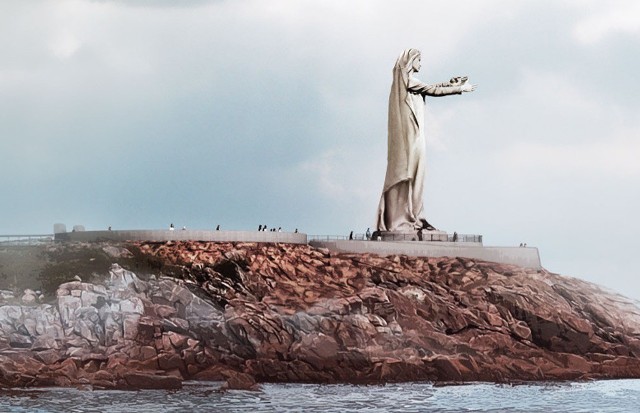 The Mother Canada project is a controversial eight-storey war memorial proposed for Green Cove in the Cape Breton Highlands National Park. The plan has been proposed by the Never Forgotten National Memorial Foundation which has been set up to raise $25 million dollars to develop the site. The main attraction will be a woman 24-metres in height with her arms outstretched toward Europe.

The plan also includes parking for 300 vehicles, a restaurant, souvenir shop and an interpretive centre. The project, which is the brainchild of a Toronto businessman, has received strong Harper government support with a donation of the park land and $100,000 from its park budget.

The National Observer reports that “the project cost for the memorial, locally dubbed “Mother Zombie” because of its outstretched arms, is estimated to be anywhere between $25 to $60 million.

“Offensively Tasteless” and a “hubristically arrogant act of arrogant unoriginality” is what the Globe and Mail has called the Mother Canada project proposed for the Cape Breton Highlands. The Globe an Mail claims that Canada does not need another monument to honour its war deads some 80 years after the last great war. The paper wrote:

Mother Canada is merely an oversized knock-off of the mournful Canada Bereft statue created for the 1936 Vimy Memorial – as if, 80 years later, far from the bloody battlegrounds of the Great War, in a very different Canada, the only artistic adjustment required was to scale up, way up….The bigger-is-better approach to art is best left to Stalinist tyrants.

The most persuasive is that this towering Colossus of Wars, meant to memorialize Canada’s military dead through the image of a shrouded, beckoning female figure, should never be imposed on a national park.

A citizens group called Friends of Green Cove strongly opposes the project. Sean Howard, who is a spokesman for the group and a political science professor at Cape Breton University, accuses the government of supporting a monument of a “kitsch glorification of war”. There are environmental concerns that the development will destroy the iconic ocean lookout and ecological heritage of the seaside treasure.

Another strong opponent is Valerie Bird, a 93-year old war veteran. She says the statue is “vulgar and ostentatious…It doesn’t do anything for veterans or definitely not for the people who are dead. I think the idea of this horrible thing offends veterans,” she added. “I find it difficult to find words. This is a monstrosity.”

Parks Canada is reviewing more than 6,000 comments generated during a public consultation process. The next step will produce a final environmental assessment of the project and a recommendation to the Harper government.

I’m not the least surprised that Harper’s Conservatives got behind the Mother Canada plan which “symbolizes the welcoming home of over 114,000 souls that are buried in 2,500-plus cemeteries around the world from Hong Kong to Belgium,” claims retired major-general Lewis MacKenzie, one of two foundation ambassadors.

During Stephen Harper’s near decade in power, Canada has lost its international reputation as a peace-promoting nation. This has been replaced by a noticeable increase in Canada’s militarily profile with prolonged armed presences in Afghanistan, the ongoing saga of the botched purchase of F-35 war planes and more recently with the passage of anti-terror Bill C51 designed to protect Canadians from imaginary or non-existent terrorist threats.

I must remind the reader that this is an election year for Stephen Harper and his Cons. And it’s a well-known fact that fear and security are great motivators for a gullible electorate.

Of course, for the war-mongering Prime Minister who sees himself as “commander in chief”and a major foreign diplomatic leader, the construction of an 8-storey high structure to commemorate war and his foreign policy agenda may be just what is needed to feed the over-inflated ego of a man too full of himself.

I strongly oppose the Mother Canada project for the three following reasons:

If you agree, please join me in signing the petition on Care2. Just click on the link below.

Sign the Petition: Say NO to the Mother Canada project 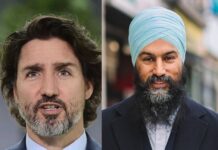